The title of this article is ambiguous. Further meanings are listed under Dahmetal (disambiguation) .

Dahmetal is a municipality in the southeast of the Teltow-Fläming district in Brandenburg . It belongs to the Amt Dahme / Mark , which has its administrative seat in the city of Dahme / Mark .

The community is located in Niederen Fläming in the Dahme valley , about 45 kilometers southeast of the district town of Luckenwalde .

The community is divided into three districts:

In addition, there are the Haidemühle, Neumühle and Rothemühle residential areas .

The community emerged on December 31, 2001 from the voluntary amalgamation of the previously independent communities of Görsdorf, Prensdorf and Wildau-Wentdorf.

Territory of the respective year, number of inhabitants: as of December 31, from 2011 based on the 2011 census

The community council of Dahmetal consists of eight community representatives and the honorary mayor. The local election on May 26, 2019 resulted in the following distribution of seats:

Hartfelder was elected in the mayoral election on May 26, 2019 with 78.8% of the valid votes for a further term of five years without an opponent.

The coat of arms was designed by the heraldist Frank Diemar .

The municipality's flag is striped green - white - green (1: 4: 1) and has the municipal coat of arms in the center. 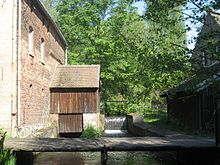 In the municipality there are a total of seven water mills along the Dahme river, some of them in their old condition, some of them renovated. Seen from the source, the first is in Prensdorf, then the Bachmühle in Görsdorf, the next in Liedekahle and the Rote Mühle before Wildau-Wentdorf. There are three watermills in Wildau-Wentdorf: the Dammmühle, the Neue Mühle and the Heidemühle, also known as the paper mill.

A cultural summer takes place every summer in the Neue Mühle Dahmetal.

The community is touched by the flaeming skate . It is the largest continuous route of its kind for inline skaters and cyclists.

Cities and municipalities in the Teltow-Fläming district