The former Angerdorf is located in the south of Berlin and extends as far as the state border with Brandenburg and its districts of Teltow-Fläming and Dahme-Spreewald .

Lichtenrade is historically rural. The shape of the old village green can still be seen today. It is surrounded by many trees, so that it looks like a small park. In its center are the village church Lichtenrade and the village pond (Giebelpfuhl) , which is so big that ice hockey can be played on it when the ice is thick. It is the largest surviving village pond in Berlin. The village green, along with those of Marienfelde and Lübars , has retained its closed village character most of all.

After the Teltow rural community was incorporated into Greater Berlin in 1920 , the arable land was gradually built with single-family houses. The prerequisite for this was the construction of the Dresden Railway , which was given a stop in Lichtenrade in 1883. Bahnhofstrasse , which is still Lichtenrade's shopping center today, was created to connect the village and the stopping point . The basis for the further expansion of Lichtenrad was the construction of the underground Lichtenrader-Lankwitzer rainwater collecting canal (Lilaresa) in 1928/1929, which prevented the swampy area from being flooded and drained an area of ​​2000  hectares . In the 1960s and 1970s, several high-rise settlements were built: Petruswerk-Siedlung (Bornhagenweg), Lichtenrade-Mitte (John-Locke-Siedlung, Steinstraße) and Lichtenrade-Ost (Nahariyastraße). In order to offer the people living in Lichtenrade-Ost more opportunities to relax, the Lichtenrade Volkspark was created from 1979 , mainly through a local citizens' initiative.

In 1953, a Bronze Age hoard from around the 18th century BC was found at Pasinger Straße 27 during construction work . Discovered. So this treasure find is around 3000 years old.

Founded around 1230, the village was first mentioned as Lichtenrode in 1375 in the land register of Emperor Charles IV . The name is said to be derived from "Lichtenrode", a clearing created by clearing . The village church was built as a simple stone church on the village green at the beginning of the 14th century . Although Lichtenrade together with the villages Marienfelde, Mariendorf Tempelhof 1920-2000 the Tempelhof district formed, is Lichtenrade, unlike other than the three villages, no incorporation of the Knights Templar . In 1375 the village had 67  hooves (a number well above average), four of which were parish hooves and one church hoof. Six hooves were freed from bede and tithe ; a Lehnschulze was not mentioned until 1536. In 1375 there were seven farms and one jug . The rights to taxes and services were widely distributed in 1375: Johann von Wulkow, the (widow?) Posin from Dallgow , the heirs of C. Lietzen from Berlin . In later years those of Krummensee , the citizens Donner and Schaum from Berlin and Cölln and the Margrave are named. From 1508 the cathedral chapter from Berlin had rights to the village; they were valid until 1872 and have been preserved in the street name Im Domstift .

The place developed and its population multiplied in the 19th century. In 1858 there were 18 farm owners and in 1900 there were already 75 houses. The elementary school built on the village green in 1898 had 238 students in five classes. In 1911 two more classrooms had to be opened. On February 6, 1906, the Lichtenrade volunteer fire brigade was founded. In 1920 Lichtenrade was incorporated into Greater Berlin, along with many other towns and cities, and became part of the Tempelhof district. At that time Lichtenrade had 4,836 inhabitants (today: almost 50,000).

During the Second World War , a branch of the Sachsenhausen concentration camp was maintained in Lichtenrade . Since 1941 prisoners of war from Ukraine were housed in the camp. There is also a memorial in Bornhagenweg. The railroad tracks are to transport to distant Auschwitz associate ; However, the Lichtenraders were only separated from the forced laborers by barbed wire in everyday life , with whom they had direct contact even when they were employed in rural agriculture.

The district attracted nationwide attention in 2010 and 2011 through demonstrations in which up to 6,000 people took part every week to protest against changes to the flight route plans of the German air traffic control for the new Berlin Brandenburg Airport in Schönefeld . In addition to the constituency member of Tempelhof-Schöneberg, Jan-Marco Luczak , guest speakers included the Governing Mayor of Berlin , Klaus Wowereit and Renate Künast , the then top candidate of the Berlin Greens .

The Lichtenrade village church with its distinctive gable roof 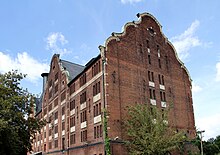 The former malt house of the Schöneberg Castle Brewery

The Lichtenrade village church from the 14th century stands on the Lichtenrader village green . In the course of time the church was changed several times. The original Gothic pointed arched windows and the pointed arched portal on the south side of the nave , both framed with bricks, were walled up and replaced by round windows in 1769, which were larger and lighter, making it easier to read the hymnbook, as the Reformation in Brandenburg in 1539 did had brought himself. The change and relocation of the openings can still be seen in the masonry today.

The roof tower , which was only added after the Middle Ages, around 1660 , was demolished in 1810 because it was dilapidated. It was not until 1902 that the church received a new, aquadratic tower made of machine-hewn field stones with a pointed octagonal pyramid roof , accompanied by four small pointed turrets. Instead of the wooden ceiling, a barrel vault was installed in 1922 . During the Second World War , the church was badly damaged by a bombing raid on December 29, 1943 and burned down to the surrounding walls. After the war the church was refurbished. The tower received a transverse gable roof , which is still preserved today , and the ceiling was again designed as a flat wooden ceiling. In 1968 the organ was put into operation. Right next to the church is the Giebelpfuhl , which is considered the largest Berlin village pond. A memorial stone to the south of the village pond commemorates the German reunification in 1990.

The Dietrich Bonhoeffer Church was built in 1956.

The Lichtenrade malt house of the Schöneberg Castle Brewery , built between 1897 and 1899, is still located on the Dresden Railway near the S-Bahn station . This building was visible from afar before the high-rise development in Lichtenrade and is still a striking landmark today . After the brewery had ceased operations after the First World War , the building was used as a state warehouse for food reserves , especially during the Second World War and the subsequent post-war period .

Since 1883 there has been a stop in Lichtenrade on the Berlin – Dresden railway line . Only the S-Bahn is currently running on this route , a reconstruction of the long-distance line  - but without a stop in Lichtenrade - is currently underway. The opening is planned for December 2025. The final drafting of the planning approval decision by the Federal Railway Authority was planned for 2013.

In 1938 the construction of the outer freight ring began, here the route from Teltow via Lichtenrade, Großziethen and Schönefeld . The reason was that a marshalling yard was under construction in the Großbeeren area. To cross the tracks, the Lichtenrader Damm was raised like a ramp between Goethestrasse and Grimmstrasse, but initially only for today's north-south lane and the lane for the tram (line 99). The separate south-north carriageway did not begin until Goetheplatz , i.e. H. at the intersection Lichtenrader Damm / Goethestraße / Potsdamer Straße.

The S-Bahn connection to what is now Blankenfelde-Mahlow , which was interrupted after the Wall was built in 1961 , was reopened on August 31, 1992.

Furthermore, the Lichtenrade station ( Güteraußenring ) - Lra was located in Lichtenrade between July 26, 1948 and March 21, 1951 . Most of the railway systems have, however, been removed.

The tram line 99 ran - after a war-related interruption - from September 10, 1945 to October 1, 1961 via Lichtenrader Damm, Goltzstraße and Bahnhofstraße to the Wendeschleife at the Lichtenrade S-Bahn station and was replaced by the A76 bus line, which still runs this route today - as M76 - operated. Other bus routes open up the district, some with connections to the surrounding area .

At the beginning of the 1960s, the Lichtenrader Damm from Goethestrasse to Goltzstrasse was supplemented by the previously missing south-north lane. A ramp was not built for them over the outer freight ring, as this had not been in operation since 1961 at the latest. At the beginning of the 2010s, Kirchhainer Damm was finally expanded to four lanes, with a narrow median and in some cases with soundproof walls .