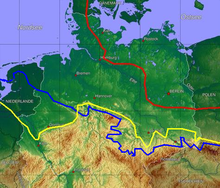 Stone churches are made of boulders in the area of foundations and foundation walls partly made - boulders - built churches , mostly village churches . The boulders collected in the fields and transported to the field edges are traditionally also called field stones in north-east Germany . One of the most representative examples of a monumental building is the Zinna monastery church .

Field stone churches are often incorrectly referred to as fortified churches , although the technical requirements for this are missing.

Field stone churches only exist in areas where the ice ages left behind such crystalline debris and which are without natural occurrence of house stones , i.e. poor in natural stone from quarries . In Germany these are Schleswig-Holstein , Mecklenburg-Western Pomerania , Lower Saxony , Saxony-Anhalt , Brandenburg (including Berlin ); in Europe: Scandinavia , Poland , Finland and the Baltic States . The boulders are usually made of granite , gneiss or quartzite and are used both hewn (square) and uncut (often split in half).

The field stone churches were mostly built during the late Romanesque and early Gothic periods . Often they are of simple architecture and often village churches . The earliest date from the 11th century. The climax of the field stone church building is to be set towards the end of the 12th century; here the careful cuboid technique dominates . Towards the end of the 16th century, the proportion of unquarified stones and bricks in the masonry increased (so-called mixed masonry ). The corresponding points in time shift in northern Germany with the advance of the German settlement in the east (Christianization); The highlight in Brandenburg is the 13th century. In the course of historicism , they were (very rarely) built at the beginning of the 20th century ( neo-Romanesque ).