Schatzalp a little above the hotel 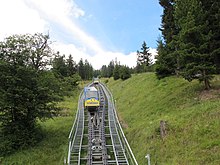 Dining room of the Berghotel Schatzalp

The Schatzalp with the hotel of the same name , at 1861  m above sea level. M. located on a south-facing terrace above Davos ( Switzerland ), is a car-free recreation area.

Countless hiking trails lead through the forests and Alps around the Schatzalp. The funicular, which opened on December 24, 1899 and was completely renovated in the summer of 2006, overcomes a height difference of 304 m. The groomed slope from the Strelapass (2350 m) down to the Schatzalp offers snowshoe and tourers a good ascent option. The toboggan run to Davos Platz is well suited for airboarders. The Schatzalp mountain hotel, the panorama restaurant at the mountain station, the Strelaalp restaurant and the Strelapass mountain hut are also in operation. For those with a head for heights, the Schatzalp - Tritt - Medergen - Arosa hike is an exciting challenge.

The Berghotel Schatzalp (today's name), built in Art Nouveau style as a sanatorium, was built by Lucius Spengler and Edward Neumann from 1898 to 1900 and is mentioned several times in Thomas Mann's Magic Mountain . Willem Jan Holsboer , pioneer of the health resort Davos, planned this building together with his sons-in-law Dr. Lucius Spengler and Edward Neumann (1866–1941), who were both chief physicians of the sanatorium one after the other until 1934 after the building was completed. Mainly tuberculosis patients from Great Britain and Germany were treated there, and internationally acclaimed successes were achieved with open thorax operations.

In the summer of 1937, the Schatzalp-Strela Schleppbahn cooperative established for this purpose built the first ski lift.

While the funicular and the two toboggan runs remained in operation, skiing on the Alp was temporarily suspended in 2003. Two of the three ski lifts in the ski area have been open again since the 2009/2010 season, and as a nostalgic ski area, the Schatzalp / Strela ski area is designed for slow driving.

Since 2008, the path from the forest sanatorium (today the Waldhotel Davos ) up to Schatzalp has been called Thomas-Mann-Weg , about 2 kilometers away ; the writer is said to have often used the path to visit his wife Katia Mann , who from 1912 on repeatedly for cures had an alleged tuberculosis in the forest sanatorium and on the Schatzalp. Ten plaques with texts that were placed along the way commemorate Mann. Another prominent guest of the Schatzalp was the author Arthur Conan Doyle .

The Alpinum Botanical Garden is located northwest of the hotel in the Guggerbach valley, just a few minutes' walk from the hotel. The Alpinum was already in the first years of the sanatorium by Dr. Edward Neumann and is open from mid-May to mid-October.

The railways above the Schatzalp were all closed in 2002. But since December 2009 skiing has been possible again on Schatzalp / Strela - the first decelerated ski area was created. A chairlift and a ski lift are back in operation. The second ski lift and the connection to the Parsenn are still closed.

The architects Herzog & de Meuron have been planning a 105 m high and 200 million Swiss franc apartment tower right next to the Schatzalp mountain hotel since around 2004 . The tower was intended to finance the modernization of the hotel and ski area. The population of Davos approved the rezoning for this project in a referendum in 1985 with 1,825 votes. However, the implementation of the plans has become questionable as a result of the second home initiative adopted in 2012 (i.e. a municipality should not have more than 20 percent second homes. ) And thus the construction project remained silent.

The Schatzalp in the film

The Schatzalp has repeatedly served as a backdrop for filming. In 2005 the sanatorium became the setting for the reality TV series Das Internat . In the summer of 2014, the film Youth - La Giovinezza (German title: Ewige Jugend ) 'by Oscar winner Paolo Sorrentino was shot there. For the film Mal de pierres , released in 2016, scenes with leading actress Marion Cotillard were recorded on the Schatzalp in 2015 , which is not, however, the setting.