Sir Arthur Ignatius Conan Doyle M.D. ( listen ? / i ) (born May 22, 1859 in Edinburgh , Scotland ; † July 7, 1930 in Crowborough , Sussex , England ) was a British doctor and writer . He published the adventures of Sherlock Holmes and his friend Dr. Watson . Also known is the character Challenger from his novel The Forgotten World , which served as a template for numerous films and a multi-part television series. 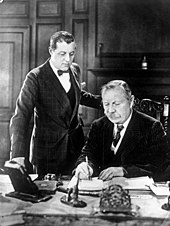 Arthur Conan Doyle was on May 22, 1859. Scottish Edinburgh born. His mother's name was Mary, b. Foley, and was Irish . The father Charles Altamont Doyle , an English , Irish-born civil servant from an aristocratic family , let him study medicine at the University of Edinburgh . Both parents were Roman Catholic. In Edinburgh he also learned from the famous Scottish surgeon Joseph Bell , whose assistant he became in 1878. He also attended the renowned Jesuit schools Stonyhurst College near Clitheroe in the English county of Lancashire and from 1875–76 Stella Matutina in Feldkirch in Austria.

In 1880 Doyle traveled to the Arctic as a ship's doctor on the whaler Hope , and a year later on the Mayumba to West Africa . From 1882 to 1890 he ran a medical practice in Southsea near Portsmouth . In his spare time he wrote his first literary works. In 1883 he wrote his first novel in Portsmouth, The Narrative of John Smith (see below), which, however, remained unfinished and unpublished and was only published in 2011 . In 1887 he published the first story of the detective Sherlock Holmes and his friend Dr. Watson : A Study in Scarlet ( dt. A Study in Scarlet ).

The deductive and criminal analytical method is characteristic of the Doyle figures. He, himself a doctor, thought of the role of Dr. Watson too. Sherlock Holmes he endowed with characteristics of his teacher at Edinburgh University, Joseph Bell. The methods of forensics described by Doyle in his novels , such as dactyloscopy , were ahead of the police methods of their time. This applies in particular to the fundamentally scientifically oriented methodology of crime investigations.

In 1890 Doyle went to London . From 1891 he was able to make a living by writing, after the first detective story A Scandal in Bohemia (Eng. A scandal in Bohemia ) had appeared in The Strand Magazine that same year .

In 1893 Conan Doyle decided to end the life of his protagonist, Holmes, as regularly writing new Holmes stories was taking too much of his time and he wanted to concentrate his writing on other works. The writer's mother, an avid reader of the stories, tried in vain to dissuade him from the project. In the story The Final Problem (dt. The last problem ) crashes Sherlock fighting with his adversary , Professor Moriarty , the Reichenbach Falls in Meiringen in Switzerland down and agreed to by Watson dead.

That same year, Doyle was master in the Masonic Lodge Phoenix No. 257 in Portsmouth.

On March 23, 1894, he crossed the Maienfelder Furgga from Davos to Arosa on skis in a daring venture , accompanied by two locals, the brothers Tobias and Johann Branger. The event was recreated a hundred years later by ORF in a television film based on Conan Doyle's article An Alpine Pass on 'Ski' , published in Strand Magazine in December 1894.

Doyle had less success with historical novels such as Rodney Stone , Sir Nigel and The White Company ; he himself considered them to be his best work. Mystical novels such as The Parasite (1894) and Mystery of the Cloomber (1895) also date from this period .

In 1899 Doyle went to South Africa to do medical service in the Second Boer War and to work as a reporter for various newspapers. For its propaganda activities in its published 1900 book The Great Boer War (dt. The Great Boer War ), he was in 1902 as a Knight Bachelor ennobled.

Around 1900 Doyle fell ill with typhus and made a trip to Norfolk . There he met Fletcher Robinson, who came from Devonshire and grew up in Dartmoor . Robinson told Doyle old legends about his homeland, including some scary stories about a ghost dog. These inspired Doyle to write a novel in which a ghost dog threatens a family. Doyle traveled to Dartmoor to capture the real atmosphere. It was there that he realized that he needed a hero in the form of a detective to investigate the mysterious processes. He decided to go back to his character Sherlock Holmes, although he had declared the series in 1893 for an end. The novel should therefore take place in the final short story before Holmes' death.

From 1906 he campaigned in several newspaper articles for George Edalji , who had been wrongly convicted of mutilating several animals.

Doyle had made the acquaintance of the British-Irish diplomat Roger Casement , whose report on the catastrophic conditions in the Congo Free State of the Belgian King Leopold II had been published in 1904. After the situation had not improved despite the transfer of the royal private colony to the Belgian state , Doyle wrote a much-noticed pamphlet on The Congo Crime , in which he named the king as the main responsible.

In the following time Conan Doyle created his second very popular character, Professor Challenger . The Forgotten World , in which it first appears, was published in 1912 and is considered his most famous novel alongside the Sherlock Holmes series. Doyle's texts published during the First World War deal with the Germany of the time in a critical manner. In October 1918, a few months before the war officially ended, his son Kingsley died of the Spanish flu. Doyle began to devote himself increasingly to science fiction in the tradition of Jules Verne as well as to spiritualism and mysticism and also went on lecture tours (inter alia to the USA and South Africa).

Among other things, he made known the so-called fairies of Cottingley , fake photos of fairies, in whose authenticity he firmly believed, filmed in 1997 in Der Elfengarten . His public controversy with the magician Harry Houdini made headlines . The friendship between Doyle and Houdini broke up because of different ideas about spiritualism - Doyle accepted various media as genuine and believed that Houdini himself had supernatural abilities, while Houdini said he never experienced a séance whose effects he could not have imitated with magic tricks.

In 1927 the last anthology was published with stories before Doyle's death - The Casebook of Sherlock Holmes (German Sherlock Holmes' Book of Cases ). On July 7, 1930 Doyle died from a heart attack in Windlesham , his estate in the territory of the town of Crowborough , Sussex . He was married twice, from 1885 to her death in 1906 to Louisa (Louise) "Touie" Hawkins and from 1907 to his death to Jean Leckie. From his first marriage came his children Kingsley and Mary, from his second the sons Denis, Adrian and daughter Jean, called "Billie". Doyle was buried under an old oak tree in the All Saints Churchyard of All Saints Church in the small town of Minstead . His grave is still there today; his wife Jean was also buried there in 1940. 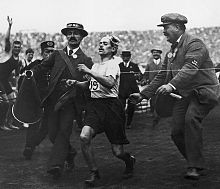 Career as an athlete

In March 1893, Doyle was the first Briton to take a day tour of cross-country skiing . In memory of this achievement, the Australian polar explorer Douglas Mawson named the Doyle Glacier in Antarctica after him.

Doyle played soccer as a goalkeeper for the amateur club Portsmouth Association Football Club. He used the pseudonym "AC Smith". He was also an avid cricketer and was featured on the first team ten times by the famous Marylebone Cricket Club (MCC) between 1899 and 1907 . He was also a very good golfer, team captain of the Crowborough Beacon Golf Club, East Sussex, in 1910. He also initiated the construction of the golf course in Davos during his stays there from 1893–1895.

Arthur Conan Doyle reported on the marathon for the Daily Mail at the London Olympics in 1908 . Dorando Pietri was the first to cross the finish line , but because the judges and doctors helped him across the finish line , the runner was disqualified . Doyle's detailed and emotional report in the Daily Mail of July 25, 1908 about the weakened Italian's finish line and a letter to the editor , published at the same time as his article , in which Doyle appealed for donations for Pietri, are the basis of one of the most famous myths of the modern Olympic Games . Doyle's great dedication led to the widespread but untrue legend that Doyle himself helped Pietri cross the finish line. Dr. Michael Bulger, who can be seen in a photo as a helper, was often mistaken for Doyle.