A football goalkeeper trying to fend off a ball

Goalkeepers have special rights over other players in most sports. In football z. B. the goalkeeper may use his hand in the penalty area . In addition, the goalkeeper usually wears special clothing and equipment that visually distinguishes him from the other players, fulfills certain protective functions (such as the goalkeeper mask and the goalkeeper rails in ice hockey ) and supports him in his special task (e.g. increased catch security and Impact absorption through special goalkeeper gloves ).

The goalkeeper's clothing is different from that of all other field players.

Iker Casillas was the first to become world goalkeeper five times in a row (2008 to 2012). 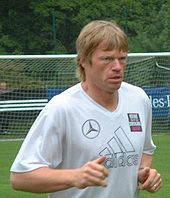 The goalkeeper is visually different in his playing attire from all other people on the field.

The goalkeeper may consciously play the ball in his own penalty area with his hand.

According to the back pass rule , the goalkeeper is not allowed to pick up a ball that has been deliberately kicked back to him by a teammate. The time after which the goalkeeper has to play a recorded ball again is a maximum of six seconds. Failure to do so will result in an indirect free kick to the opposing team at the point where the goalkeeper held the ball for more than six seconds.

For a penalty kick, the goalkeeper must keep one foot on the line until the kicker has touched the ball. He had to keep both feet on the line by summer 2019.

The rules for goalkeepers have been changed several times to speed up the game. This concerns the introduction of the back pass rule and the behavior with the penalty kick. In the past, the rule that he was not allowed to move on the penalty kick led to repeated discussions if the goalkeeper had subsequently held the ball and the referee (or his assistant) had not punished the premature movement.

The goalkeeper is the only player for whom play is always interrupted to deal with an injury until he can be used again or a substitute has been substituted on. If a goalkeeper is expelled from the field or injured so seriously that he can no longer play and the substitution quota is exhausted, a field player takes over his role. The goalkeeping rules apply to this from now on.

Up until 1871 it was considered common for the most exhausted to go into the goal, so there were always changes. Today in recreational football this is the flying goalkeeper who also plays in other positions. In professional football, this is in accordance with the rules, but not common because of the goalkeeper's specialization in his position. In contrast to the other players, goalkeepers are rarely exchanged. As a rule, regular goalkeepers wear the number 1 on their back .

Some goalkeepers went beyond simply preventing goals in their style of play. So was Petar Radenkovic as well known for often leaving his own penalty area, José Luis Chilavert from Paraguay regularly led the free kicks of his teams and also shot penalty kicks, where he scored 60 goals. Rogério Ceni , who made 1256 appearances for São Paulo FC in his career , was also an excellent free-kick and penalty taker, scoring 131 goals. In the German Bundesliga , Hans Jörg Butt was a regular penalty taker. On May 30, 2006, Colombian goalkeeper Neco Martínez scored a hit from around 90 meters in the 63rd minute of the World Cup test match Poland against Colombia: His Polish counterpart Tomasz Kuszczak left the ball, which hit the edge of the penalty area and then in Bow flew over him, fly into the net. Rein van Duijnhoven scored a similar goal when he played for Maastricht. Also René Higuita , another goalkeeper of Colombia, was considered extravagant in the way of playing. The Mexican goalkeeper Jorge Campos occasionally exchanged his self-designed goalkeeper jerseys for those of field players and played in the attack of his club and the national team. In games with a close score shortly before the end of the game, the goalkeeper of the team behind will go into the opposing penalty area as an additional striker in the final minutes of the game in set pieces. In the Bundesliga, Jens Lehmann , Frank Rost , Marwin Hitz and - in the second Bundesliga - Philipp Tschauner and Martin Männel scored goals in the final minutes. In Serie A , Massimo Taibi's goal was scored in 1999 and it remains his only goal.

After the penalty shoot-out replaced the drawing of lots in the 1970s , goalkeepers played an important role in many important games. Some teams even built their strategy on the skills of their goalkeeper; B. Argentina at the 1990 World Cup . At World Cups, most of the penalty kicks were saved by Toni Schumacher (Germany, 1982/1986) and Sergio Goycochea (Argentina, 1990). Both were able to fend off four penalties each. In the quarter-finals of the 2006 World Cup , Portugal versus England, Ricardo was the first goalkeeper to save three penalties in a penalty shoot-out.

Insecure goalkeepers who have problems catching balls are referred to in sports jargon as "fly catchers ".

The first goalkeeper who did not concede a goal in ten games at the World Cup was Peter Shilton / England (between 1982 and 1990), but he never won an EM or World Cup. Fabien Barthez set this record at the 2006 World Cup. At the 2006 World Cup, the Swiss Pascal Zuberbühler was the only World Cup goalkeeper to have been on the pitch for the entire tournament season, with the exception of a penalty shoot-out. Nadine Angerer , goalkeeper of the German women's national team, survived the 2007 Women's World Cup in China without conceding a goal. Among other things, she held a penalty in the final.

The unique role of goalkeepers means that there are a large number of players in this position who can look back on particularly long careers in both the club and the national team. Only a few other goalies from different eras are mentioned here as representative of these :

Other sports that have goalkeepers 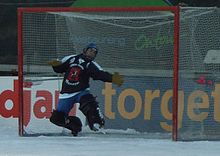 Sports with goals but without a goalkeeper

American football , basketball , netball played in Switzerland , polo , bike ball (2-a-side) and rugby are among the sports in which there are goals but no special goalkeepers.