Thierry Omeyer with a seven meter

A goalkeeper at seven meters 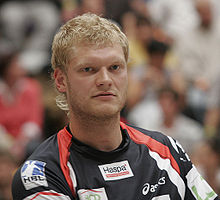 The handball goalkeeper (also known as goalkeeper , goalkeeper , goal player and especially in Switzerland goalie ) is the most defensive player on a team in handball . Its main task is to prevent the ball from getting into its own team's goal.

A handball goalkeeper must wear a shirt with a number (on the front and back), the color of which is different from that of the field players of his own team and the opposing team (including their goalkeepers). If this is not guaranteed, he must, for example, put on a partially transparent training bib for better differentiation. Most goalkeepers also wear long training pants and male goalkeepers almost without exception wear a groin guard (jockstrap). The wearing of sports shoes is required according to rule 4: 9. In contrast to soccer goalkeepers, goalkeepers do not wear goalkeeper gloves in handball . This has also been prohibited since 2016 according to rule 4.9 of the IHF . Face masks were discussed several times in the past, but are prohibited (according to rule 4: 9), as are head protection, visible piercing, necklaces, earrings, glasses without straps and similar items that may endanger the opponent.

Rules for the goalkeeper

A team must name a player on the court as goalkeeper throughout the course of the game. However, he can take the position of field player at any time after a substitution or shirt change. Likewise, a field player can take the position of goalkeeper at any time. Rule 5 The goalkeeper deals exclusively with the rules that apply to the goalkeeper. A number of special rules apply to goalkeepers, especially within their own goal area. For the purpose of defending the ball, the goalkeeper may touch the ball with all parts of his body in the goal area. The three-second rule (Rule 7: 2), the three-step rule (Rule 7: 3), the rule for tapping the ball (“twice”) (Rule 7: 4) and the multiple ball contact without ground contact of the ball (rule 7: 7). However, if he deliberately delays the passage of the ball, the referees can decide on passive play .

However, he may not leave the goal area with the ball under control after a goalkeeper-throw has been kicked off (Rule 5: 6). If he is in the goal area, he may not touch a ball lying or rolling on the ground outside the goal area (Rule 5: 7) or bring it in (Rule 5: 8). He is also not allowed to go back with the ball from the field of play into the goal area (Rule 5: 9). He must not touch a ball that is already moving towards the field of play or lying in the goal area with his lower leg or foot (Rule 5:10). If the opposing team is seven meters , he must not cross the goalkeeper's boundary line (4-meter line) or its imaginary extension on either side before the ball has left the thrower's hand (Rule 5:11).

The goalkeeper is occasionally used as the 7th field player or replaced by a field player. Usually this happens shortly before the end of a game, when the attacking team is just behind after goals. This is to increase the chances of a win or a draw.

Tasks and requirements for a handball goalkeeper

The primary task of the handball goalkeeper is to prevent the ball from crossing the goal line in full diameter by the opposing team, that is, the opposing team from scoring a goal. If the ball is held or discarded, the goalkeeper in modern speed handball has to get the ball back into play as quickly as possible. This means that your own team can score goals through counter-attacks or the so-called "second wave". Due to the fast center , opposing hits, initiated by a fast pass by the goalkeeper, can also be countered. Occasionally, goalkeepers also score goals themselves, for example by throwing the ball across the field into the goal of the opposing goalkeeper if the latter is too far in front of his own goal. The goalkeeper Johannes Bitter was able to score two goals in his 112 international matches.

Body length is a criterion for a goalkeeper, especially in the professional field. A basic rule is "the longer the better" (the late Bundesliga keeper Dieter Bartke was 2.16 m long), but physical disadvantages can often be more than compensated for by other properties such as jumping power and mobility. For example, Wieland Schmidt is 1.85 m and Henning Fritz 1.88 m. Quick reflexes , a quick grasp and the ability to anticipate are more important . Goalkeepers must be able to anticipate game situations, this is made easier by a repertoire of standard situations that they have acquired over the years. In sports science, these standard situations are also called action patterns. Basic requirements are a certain fearlessness of the thrown ball and the collision with the attacker as well as strong nerves in stressful situations.

The cause of the pain may be damage to the elbow nerve ulnar nerve . The clarification of the question is the subject of current research in order to develop suitable preventions and treatment options.

If a handball goalkeeper receives a time penalty , he has to “serve” it like any other player. As a rule, he is then replaced by another goalkeeper from the team and the team concerned plays with one field player less.
For several years it has been discussed that the goalkeeper should be forbidden to leave the throwing circle in case of counter-attacks. In the past this has resulted in some serious sports accidents.
For teams with a similar level of performance, goalkeeping performance can very quickly become a decisive factor in the game. With a quota of 25 percent or more balls held, one can generally speak of a very good goalkeeping performance. Odds of over 50 percent over more than 30 minutes of playing time are very rare in the active area.
A typical movement to ward off a ball is the so-called jumping jack .
If a player throws unhindered at the head of a goalkeeper who is not in motion, for example with a seven meter throw, the thrower is disqualified (rule 8: 5). 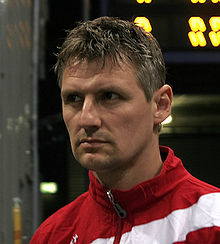 Thierry Omeyer with a jumping jack