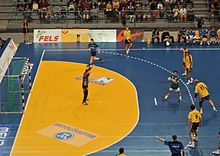 A seven-meter in handball is caused by the illegal thwarting of a clear goal opportunity. This can be a foul game or a defensive action in the 6-meter goal area . None of the other players may be within the 9-meter area during the seven-meter throw. Only goalkeepers and throwers are involved.

The seven-meter kick is initiated by the referee with a whistle . From this moment on, the thrower has three seconds to throw at the goal, although throwing deceptions are permitted. When performing the throw, at least one foot must be on the ground. Movements of the foot on the spot are allowed, but it must not touch or cross the 7-meter line. The thrower or a teammate may only touch the ball again if he has previously touched the goal (post or crossbar ) or an opposing player (goalkeeper).

Before the ball has left the thrower's hand, the goalkeeper must not stand more than four meters from his outer goal line. This limit is indicated by a 15 cm line parallel to the goal line. The seven-meter throw is repeated if the goalkeeper has crossed the 4-meter line and no hit has been scored. 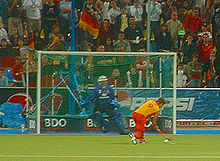 In hockey , the seven-meter kick follows an intentional violation of the rules in the shooting circle or an unintentional violation of the rules that prevented a goal. This can include foul play or playing the ball with the body. However, a penalty corner is imposed for unintentional rule violations that do not prevent a goal . Strictly speaking, field hockey is not even seven meters, as the English influences in hockey mean that the playing field was measured in yards . The so-called seven meter point is 6.45 m from the gate. In indoor hockey , the 7-meter point is identical to the indoor handball marking.

The execution of the seven-meter is released by the referee when the goalkeeper and the shooter are ready. The goalkeeper must neither leave the baseline (i.e. part of the foot must touch the line) nor irritate the shooter by moving before the shooter takes a shot. The shooter is allowed to run up, the earlier foot error has been abolished. In contrast to the penalty corner, it is not allowed to hit with the seven meter, i.e. H. the ball must without backswing the racket in motion are set (usually by a - possibly also flat running - , coming ).

According to general understanding, the most promising ball is about 1/3 goal height on the right side of the goal as seen by the shooter, since the goalkeeper cannot parry with the stick here.

Counterparts in other sports