The gymnastics club Großwallstadt 1888 e. V. (TVG) is a sports club from Großwallstadt in Lower Franconia , which became known nationwide primarily for its handball department .

In addition to the handball division, to which over 2/3 of the members belong, there are the departments of badminton , jazz dance, bowling , athletics , table tennis , gymnastics , singers and hiking.

The team of the 2010/11 season with children running in 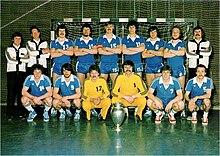 With seven German championships , four DHB cup wins and five international titles, TV Großwallstadt is one of the most successful handball clubs in Germany.

Handball has been played in Großwallstadt in Lower Franconia since 1925. In 1969, after numerous successes on a regional level, they were promoted to the indoor handball league. In addition, the club belonged to the field handball Bundesliga from 1967 to 1973 in all seven summer seasons in which it existed. In the first season of 1967 the TVG was runner-up, in the last season of 1973 Großwallstadt won the Bundesliga final in field handball and won its first national championship title.

Since the one-piece handball Bundesliga was founded in 1977, the club has played in the top German division and went down as the first German champion in the history of the handball Bundesliga. In 1980 the people of Großwallstadt achieved something historical, they won all possible titles with the German championship, the German cup, the European championship cup and the Supercup. After the club had almost dominated the action in the early years of the league - until the end of the 1980s, West German indoor handball was almost exclusively characterized by TV Großwallstadt, VfL Gummersbach and TUSEM Essen - TV Großwallstadt fell back into mediocrity due to financial difficulties. At the end of the 2012/13 season , the club was relegated to the 2nd Bundesliga after 44 years of membership in the Bundesliga. Khalid Khan was signed as the new coach for the 2013/14 season . On October 28, 2013 it was announced that Khan is no longer able to continue training the team due to mental fatigue syndrome. On November 3rd, 2013 Maik Handschke was hired as his successor, who was under contract with TUSEM Essen until November 2012. In May 2015, Großwallstadt no longer received a license for the 2nd Bundesliga. It was decided against going to the responsible sports court and was thus determined to be relegated to the third class.

In order to put the handball department on a solid economic basis, TV Grosswallstadt Handball AG , the first stock company in the handball Bundesliga, was founded in 2001 .

Bankruptcy and a fresh start

Due to bad investments in the past, the club had to struggle with financial problems for a long time. In recent years, the eligibility to play has therefore always only been granted in the supplementary performance procedure. For the 2015/16 season, TV Großwallstadt was not granted a license for the 2nd Bundesliga even after this period had expired. The reasons given for this were gaps in the budget that the examination committee did not consider to be covered. A visit to the arbitration tribunal was refrained from.

Due to this situation and the realization that the existing liabilities could no longer be reliably serviced, an application for insolvency was filed with the Aschaffenburg District Court on June 1, 2015. As a result, the players quit the club. The last game of the 2014/15 season was no longer played.

On June 26, 2015, TV Großwallstadt GmbH was founded, with which the association dares a fresh start. With its own young players, as well as successful and experienced players, such as the former professional Jens Tiedtke , a team is now to be built that takes part in the game and aims for promotion to the Bundesliga.

On July 22nd, 2015 it was announced that Maik Handschke will also remain coach of the Großwallstadt team in the 3rd division. Handschke received a one-year contract, but was fired at the beginning of September 2015 and replaced by the former TVG player Heiko Karrer .

At the beginning of the 2015/16 season, TV Großwallstadt returned to its former home ground, the Untermainhalle in Elsenfeld (capacity 2,500 spectators). The previous venue, the fan frankenstolz arena in Aschaffenburg, which has been in use since the 2010/11 season, will not be used for financial reasons.

The mascot of the handball national league team is Leo Löwenherz. On June 1, 2006, it was the total winner of the “First Official Mascot World Cup” on TV .

Accumulation of the players in a Bundesliga game

In addition to regular benefit games, the association started the TVG goes Schule project in June 2006 , in which the Bundesliga team visits schools in the area for joint training. We also sponsored a kindergarten in Klingenberg - Trennfurt , whereby the children should be physically supported through joint training. The fans are also involved in the financing of charitable projects through collection campaigns and the sale of fan products.

Squad of TV Großwallstadt in the 2018/19 season