The gymnastics club Bittenfeld 1898 e. V. , TV Bittenfeld for short , is a sports club from the Waiblingen district of Bittenfeld . Known mainly the Handball -Mannschaft of the men from the 2006/07 season to the 2014/15 season in the 2. Handball-Bundesliga played and since the season 2015/16 under the name TVB 1898 Stuttgart in the German Handball League is represented. The team plays the majority of its home games in the Scharrena Stuttgart , some of the home games also take place in the Porsche-Arena in Stuttgart due to capacity reasons .

After the Second World War, the association was re-established on November 18, 1945 and recognized by the American military government on September 9, 1946. In the years 1947 to 1949 the first team under coach Helmut Luithardt reached the finals for the Württemberg championship in field handball. In 1960/61, the first team under coach Horst Jung rose to the highest divisions in field handball and indoor handball.

In the meantime, Jürgen Krause was the coach of the indoor handball team in the major league. This climbed over the Oberliga Baden-Württemberg (2003) - in the meantime Günter Schweikardt had taken over the coaching position again - and the Regionalliga (2004) up to the 2nd Handball Bundesliga South (2006) and completed five seasons there until 2011. During the 2007/08 season , the previous assistant coach Henning Fröschle took over the post of head coach from Günter Schweikardt, who switched to the post of sporting director . In December 2008 Fröschle resigned from his position as a coach. Jens Baumbach followed him on an interim basis until Schweikardt returned to the post of head coach. He was now supported by Baumbach and Klaus Hüppchen as co-trainers.

In the 2010/11 DHB Cup , the club won against SG Leutershausen in the first round, against TSG Groß-Bieberau in the second round and lost to the Rhein-Neckar Löwen in the third round . At the end of the 2010/11 season , TV Bittenfeld took fourth place in the southern season of the 2nd Bundesliga. This authorized the team to play in the newly founded single-track 2nd handball Bundesliga .

On August 27, 2011, the first team of TV Bittenfeld played the first competitive game of the 2011/12 season in the Bittenfeld community hall . The team defeated the second division HC Erlangen in the first main round of the DHB Cup with 28:26 (16:10). In the 2nd main round of the DHB Cup, the team competed with third division TUSPO Obernburg , won 36:32 (18:17) and qualified for the next round. There the team from the Rems-Murr-Kreis met SV Beckdorf , a third division club from the northern season. On October 25, 2011, the TV Bittenfeld defeated the lower class opponent with 42:32 (23:16). Thus, for the first time in the club's history, the TVB made it into the round of 16 of the DHB Cup and got a third division team drawn there with the EHV Aue . Since Aue qualified for the DHB Cup as a second division team, the home rights between the two teams were not exchanged. The Bittenfelder lost the game on December 6, 2011 in their own hall with 27:29 (10:15) and missed the first-time entry into a DHB Cup quarter-finals.

In the 2012/13 season , the club won the DHB Cup in the first round over TuS Fürstenfeldbruck , followed by the end against TV Hüttenberg in the second round . In March 2013 Günter Schweikardt resigned as a trainer. As an interim solution, he was followed by his son Jürgen and the previous assistant coach Heiko Burmeister until the end of the season .

The previous interim coach Jürgen Schweikardt looked after the team as head coach from the 2013/14 season . In the DHB-Pokal 2013/14 the club defeated the Bendorf gymnastics club in the first round, the TV Emsdetten in the second round and was defeated by Frisch Auf Göppingen in the round of 16 .

In the DHB-Pokal 2014/15 the first round was eliminated against SC DHfK Leipzig Handball . At the end of the 2014/15 season , TV Bittenfeld took 3rd place and was promoted to the handball Bundesliga for the first time .

The Bundesliga team has been playing under the name TVB 1898 Stuttgart since the 2015/16 season . Jürgen Schweikardt's successor as coach was Thomas König . In the 2015/16 DHB Cup , the club competed in the first round, which was held as a tournament for the first time, against TSG Friesenheim , SV Salamander Kornwestheim and the Rhein-Neckar Löwen . The defeat in the first game against the Rhein-Neckar Löwen already meant the tournament and thus also the elimination from the DHB-Pokal. At the end of the 2015/16 season, the club secured 15th place in the handball Bundesliga. Thomas König was on leave after the end of the season.

At the beginning of the 2016/17 season , Markus Baur became the coach of the Bundesliga team. In the DHB Cup 2016/17 , the TVB competed in the first round, which was held as a tournament, against MSG Groß-Bieberau / Modau , SG BBM Bietigheim and Leichlinger TV . After a win against Groß-Bieberau / Modau, the TVB retired from the DHB Cup with a defeat against Bietigheim. In the Bundesliga, the club secured 14th place on the last match day and thus relegation.

In the 2017/18 season , the TVB reached the quarter-finals of the DHB Cup for the first time in the club's history . After two wins in the first round against HSV Bad Blankenburg and EHV Aue , the team defeated TBV Lemgo in the round of 16 , but was eliminated in the quarter-finals against HSG Wetzlar . After ten games without a point win, the relegation-threatened club announced on February 18, 2018 that it had parted ways with coach Markus Baur with immediate effect. Managing director Jürgen Schweikardt took over the coaching position in personal union. At the end of the season, the TVB took 14th place in the Bundesliga and announced that Jürgen Schweikardt will remain coach with a three-year contract.

For the 2018/19 season , Sven Franzen took over the finance, sales and event divisions as another managing director of the TVB. Jürgen Schweikardt continues to be responsible for the areas of sport, communication and organization. In the DHB Cup , the club was eliminated in the first round, which was held as a tournament, in the first game against DJK Rimpar . At the end of the season, the TVB took 15th place in the Bundesliga.

In the 2019/20 season, the TVB prevailed against HSC 2000 Coburg and TSB Heilbronn-Horkheim in the first round, which was held as a tournament . In the second round, the TVB defeated HC Erlangen with 30:26 at home , before losing the home game against THW Kiel with 34:35 in the quarter-finals .

The first game in the Scharrena in Stuttgart took place on May 4, 2012 against HSG Nordhorn-Lingen . At the beginning of the 2012/13 season, TV Bittenfeld moved its home ground from the community hall in Bittenfeld to the Scharrena. Individual games take place in the Porsche Arena . 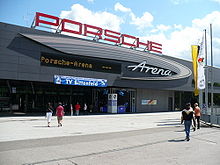 Home game in the Porsche Arena 2007

The main sponsor of the Bundesliga team has been Kärcher from nearby Winnenden since 2012 . Kempa is the official supplier of the 1st team .

The second team of TV Bittenfeld played in the national league until the 2010/11 season. There the team took first place and played in the Württembergliga in the meantime. In the 2017/18 season, the 2nd team qualified as their champions for the major league . The team is trained by Thomas Randi, supported by Roland Wissmann and Michael Rill.

The A-Jugend of the TVB has been playing in the A-Jugend-Bundesliga since the 2016/17 season .

Clubs in the youth Bundesliga handball 2019/20