The Handball Sport Verein Hamburg eV is a sports club from Hamburg .

The association was founded in 1999 as handball club Luebeck founded and took over the Bundesliga license of VfL Bad Schwartau , with whom he and 2002 syndicate SG VfL Bad Schwartau Lübeck made. In 2002 this was dissolved and the association moved to Hamburg. The Bundesliga team there was initially operated by Omni Sport GmbH & Co. KG , in which Winfried Klimek held a 90 percent stake. Klimek was arrested in December 2004 and sentenced to five years in prison in August 2005 for fraud and breach of trust. The Omni Sport GmbH & Co. KG then had to file for bankruptcy and was replaced in summer 2005 by the HSV Handball Betriebsgesellschaft mbH & Co. KG .

After Klimek left, Andreas Rudolph became the most important partner. He held a 74.9 percent stake in HSV Handball Betriebsgesellschaft mbH & Co. KG and was president of the club from 2005 to 2011 and from 2013 to 2014. According to his own statements, he invested 50 million euros by December 2015. On May 8, 2014, he announced his resignation from the presidency, which threatened immediate bankruptcy due to the lack of financial support. On May 15, 2014, the club did not receive a license from the Handball Bundesliga (HBL) for the 2014/15 season and lodged an appeal against this decision, which was rejected by the HBL on June 3, 2014. On June 11, 2014 the Presidium decided to have this decision examined by the arbitral tribunal; In addition, the license for the 3rd division was applied for as a precaution . On June 25, 2014, the arbitral tribunal upheld the Hamburg's objection and granted the club a license for the coming season, subject to certain conditions. These conditions were met on July 1, 2014.

After the financial situation could not be improved in the following year and a half, the managing director Christian Fitzek filed for insolvency for HSV Handball Betriebsgesellschaft mbH & Co. KG at the Hamburg district court on December 16, 2015 . The bankruptcy proceedings were opened on January 15, 2016. On January 20, 2016, the HBL licensing commission subsequently revoked the club's license for the 2015/16 season. When the license was granted, Andreas Rudolph made a declaration of commitment to secure liquidity gaps in the amount of 2.5 million euros, but restricted this in an additional agreement. This agreement was withheld from the licensing commission. The club was not allowed to apply for a license to play in the 1st and 2nd Bundesliga for the 2016/17 season due to the license withdrawal. On January 25, 2016, the insolvency administrator withdrew the team from playing in the handball Bundesliga with immediate effect.

Martin Schwalb became managing director and president after the 2010/11 season, with Per Carlén as coach . On December 29, 2011, the separation from Carlén was announced. Temporarily, the U23 and previous assistant coach Jens Häusler took over the coaching position. On March 16, 2012, Martin Schwalb returned to HSV-Bank as a coach. In the 2012/13 season, HSV achieved their greatest success to date by winning the Champions League. In the final in Cologne he defeated FC Barcelona with 30:29 after extra time. In the 2013/14 season, the renewed qualification for the Champions League was missed with a fourth place in the Bundesliga and at the end of the season Martin Schwalb was replaced by Christian Gaudin . Gaudin was released in December 2014 after four defeats in five games. Jens Häusler took over the training of the first team until the end of the season and reached the final of the EHF European Cup with it . The final against the Füchse Berlin was lost at 27:30. In the Bundesliga, the team finished ninth, which meant that they missed the qualification for the European Cup. For the 2015/16 season Michael Biegler took over the coaching office, who announced in December 2015 that he would resign from the coaching office due to the uncertain situation after the bankruptcy proceedings at the end of the 2015/16 season. With the withdrawal from gaming operations, Biegler's involvement ended prematurely in January 2016.

New start in the 3rd division

The second team became champions of the Oberliga Hamburg - Schleswig-Holstein in the 2015/16 season and was the first team to compete in the third division in the 2016/17 season . After the bankruptcy of the operating company, the team was operated directly by the Handball Sport Verein Hamburg eV. Marc Evermann was elected as the new president of the association and Martin Schwalb as vice-president.

In the 2016/17 season , the team took third place in the table and in the 2017/18 season they rose to the top of the table in the 2nd Bundesliga . For the 2018/19 season, the first team's game operations were outsourced to HSM Handball Sport Management und Marketing GmbH .

The following former players were part of the Bundesliga squad for at least two years: 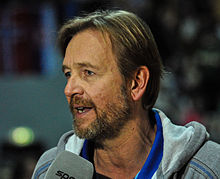 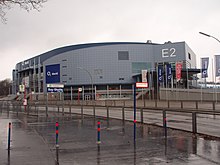 The 2007 home game in the European Cup Winners' Cup against HC Portovik Juschni (Ukraine) was a special case. On February 25, the game was played in the Lübeck Hansehalle (home ground of VfL Bad Schwartau ), as both the Color Line Arena and the Alsterdorfer Sports hall were already occupied.

The away game against the actually in Mannheim -based Rhein-Neckar Löwen on the fourth day of the season 2014/15 was part of a day of handball on 6 September 2014 in the Commerzbank Arena in Frankfurt held. 44,189 spectators watched this game, which set a new world record. The previous record was set in May 2011 when 36,651 visitors at Brøndby Stadium in Brøndby saw the Danish championship final between AG København and Bjerringbro-Silkeborg . At the home game against DHK Flensborg in the Barclaycard Arena on December 26, 2016, another record, the most third division spectators, was set when 8,555 spectators came. Its own world record was beaten again on December 26, 2017, when 9,964 spectators watched the third division home game against VfL Fredenbeck in the Barclaycard Arena.

Clubs in the youth Bundesliga handball 2019/20