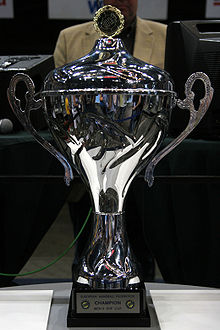 The EHF-Pokal , also known as EHF-Cup , is a European cup competition for handball club teams organized annually by the European Handball Federation (EHF) . It offers handball clubs from smaller countries and clubs that have not qualified for the EHF Champions League the opportunity to participate in an international competition. The EHF-Pokal is thus behind the Champions League and before the EHF Challenge Cup .

The forerunner of today's competition was introduced in 1982 for both men's and women's teams by the International Handball Federation (IHF) under the name IHF-Pokal . In 1993, the European Handball Federation took over the organization of the competition, which has been called the EHF Cup since then . In the 2012/13 (men) and 2016/17 (women) seasons, the competition was combined with the European Cup Winners' Cup . In 2020, the EHF European League was introduced as the second performance level.

Since the merger with the European Cup Winners' Cup in the 2012/13 season, the men have initially played three qualifying rounds in the knockout system with one leg and one leg per round, with stronger teams being added in each round due to their classification . The round of the last 16 teams will be held in a group stage, with the top two in each of the four groups qualifying for the quarter-finals. If the host of the final round is also among them, this is automatically set for the semi-finals; the worst runner-up in the group is eliminated and the quarter-finals consist of three matches. The semi-finals, the final and the game for third place will be played as part of a final four tournament. In 2013 and 2016 it took place in Nantes , 2014 and 2015 in Berlin , 2017 in Göppingen , 2018 in Magdeburg and 2019 in Kiel .

There have also been three qualifying rounds in the knockout system for women since the 2016/17 season, followed by a group stage with four groups of four. The first two in the group qualify for the quarter-finals, from which the knockout system is played again.

Until 2012 and 2016, all game rounds were played in the knockout system. The finals were also played back and forth.

In the event of a tie after both games, the higher number of goals scored in the away game decides in knockout games. If this is also the same, a seven-meter throw is played after the second leg.

Which placement in a certain national league is necessary for qualification for the EHF Cup depends on several factors. On the one hand, the number of starting places for the EHF Champions League is different depending on the league; starting with the national champion, this number results in the minimum placement for participation in this competition. A certain number of the teams placed below qualify for the EHF Cup.