The following important information is missing from this article or section:
Introduction contains references to other sports, but the article only deals with the football club, in particular, titles and achievements only refer to football
Help Wikipedia by researching and pasting it .

Fradis fan block at a home game in November 2019 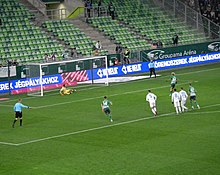 Ferencváros Budapest (officially: Ferencvárosi Torna Club ; German  gymnastics club Franzstadt ) is a Hungarian sports club from the capital Budapest . Home and namesake of the association is the southeastern IX. District Ferencváros ( German  Franz City ), which according to the Austrian Emperor I Franz is named. Founded in 1899, the colors of the club are green and white.

The football division of the FTC, founded in 1900, looks back on a history as the most successful club in Hungary. She is the country's record champion and cup winner with 30 and 23 titles respectively and also represented Hungary at European level . The team, often called Fradi by the fans , played continuously in the first Hungarian football league from 1901 until relegation in 2006 . They rose again in 2009. There is a very big rivalry with Újpest Budapest and the derby is considered the biggest in the country.

History of the club

The Ferencvárosi Torna Club was founded on May 3rd, 1899 . In the club's coat of arms, the three E stand for Erkölcs, Erő, Egyetértés ("Moral, Strength, Concord"). The club colors were green and white from the start , they were "borrowed" from the Hungarian national flag. The five green and four white stripes represent the IX. District. The football department has existed since December 3, 1900 . One of the first teachers for the team was the team from Oxford in 1902 , with 0:16 the biggest defeat to date. In 1926 the football department split off as Ferencvárosi Football Club and became independent, but returned to the parent club FTC in 1944. In the 1931/32 championship season, the FTC won all 22 games. This achievement is unique in Hungary and also rare worldwide. In the years of Stalinism in Hungary, the FTC did not exist under this name because the popularity of the association of party and state leadership was displeased - between 1950 and 1956 the association was called ÉDOSZ SE .

At the international level turned Ferencváros on the way to the final of the 1964-65 Inter-Cities Fairs Cup , among others, Roma , Athletic Bilbao and Manchester United out. In the final, which took place in Turin , Budapest triumphed 1-0 with a goal from Máté Fenyvesi in the 74th minute against Juventus Turin , thus bringing the only trophy of modern European cup competitions to Hungary. After the club had already won major European tournaments in the first half of the 20th century, Ferencváros Budapest was the first (and until 2009 only) team from Hungary to qualify for the group stage of the Champions League .

In recent years there have been numerous scandals surrounding the FTC that have cost a lot of money and have put the fans to the test. But also violent fans of the club made inglorious headlines.

Three days before the start of the 2006/07 season it was decided by the Hungarian Association that Ferencváros will be excluded from the championship due to financial irregularities and must compete in the second division in the 2006/07 season. Since the club was founded in 1900, it was the club's first descent. The club had not received the license due to financial problems, and salaries for various coaches and former presidents were still outstanding. The immediate return to the first division failed on the last day of the game.

In 2007 the club renamed its venue, the Üllői úti Stadium, after one of its greatest heroes, the Albert Flórián Stadium. In March 2013, the demolition of the 40-year-old venue began with 18,100 seats to make room for a new stadium with 22,600 seats and 29 VIP - boxes to create. In July 2014, shortly before completion, the new home was given the sponsor name Groupama Aréna . During the renovation, the Ferencváros team was based in the Puskás Ferenc Stadium .

In February 2008, the football division of the FTC was bought by the owner of Sheffield United .

After twelve years, in the 2015/2016 season, Ferencváros again won the Hungarian championship and the 29th title.

The term “Ferencváros Budapest”, which is often used outside of Hungary, is not in use in Hungary itself. The short form FTC is widespread there , and Fradi (often lovingly in the diminutive form "Fradika") is used even more frequently as the call form . There is also the name Zöld-Fehérek ("green-white"). The FTC footballers are also known as Zöld sasok ("Green Eagles").

In the long history of the association there have been repeated changes of name:

Clubs in the Hungarian Nemzeti Bajnokság 2020/21