The title of this article is ambiguous. For further meanings see VIP . 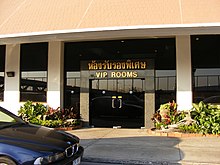 Very Important Person (German: "very important person", abbreviated VIP [ viːaɪˈpiː ] or VIP [ vɪp ], plural VIPs or VIPs or VIPs or VIPs) is a person who is given special privileges or importance due to their social status .

Examples of VIPs are celebrities , heads of state and government , important employers , high rollers , politicians , high-ranking officers, high net worth individuals, or other notable people who receive special treatment. In today's parlance, the special treatment in the service sector is often referred to as VIP service .

The term "VIP", which appeared in the field of aviation, arose among Russian emigrants in the 1930s . For the most part it was aristocrats who had partly lost their former high status during their life in emigration, in France and England. In 1927 flight tickets for the “ Paris - London ” line were advertised with “ wiesima imenitaja persona ” (Eng. Very eminent person ) in the Paris newspaper of the Russian diaspora . In a certain sense, this advertising step was successful and the term “VIP” has spread among Russian-speaking emigrants.

Preferential treatment, which is only granted for additional payment regardless of the person, is often offered under the name VIP service. Luxurious designs of objects are highlighted by advertising as VIP models. VIP shopping is a marketing tool used by retailers to address special customers.

In the aviation industry, business travel aircraft with VIP equipment and VIP flight attendants are marketed. In the case of an aircraft with an interior design that is particularly spacious and comfortable, the VVIP model (“very, very important person”) is also used.

In The Beckoning Lady , a crime novel by Margery Allingham , published in 1955, a man who has earned his money and his position on the black market is referred to as a "palindromic VIP". The palindrome is PIV, with an “s” in front of it results in “spiv”, the English slang expression for a slider.

In the song "VIPIMP" by the rapper Kollegah , an addition is addressed to the usual VIP, which means pimp in German .