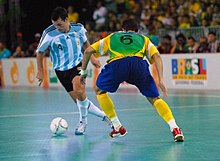 Futsal is the version of indoor football recognized by the world football association FIFA . The name is derived from the Portuguese term futebol de salão and the Spanish fútbol sala ('indoor football'). "Futsal" is currently relatively little known in German-speaking countries and is often equated with "indoor soccer"; but this is only the generic term for all forms of indoor soccer , while futsal is an internationally recognized variant.

Futsal has its origins in South America. In 1930, the Uruguayan sports teacher Juan Carlos Ceriani set himself the goal of developing an age-appropriate form of football for children. Children of different ages and regardless of their individual technical abilities should be able to play and have fun together. As early as 1942, the South American Sports Teachers Association recommended futsal for school sport.

In 1952 the first official institution, the league " Futebol de Salão ", was founded in São Paulo . In 1989, Futsal was adopted by FIFA as an additional competition and as an official international indoor soccer variant. In November 2012, the seventh Futsal World Cup was held in Thailand .

Futsal is particularly widespread in South America, and Southern and Eastern Europe. Spain has its own professional league with 16 teams, the División de Honor . In European club futsal, a national championship, the UEFA Futsal Cup, has been held by UEFA since the 2001/02 season . This was won eight times by Spanish teams by 2017, followed by three successes by Russian teams.

Many Brazilian, Argentine and southern European soccer stars such as B. Pelé , Ronaldo , Cristiano Ronaldo , Messi , Xavi and Ronaldinho started their careers with futsal.

Futsal differs from other types of indoor football mainly in that the playing field is delimited by lines (handball field) and not by boards. It is generally played with five players on handball goals with a reduced-jump ball that has a circumference of at least 62 and a maximum of 64 cm (football 68 to 70 cm). The ball has relatively little pressure (0.6 to 0.9 bar overpressure compared to 0.6 to 1.1 bar for standard size 5 football). In addition, there is the requirement that in futsal the ball must bounce no less than 50 and no more than 65 cm from a height of 2 m after the first impact. In international competitions, the playing field measures 38–42 m × 20–25 m.

Changes can be made unlimited and on the fly within the team's own transition area, the throw-in is replaced by the kick-in, the playing time is twice 20 minutes. The penalty kick is taken from six meters away. Fouls are punished restrictively. Futsal is by no means disembodied, as it is often incorrectly described. The physical contact in one-on-one matches is as intense as in football. Experience has shown that players hold back by sanctioning with a direct free kick (accumulated foul). The team fouls are counted (similar to basketball ), but from the fifth team foul (each half) for each further foul there is a direct free kick without a wall, which can be moved to the ten-meter point. After a red card, the player concerned may be replaced by another player after two minutes have elapsed or after the opposing team has scored a goal. In addition, a stricter back pass rule applies in futsal: The goalkeeper may only touch the ball once and control it for a maximum of four seconds (this includes the throw). Thereafter, he may only touch the ball again if an opponent has had contact with the ball in the meantime or if the goalkeeper is in the opposing half. Similar to handball, the goalkeeper can be replaced by another field player. The return pass rule must still be observed. Each team can be given a one-minute time-out once per half, provided that they are in possession of the ball when the game is restarted.

In addition, futsal differs from classic indoor football through the "four-second rule". For balls at rest (as well as control of the ball by the goalkeeper with his hand or foot in his own half of the field), only four seconds are available for execution. If the allowed time is exceeded, possession of the ball changes to the opposing team. The time is indicated by the referee, who clearly counts the elapse of the four seconds with his fingers on the upward stretched arm.

Futsal games or tournaments are led by 2 to 4 referees, the first, second, third and fourth referee.

During the game, the first referee is on the sideline of the field on the side of the game or tournament committee. Its task is to enforce the futsal rules, to indicate the continuation of play and to impose disciplinary penalties. If the second referee makes a wrong decision, he can overrule him.

The second referee is on the sideline opposite the first referee during the game. Like the first referee, his / her task is to enforce the futsal rules, to notify the continuation of play and to impose disciplinary penalties.

In principle, signals displayed by one of the first two referees are taken over by the other of the two. This is to help the players not have to concentrate on just one referee. During the game, one of the first two referees is always behind the game, the other in front, so that the game always takes place between the two. The positions in front of or behind the game change in the game by kick-in, corner kick or throw. This also makes the game faster and more dynamic for the referees.

The third referee is on the side of the game or tournament management between the two transition areas of the teams. Its task is to supervise the exchange benches and to ensure that the exchange processes are carried out correctly.

The fourth referee is located directly at the game or tournament management. He takes on the task of timing and counts accumulated fouls. He can also be replaced by the tournament or game management.

The sport is largely unknown in German-speaking countries; For a long time it was only run privately. A first important futsal event in Germany was the Futcon Springtime Cup , which was held three times from 2003 to 2005. The UFC Münster won once and the 1. MSC Strandkaiser Krefeld won twice .

The DFB Futsal Cup took place for the first time in April 2006 . The first winner of the DFB Futsal Cup was the UFC Münster , who defeated SVG Göttingen 07 3-1 after shooting from six meters. There is no uniform qualification mode for the tournament. In North Rhine-Westphalia , Hesse , Baden, Brandenburg, Berlin and Hamburg, the respective association champions who are ultimately qualified for the DFB Futsal Cup are determined in league modes. An official German futsal championship will be played for the first time from the 2015 season.

The record champions are the Hamburg Panthers with four titles. The UFC Münster and SD Croatia Berlin were each successful twice .

An official national futsal team was only founded by the DFB in Germany in early 2016. Previously, between 2010 and 2012, selected teams under the name DFB All-Stars played against other national futsal teams as part of the DFB Futsal Cup . In 2010 they lost 4-0 to Poland, in 2011 they lost 1:11 to Croatia and in 2012 they drew 4-4 against Denmark. In March 2015, the DFB held the first screening courses for the formation of a national team in Kamen-Kaiserau and Grünberg. On December 4, 2015, the DFB announced the establishment of a DFB national futsal team and stated that it was already participating in qualifying for the Futsal European Championship 2018 . The squad was put together in various viewing courses. After the final course from March 13 to 15, 2016 at the Hennef sports school, the first squad of the German national futsal team was named in April 2016, with whom the first international matches were played on October 30 and November 1, 2016. The English national futsal team was defeated 5: 3. The 16-strong squad took part in a joint training course with Georgia in Tbilisi in April 2016. Georgia won the two training games during the training camp 5-0 and 4-0. The European Championship finals took place in Ljubljana ( Slovenia ) in 2018 without German participation .

From January 23 to 26, 2014, the first nationwide futsal national selection tournament was held in the Wedau sports school ( Duisburg ). For the first time, all 21 football associations presented a futsal selection, which was the first time that the tournament gave a general overview of the German futsal landscape. The winner was Hamburg, ahead of Schleswig-Holstein and Württemberg. Hamburg also won the second state selection tournament from January 15 to 18, 2015 in Duisburg. The third edition of this tournament took place from January 15 to 17, 2016 again in Duisburg. This time, Saxony won the title.

From 2021 there will be a futsal Bundesliga for the first time.

Futsal is becoming increasingly popular in Austria. In the past few years, the Austrian champions were initially played out on the basis of individual tournaments. Later there were regional eliminations, also with a final tournament. Since the 2006/07 season there has been an Austrian futsal Bundesliga, the Murexin Bundesliga . Up until the 2016/17 season, the championship games were played in mini-tournaments. This means that the individual championship matches were brought together at one venue, so that each team played (mostly) two games per game day. In this mode, 2 × 20 minutes of gross playing time and the last five minutes of net playing time were played. From the 2017/18 season, the 1st and 2nd ÖFB Futsal League and the newly founded KFV Futsal League were switched to single games with the internationally usual playing time of 2 × 20 minutes net playing time.

The Austrian champions are entitled to qualify for the UEFA Futsal Cup. The Austrian cup winner ( tipp3-Futsal Cup ) plays at the UEFA Recopa Cup. The reigning champion is Stella Rossa tipp3. In addition to the championship and cup, there is also the Futsal Supercup (champions against cup winners) and the Futsal League Cup (between champions, runners-up, cup winners and champions of the 2nd ÖFB Futsal League). However, currently only the championship is an official competition of the ÖFB.

The Austrian futsal competitions at a glance

Since the 2016 season, futsal has not only been played over the winter months in Austria for the first time. The new competition of the ÖFB should represent the pioneer for a year-round championship as the official state championship. In the first year (2016) it will only be played until the end of May. In the ÖFB Futsal Challenge, only regular futsal club players are allowed to play and the playing time is 2 × 20 minutes net in the form of individual games instead of the mini-tournaments in the current championship.

On April 13, 2018, following a unanimous decision by the ÖFB Presidium, it was decided to set up a futsal national team.

In Switzerland, an official championship was held for the first time in the 2006/07 season . Even if futsal is more of a marginal sport, it is enjoying increasing popularity.