UEFA was founded in Basel on June 15, 1954, following discussions between associations from France , Belgium and Italy . According to the founding protocol, 25 out of 31 associations from Europe that were members of FIFA were present and 2 others ( Wales and Romania ) were represented. By the 1st UEFA Congress (from March 2, 1955 in Vienna ) the others had also joined, and Turkey was also to be admitted there.

UEFA was based in Paris until it moved to Bern in 1959 . The administrative headquarters have been in Nyon , Switzerland, since 1995 .

The office of President was vacant from May 9 to September 14, 2016; the functions of President were exercised by Ángel María Villar as the highest-ranking Vice -President in accordance with the UEFA Statutes ; However, he was expressly not regarded as interim president by UEFA. The elected President Michel Platini resigned on May 9, 2016, after he was no longer allowed to exercise his office since October 8, 2015. Platini was elected UEFA President for the first time on January 26, 2007 with 27 votes to 23 (with 2 invalid) against incumbent President Lennart Johansson; Johansson is the first UEFA president to be voted out of office. In 2011 and 2015, Platini was confirmed in office.

On September 14, 2016, Aleksander Čeferin was elected as the new President of UEFA and confirmed in office on February 7, 2019 for a further four years.

The UEFA President is also automatically Vice-President of FIFA .

The UEFA General Secretary (also known as the CEO , from 1999 to 2007 he was the General Manager) is responsible for the day-to-day running of the business. The general secretary and the president of UEFA are supported in their work by the administration. The administration consists of the four areas of competitions, national associations, finance and marketing.

Head of the General Secretariat

The Executive Committee is UEFA's supervisory body. It consists of 17 members, the President and 16 other members, half of whom are elected every two years. The term of office of a member is therefore four years. Four vice-presidents and a treasurer are elected from the executive committee. 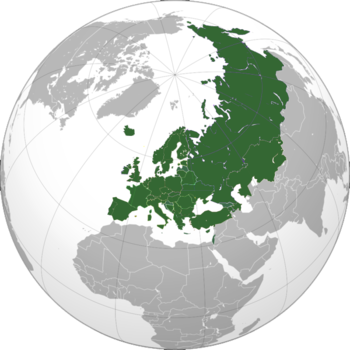 Territory of the UEFA member associations

The TEAM Marketing AG in Lucerne is the official marketer and sold the broadcasting rights for all UEFA events to the respective media.

The media services UEFA are responsible for supporting the media. In addition, they produce all images from the stadiums and select their own images using a rough cut . At the 2016 European Championship , ARD and ZDF lodged a complaint with UEFA because the UEFA image control did not show pictures of a speedster and rioting during a game.

UEFA has worked with three official languages ​​since its inception: English , French and German .

The UEFA currently has 55 national associations. The youngest member is Kosovo, whose association was recognized as a full member on May 3, 2016.

* Member country is wholly or largely in Asia .
** As Soviet Union
*** As Yugoslavia
**** As Czechoslovakia

Of the 47 states in Europe, Monaco and Vatican City are not members of UEFA. Faroe Islands , Gibraltar and Kosovo are not independent states or not generally recognized, but represent national teams. The United Kingdom does not have its own team as, for historical reasons, its parts of England , Northern Ireland , Scotland and Wales each have their own national teams. With the addition of Gibraltar, the UK and overseas leagues now have 8 spots in the UEFA Champions League and 13 spots in the UEFA Europa League .

In 1992, the Yugoslav association Fudbalski savez Jugoslavije was excluded from UEFA competitions as a result of the Yugoslav wars and the UN sanctions imposed as a result . As a result, the athletically qualified team of Yugoslavia could not take part in the European Championship finals in 1992 . For them moved up the selection of Denmark , which should win the European Championship. In the 1995/96 season , Red Star Belgrade was the first Yugoslav club to take part in the UEFA Cup ; the senior national team of Yugoslavia started again in 1996 in qualifying for the 1998 World Cup .

On April 1, 2011, membership of the Bosnian-Herzegovinian Football Association in both organizations was suspended because it did not meet the membership requirements. The national team and all clubs of Bosnia and Herzegovina were therefore excluded from the international competitions of UEFA and FIFA until further notice . The suspension was lifted with immediate effect on May 28, 2011 (UEFA) and May 30, 2011 (FIFA).

The Saarland ( SFB ) was an independent member until 1956 and then returned to the DFB ( 1. FC Saarbrücken took part in the first European Cup for Saarland in 1955/56 ).

The DFV of the German Democratic Republic was a member of UEFA from 1954 until its dissolution on November 20, 1990. Even before reunification, the GDR national team withdrew from all UEFA and FIFA events. The last game of a GDR national team took place on September 12, 1990 in Brussels. Host Belgium lost 2-0. For the last time, clubs qualified for the UEFA Cup from the GDR in 1991/92 , according to the five-year rating of 1989/90.

Since Czechoslovakia ( Československý fotbalový svaz ) split up in the course of the reforms of the Eastern bloc at the turn of the year 1992/93 in the Czech Republic and Slovakia , there is no longer a joint national team . The two new states have had their own associations since 1994. The Czechoslovak team started the qualifying round for the '94 World Cup in 1992 , the last games of the unsuccessful qualification were played in 1993 as a selection of the Czechs and Slovaks .

From 1954, the Federazija Futbola SSSR was a member of UEFA for the Soviet Union . The Soviet national team won the European Football Championship in 1960 and was twice Olympic champion ( 1956 and 1988 ). With the dissolution of the Soviet Union at the end of 1991, the membership of the Federazija Futbola SSSR in UEFA and FIFA ended; Most of the member associations of the successor states of the Soviet Union joined UEFA in their place ( the associations of Kyrgyzstan , Tajikistan , Turkmenistan and Uzbekistan are not members of UEFA, but of the Asian confederation AFC ; the association of Kazakhstan was initially a member of the AFC and switched to UEFA in 2002) . In the final round of the European Football Championship in 1992 , the former Soviet national team took part as the CIS .

Greenland ( team of Kalaallit Arsaattartut Kattuffiat ) is keen to become a member of UEFA. So far, applications have failed because there is no natural grass pitch on Greenland. However, in 2006 the passage that required the existence of a natural grass pitch was deleted.

However, the statutes expressly provide for exceptions. Article 5 (2) allows a UN- recognized state outside Europe to join UEFA if it is not already a member of another continental association. This is how Israel achieved its admission to UEFA, and the Asian successor states of the Soviet Union also belong to UEFA. For the associations of Scotland, England, Northern Ireland, Wales, Gibraltar and the Faroe Islands, Article 5 has been repealed (Article 69 (1)). The UEFA Congress has the option of making further exceptions if a request to this effect is supported by at least two thirds of the member associations.

The Kurdish national football association ( Kurdish football team ) has expressed its interest in joining UEFA, but has little prospect of success: On the one hand, the Autonomous Region of Kurdistan has not yet been recognized as a nation by the UN, and on the other hand, the national territory is not in Europe. This means that both requirements for membership under Article 5 (1) of the UEFA Statutes are not met.

The Vatican City has its own association ( Federazione Vaticanese Giuoco Calcio ), a football league and its own national team , but it refrains from joining FIFA and UEFA, as there are hardly enough players of Vatican nationality to regularly take part in tournaments can. In addition, there is not a single football field in the entire national territory.

The selection of Catalonia ( Federació Catalana de Futbol ) played their first international match in 1912. So far, admission to UEFA has been rejected on the grounds that Catalonia is an integral part of Spain .

Monaco ( national team of the Fédération Monegasque de Football ) is represented by a club ( AS Monaco ) in the French Ligue 1 , but is not (yet) a UEFA member.

The Turkish Republic of Northern Cyprus ( national team ) of the Kıbrıs Türk Futbol Federasyonu is subject to an embargo as it has split unilaterally from the Republic of Cyprus .

UEFA hosts numerous competitions in which the national teams or club teams of its member associations take part. In addition, UEFA is organizing the qualifying round for the Europe zone for the World Cup . The competitions in detail:

List of World Cup participants who qualified for the World Cup in the UEFA-hosted qualification for the European zone:

As part of World XI, UEFA organizes benefit games at irregular intervals with the European football team , against which the world football team has competed several times , most recently in 2005 and 2007.

The COVID-19 pandemic has hit the UK hard. The number of new infections has increased significantly since the end of May 2021 ; The cause of the increase is the COVID mutation B.1.617 . Similar observations are being made in many other countries as well. Prime Minister Boris Johnson extended the corona measures in the UK by one month in order to "save many thousands of lives".
The final of the 2021 European Football Championship (EM 2021) is currently planned in London. UEFA is threatening Great Britain to move the final of the 2021 European Championship to another country if the British government does not allow the final to take place in front of tens of thousands of spectators by way of an exceptional rule . The FAZ wrote in a comment:

With that, [UEFA] is sticking to the irresponsibility with which it has already insisted that all matches be played in front of spectators, under tougher conditions. How serious UEFA really is with its commitment to the fight against Corona can be seen in the laxity with which hygiene measures - as in Munich - are handled and in their enthusiasm for the Superspreader event in Budapest. Either the UEFA leadership has not understood what has been happening in the world since spring 2020, or it is deliberately putting the well-being and even the lives of many people at risk out of self-interest.

Regarding the illumination of the Munich European Championship stadium in rainbow colors before the preliminary round match between Germany and Hungary on June 23, 2021, the Munich city council asked UEFA to illuminate the facade of the stadium during that match as a sign of diversity and tolerance, something that UEFA is supporting of the DFB refused. As a politically and religiously neutral organization, UEFA rejected the request, citing its statutes. This led to a nationwide wave of protests from almost all political parties, the Protestant Church, numerous companies and other football stadiums, which in turn have the stadiums illuminated in rainbow colors.