The final round of the FIFA Women's World Cup 2003 was the fourth playout of the most important tournament for women's football - teams and was again on 20 September to 12 October 2003 in the United States held. Originally the World Cup was supposed to take place in the People's Republic of China . After the outbreak of SARS , the world governing body FIFA decided at short notice to move to the USA.

The German team won their first world championship title. They impressively won against Russia in the quarter-finals and beat the defending champion and two-time world champion USA 3-0 in front of their own audience. Birgit Prinz was voted the best player of the tournament. With her seven goals she played a major role in the success of the German team and was also the sole top scorer in the 2003 World Cup. The Fair Play Award went to China .

The 2003 World Cup was played in six stadiums in six different cities in the United States.

As four years earlier, the field of participants comprised 16 teams. There were four groups of four teams each. The first two in each group qualified for the quarter-finals. From the quarterfinals, the world champion was played in the knockout system . If no winner was determined after the regular playing time, two 15-minute extra time was played. In extra time, the golden goal rule applied , so whoever scored the first goal in extra time had won the game. If no goal was scored during extra time, there was a penalty shoot-out .

Qualification for the Women's World Cup in 2003 lasted from August 18, 2001 to July 5, 2003. 96 associations had started qualifying for the World Cup, with only 14 teams remaining. The US was automatically qualified to host. China, which was originally designated as the host, also got a direct starting place. The 14 remaining participants in six zones were determined as follows:

Europe had five starting positions at the World Cup. The teams in category A (groups 1–4) played against each other in four groups of 4 teams for the qualification. The four group winners were qualified directly. The four runners-up played between September and November 2002 in return games ("play-off games") for fifth place on the grid. At the end of the qualification, Norway, Sweden, Russia and Germany (group winners) and France (winners of the play-off games) had qualified. The teams in the second category (groups 5-8) only played for promotion to the first category.

South America had two direct starting places. The 2003 South American Women's Soccer Championship was the qualifying tournament . The two best teams (Brazil and Argentina) were able to secure the qualification.

The football association of North and Central America and the Caribbean , CONCACAF , had a direct starting point. Then there was the host USA, who automatically qualified for the finals. The 2002 CONCACAF Women's Gold Cup in the USA and Canada was also the qualifying round. The USA won the tournament against Canada, which qualified with it. The third-placed Mexicans played in two play-off games against the Asian third for another starting place.

In the Africa zone, the women's African Cup of Nations in Nigeria in 2002 was the qualifying tournament. The two finalists reach the finals.

Placements of the participants

In Asia , too , the continental championship was also the qualifying tournament for the FIFA World Cup. The Asian federation had two direct places. China was also given a direct place as "compensation", with which the fourth in the Asian Cup qualified for the play-off games against the CONCACAF fourth. At the Asian women's soccer championship in Thailand in 2003 , the Chinese women won the Asian championship, with North Korea (finalist) and South Korea (third) also qualifying directly. The Japanese won the play-off games against Mexico and also secured their participation.

Oceania had a direct starting place, the qualifying round was held in April 2003 in Australia.

It was the first World Cup participation for Argentina, France and South Korea .

As expected, the hosts and defending champions from the USA confidently prevailed in the preliminary round. As expected, Sweden also reached the quarter-finals alongside the USA. As in their World Cup premiere in 1999, the North Koreans were eliminated after the preliminary round. Nigeria's performance, which had made it to the quarter-finals four years earlier, was disappointing.

The two newcomers France and South Korea did not manage to cause a surprise in the preliminary round. With Brazil and Norway the more experienced and experienced teams prevailed.

Germany delivered a convincing performance in the preliminary round. All three games could be won with at least three goals difference. The German women were particularly strong on the offensive, they scored 13 goals in three games, only the USA scored more goals in the entire tournament (15 in 6 games), but could not match the German team's total of 25 goals in six games to reach. In addition to Germany, Canada qualified for the quarter-finals. For the debutantes from Argentina there was only an extra role in the tournament. Japan lost the decisive game against Canada on the last day of the match and had to travel home.

As expected, China and Russia prevailed in Group D. Ghana and Australia left together like four years earlier.

In a weak game, the USA beat Norway 1-0. Abby Wambach scored the decisive goal in the 24th minute. Sweden managed to beat Brazil, third in the last World Cup, 2-1 in an even game. The German team underscored their role as the title candidate in the quarter-finals. Russia was outclassed 7-1. Martina Müller opened the shooting festival in the first half . After the break, Sandra Minnert (57th), Pia Wunderlich (60th), Kerstin Garefrekes (62nd, 85th) and Birgit Prinz (80th, 89th) met. Canada surprisingly beat the favored Chinese 1-0. Although China dominated the game for almost the entire 90 minutes, the Canadians managed to save their 1-0 lead from the seventh minute over time.

The German team continued their triumphal march in the semifinals. The reigning world champion in women's football, the USA, was dethroned with a 3-0. After the opening goal by Kerstin Garefrekes (15th) it was 1-0 for a long time. Only in stoppage time of the second half did Maren Meinert and Birgit Prinz secure the final score with a double strike. The game is considered by experts to be the best women's soccer game in history. Sweden beat the surprisingly strong Canadians in the semifinals. Canada took the lead in the 64th minute, but Sweden turned the game around in the closing stages with goals from Moström (79th) and Öqvist (86th).

The USA celebrated a conciliatory conclusion against their northern neighbors in the small final. With 3: 1 you could at least secure third place. Canada surprised at the 2003 World Cup with a strong performance and in the end deservedly finished fourth. 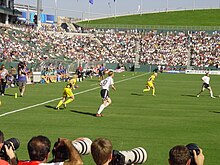 Scene in the final Germany - Sweden

The German women were the happier team in the 2003 World Cup final. The leadership of the Swedes by Hanna Ljungberg (41st) was equalized by Maren Meinert immediately after the break (46th). In the following period the game was completely open. Both teams had a chance of turning the game in their favor. In extra time, it was the substitute Nia Künzer who scored the 2-1 with a header in the 98th minute after a free kick from Renate Lingor from the half-field and Germany secured the world title with the golden goal . Künzer's goal was voted Goal of the Year .

Because of this success, the team was voted Team of the Year in Germany for the first time and Birgit Prinz was named World Footballer of the Year .

See also: List of goalscorers from all world championships

FIFA nominated 12 referees and 22 assistant referees. The experienced Nicole Petignat , referee of the 1999 World Cup final, and assistant Elke Lüthi, both from Switzerland, were nominated from German-speaking countries . No referees were requested from the DFB. The American Football Association also sent two referees, Sandra Hunt and Jennifer Bennett, who only acted as fourth officials. Somewhat surprisingly, the Romanian Cristina Floarea Ionescu was nominated to lead the final. Ionescu had only directed one preliminary round match.

The German Birgit Prinz received the Golden Ball as the best player of the tournament . The Silver Ball went to Victoria Sandell Svensson from Sweden and the Bronze Ball with Maren Meinert also went to a German.

The "Golden Shoe" for the best goalscorer went to the German Birgit Prinz for her seven tournament goals . The "Silver Shoe" went to her compatriot Maren Meinert and the "Bronze Shoe" to the Brazilian Kátia . Since both had the same number of goals together with Kerstin Garefrekes , the assists and then the fewer minutes played decided the ranking.

The FIFA Fair Play Award for the fairest team in the tournament went to China .

11 players were elected to the All-Star team, plus five additional players (in italics). Positions according to FIFA squad lists.