Kerstin Stegemann (born September 29, 1977 in Rheine - Mesum ) is a former German soccer player . The defender / midfielder last played for the second division FSV Gütersloh in 2009 and ended her career with an official farewell game on June 5, 2010 in her home town of Rheine- Hauenhorst . Between 1995 and 2009, she played 191 times for the German national team, making her the second most appearances player after Birgit Prinz . 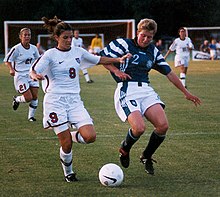 Stegemann began her career at Germania Hauenhorst . In 1993 she moved to VfB Rheine and made her debut in the Bundesliga at the age of 15. At a young age she became a leading player and made her debut on April 13, 1995 in the game against Poland in the German national team, with which she took part in the 1996 Olympic Games in Atlanta. With Rheine she reached the final in the DFB Cup in 1997 , which was lost 3-1 to Grün-Weiß Brauweiler . In the summer of 1997 she became European champion with the national team.

A year later she moved to the top club FCR Duisburg . With Duisburg she was German champion and indoor cup winner in 2000 , with the national team she won the Olympic bronze medal in Sydney . In addition, she made her football teacher license in 2002. After the season she moved to FFC Flaesheim-Hillen , and after the club's financial loss in 2001, she returned to Rheine. Despite many attempts to poach various top German clubs, she remained loyal to FFC Heike Rheine until 2007.

The year 2003 was her most successful year: on August 28, 2003 with the game against the Czech Republic she reached the “ Club of Hundreds ”, she became world champion with the national team and won the indoor cup with Rheine. On November 23, 2006, she played her 150th international match against Japan . On March 10, 2008, she made her 175th international match at the Algarve Cup against Sweden and is the player with the most appearances in the national team after Birgit Prinz .

After relegation with Rheine in 2007, she moved to the newly promoted SG Wattenscheid 09 despite several offers from top clubs . After the coach Tanja Schulte was fired and her successor André Birker resigned after a few weeks, Stegemann became player- coach for the rest of the season , but could not prevent relegation. For the 2008/09 season she moved to the newly promoted Herford SV . On August 9, 2008, she played her 182nd international match. She is now one of the 18 women who have played more international football matches than Ahmed Hassan , the men's record international player. For the 2009/10 season, Stegemann moved to FSV Gütersloh 2009 . After the European Championship in Finland in 2009, she ended her career in the national team.

In June 2012, Stegemann made a surprising comeback in the final of the Westphalia Cup in Germania Hauenhorst's jersey.

Kerstin Stegemann is a trained technical draftsman. Since 1998 she has been a soldier in the sports promotion of the Bundeswehr and since 2006 a professional soldier . She is currently stationed in the sports promotion group of the Bundeswehr sports school in Warendorf and holds the rank of sergeant major . Together with sergeant- major Frank Woycke, she trains and supervises the Bundeswehr women's national soccer team and became world champion with her team at the CISM soccer world championship in the Netherlands in 2008. She is committed to the protection of non-smokers.