The UEFA European Football Championship women (even briefly Women's EURO ; English UEFA Women's EURO ) is the first conducted in 1984, competition for national football teams of the women's national football associations, the European football association UEFA belong. Since the second European Championship in 1987 - with the exception of 1995 - there has been a final tournament that was held every two years until 1997, and since then only every four years, one year after the men's tournament . In 1995 the European Championship was played without a final round. 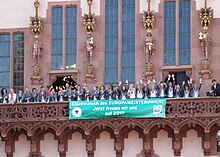 The DFB selection after winning the European Championship in 2009

As early as 1969 and 1979, unofficial European championships were played in Italy. The first time the hosts prevailed, the second time Denmark's selection . In 1980, UEFA decided to introduce the European Women's Football Championship. The first competition was played over two years between 1982 and 1984. The first European champions were the Swedes , who beat England in the final . 1987 saw the first four-team finals. Norway used their home advantage and defeated the defending champions 2-1. Two years later, the German team qualified for the finals for the first time. In Osnabrück , the hosts beat Norway 4-1.

The next European Championship was played under the official title of the UEFA European Women’s Championship today. In 1991 the Germans were the first team to defend their title. This time, however, it took extra time to beat Norway 3-1. The following European Championship in 1993 in Italy was the last in which Germany did not become European champions. Norway beat Italy 1-0 to win their second title. Two years later, due to the World Cup taking place in the summer of the same year, there was no final round. Germany defeated Sweden 3-2 in the final in Kaiserslautern .

For the 1997 European Championship, which was held in Norway and Sweden, the field of participants in the final round was expanded from four to eight teams. At the same time, the EM was no longer the European qualification for the World Cup . The German dominance continued. In the final they won against Italy 2-0. The setting was disappointing. Only 2,221 spectators saw the final - a record to date.

In 2001 the EM took place in Germany for the second time. The golden goal rule was used for the first time. With such a golden goal by Claudia Müller , the German team won 1-0 in the final in Ulm against Sweden. In 2005 the EM took place in England. The German team beat Norway 3-1 in the final and won the fourth consecutive European championship and the sixth overall.

The tenth European Championship took place in Finland in 2009 . The field of participants in the final round was expanded from eight to twelve teams. Germany beat England 6-2 in the finals with the highest number of goals in tournament history. At the 2013 European Championship in Sweden, the eleventh edition of the tournament, Germany was able to defend the title with a 1-0 win against Norway, although Germany lost 1-0 to Norway in the group stage (the first EM defeat of a DFB women's team). Teams for 20 years).

Sixteen teams (including five debutants) took part in the finals of the twelfth European Championship in 2017 in the Netherlands for the first time. Four groups of four were formed during the draw. The first and second in each group advanced to the knockout phase of the tournament. Defending champions Germany were eliminated in the quarter-finals against finalists Denmark. Host Netherlands reached the final of a European women's championship for the first time and won the title with a 4-2 win against Denmark.

In order to be able to take part in the European Women's Football Championship, the national teams must pass a qualification. The mode was changed several times. For the 2013 European Championship, qualification was carried out in three stages. First, the eight weakest teams played a pre-qualification in two mini-tournaments. The group winners then formed three groups of six and four groups of five teams each with the remaining teams. Within the groups, each team played once at home and once on the opponent's court against every other team in the group. The group winners and the best runner-up in the group qualified directly for the European Championship. The six remaining runners-up determined the remaining three participants in the first and second leg. The games were drawn. Since qualifying for the 2017 European Championship, only the two worst runners-up in the group are still in the second qualifying round. The eight group winners and the six best runners-up in the second qualifying round qualify directly for the final round. The host country has only automatically qualified for the finals since 2005. Previously, the host was only chosen after the finalists had been determined.

In 2009 and 2013, 12 teams each competed in a tournament for the title of European champion. There have been 16 teams since 2017. In the first tournament phase (group phase) until 2013, the teams were randomly divided into three groups of four teams each, with some teams selected according to certain criteria (hosts, European champions, FIFA rankings) and the other teams drawn from draw pots based on skill level become. As of 2017, the game will be played in four groups with four teams each.

Each team plays once in the preliminary round against each other team in its own group. A win is rewarded with three points, a draw with one point. The group first and second safely reach the quarter-finals. In addition, in 2009 and 2013 came the two group third with the best points. If two or more teams are tied, there are several criteria that lead to a decision. First of all, the better goal difference counts. If this is also the same, the number of goals scored counts.

From the quarter-finals onwards, the knockout system continues. This means that only the winner moves on to the next round, while the loser has to be eliminated. If there is a tie after the regular 90 minutes, the game goes into overtime . At the EM 2001 , extra time was played according to the golden goal rule, i. H. the team that scores the first goal in extra time wins the game. Such a golden goal from Claudia Müller made the German team European champions in 2001. However, this rule was abolished, so that since 2005 a full overtime has been played again. If there is still no winner after extra time, the game will be decided on penalties .

Until 2013, two teams from the same preliminary round group could meet again in the semi-finals at the earliest, at the 2017 European Championship this was possible again in the finals at the earliest. A game for third place has not been played since 1995. The winners of the semi-finals play for the European title in the final. The European champion receives a trophy and is allowed to wear the title until the next European championship.

There were a total of thirteen different participants in the eleven European Football Championship finals that have been held to date. Two final rounds, 1984 and 1995, were played in a pure knockout system with a return leg. The following overview shows which country took part in which final round for the first time.

The tournaments at a glance

1As in 1984, there has not been a third-place match since 1995. Of the semi-finalists listed, the first named was defeated by the eventual European champion, the second named to the other finalist. 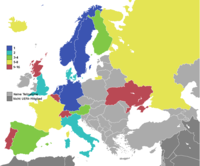 Best performance of the national teams (as of 2017)

Overview map of the most frequent participations (as of 2017)

This list summarizes the results of all European championships in which a final round has taken place. The European Championships in 1984 and 1995 are therefore not included here. Games that are decided on penalties will be counted as a tie with the result after extra time has ended .

The following table lists all top scorer of the European Championship finals.

Players who are still active are printed in bold.

Note: Year in italics = no insert

1The reports submitted on time are counted regardless of whether they were withdrawn or not started before the start of the qualification; including defending champions and hosts.