The Spanish selection has qualified for a major tournament five times so far. In 1997 they reached the semi-finals of the European Women's Football Championship . In 2013 and 2017 , the final round was also reached, but where the team was eliminated in the quarter-finals. In 2015 the Spaniards took part in a World Cup finals for the first time, but failed there in the group stage. The Spanish women were also able to qualify for the 2019 World Cup . The U-19 selection and the U-17 selection, which have already won a total of seven European titles, are more successful. In addition, the U-20 team was made runner -up in 2018 . 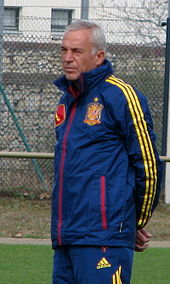 The national team was coached from 1988 by Ignacio Quereda. After the 2015 World Cup, he was replaced by Jorge Vilda.

All results from a Spanish perspective.

The Spanish national soccer team for women in international tournaments