The Brazilian national women's soccer team is a representative selection of Brazilian women soccer players for an international match.

The Brazilian women first appeared in an international match in 1986, making them the first South American team to play FIFA-recognized internationals. They are now the dominant team in South America and are among the best national teams in the world. The best results so far have been second place behind the German team at the 2007 Women's World Cup and two Olympic silver medals in 2004 and 2008 , with the USA losing in the final. The player Marta was the top scorer and best player of the tournament in 2007 and has now scored the most World Cup goals.

At the Olympic Games they reached the semifinals four times. They managed to win against the German women's national team in the 2008 semi-finals for the first time. In 2012 , the quarter-finals against world champions Japan came to an end.

At the South American Women's Championships , the Brazilian national team won the first four tournaments. Argentina was beaten in the only two finals . Only in 2006 did the Brazilian team finish second behind Argentina, against which the decisive game of the finals was lost (there was no real final at this tournament, as was 1991, 2003 and 2010). In 2010 the title was brought back.

However, there has been a slight step backwards in recent years. This can also be seen in the results of the juniors: In 2002 and 2004 , the U-20 national team finished fourth in the World Cup. In 2006 they reached third place and in 2008 they reached the quarter-finals, where the U-20 team were eliminated by Germany. In contrast, in 2010 and 2012 the end came in the preliminary round. The U-17 team was eliminated in the preliminary round of the World Cup in 2008 and in the quarter-finals in 2010 and 2012 .

In March 2009 the team reached 2nd place in the FIFA world rankings for the first time , but fell back to 3rd place in September, after the German team won the European championship again. Due to the success of Japan, Brazil dropped to fourth place in December 2012. The worst ranking so far is 10th place from August 2016.

Brazil is the record winner of the South American Championship with seven titles.

The Brazilian team is the record winner with 3 wins at the women's soccer tournament of the Pan American Games, which has been held since 1999.

The Brazilian association has been organizing the four-nation tournament in Brazil since 2009 , which the team has won six times. Only in 2010 did the Canadians have to win.

Brazil took part in the Algarve Cup for the first time in 2015 and achieved seventh place. In 2016, Brazil finished second in the 2016 Algarve Cup .

Results always from a Brazilian point of view 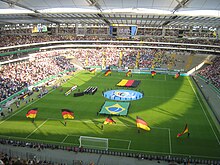 Before the international match on April 22, 2009 in Frankfurt

So far there have been no games against the Austrian selection .