Rosana dos Santos Augusto , called Rosana (born July 7, 1982 in São Paulo ) is a former Brazilian soccer player . She has been a member of the Brazilian national team since 2000 and has participated in four World Cup tournaments and four times in the Olympic Games. At club level, in addition to her native Brazil, she also played in Austria, France, Norway and the USA and won various championships and cups. On January 2, 2019, she officially announced the end of her active career. 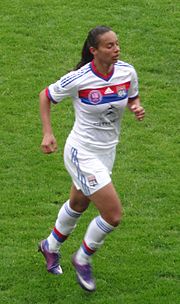 Rosana in the jersey of Olympique Lyon (2012)

Rosana first played for the clubs FC and Corinthians in her hometown of São Paulo and then in Porto Alegre for SC Internacional . This was followed by a detour to Austria to the local champions SV Neulengbach where she was footballer of the year in 2005 . In the four seasons in which she played there, the club lost only two league games and was always champions and cup winners. In the 2005/06 season she was the top scorer with 26 goals. A year later, she scored 18 league goals . In the UEFA Women's Cup 2006/07 , however, she failed with Neulengbach in the first round at the Icelandic club Breiðablik Kópavogur . A year later, the team failed in the second round to defending champions Arsenal .

For the 2009 season, she moved to the newly formed US League Women's Professional Soccer and played for Sky Blue FC . After the league round, the team was only in fourth place, but that was enough to reach the playoffs and in these both games and thus the title were won. In the two following seasons, only fifth place was achieved and the playoffs were missed. After that, the WPS was discontinued for financial reasons. Rosana then returned to her homeland and played for Centro Olímpico. In September 2011 she signed a contract with Olympique Lyon . With Lyon, she won the triple of championship, trophy and UEFA Women's Champions League in 2012 .

In 2013 she moved to Norway and played for the newly promoted Avaldsnes IL in the Toppserien 2013 . At the end of the season, the club had secured the league membership with 4th place and reached the cup final, but lost it 0-1 against Stabæk . After finishing 5th in the following season, she left Norway at the end of the season and returned to her home country for two months to win the Copa Libertadores Femenina 2014 and the International Women's Club Championship with São José EC .

For the 2015 National Women's Soccer League season , she got a contract with Houston Dash . Due to a decision by the Brazilian Association to bring the national players together in preparation for the 2015 World Cup and the 2016 Olympic Games in the national training center, she was not used for Houston.

After the 2015 World Cup, she went back to Norway. With Avaldsnes IL she reached second place in the championship and the cup final, in which she scored a goal, but lost 3-2 to Lillestrøm SK Kvinner . She then moved to France, where she played for Paris Saint-Germain. With the Parisians, she reached the semi-finals of the 2015/16 UEFA Women's Champions League , but lost 7-0 to rivals Lyon in their first game.

For the 2017 season of the NWSL , she switched to the North Carolina Courage franchise , which had bought the team of the reigning champions Western New York Flash before the start of the season . In October 2017 she played for the club cooperative of SC Corinthians and Grêmio Osasco Audax in the competition for the Copa Libertadores, to which she contributed a goal. She then played in November and December for SC Internacional in the finals of the state championship in Rio Grande do Sul.

Rosana played her first international match on June 23, 2000 at the CONCACAF Women's Gold Cup 2000 , in which Brazil participated as a guest. In the 8-0 win against Costa Rica in the first group game, she was in the starting line-up. In the two following group games she was not considered, but was substituted on in the semifinals against the Chinese national soccer team , which also participated as a guest. The final against the USA was reached by a 3-2 draw , in which Rosana was back in the starting line-up. But the final was lost 0-1. Her first goal in the national jersey , she scored on July 18, 2001 in an unofficial game against the University of New Jersey , which was won 16-0. Their first official international goal followed on August 7, 2001 in a 1-1 draw against Japan . Rosana was then also part of the squad for the 2003 South American Football Championship , where Brazil defended the title and qualified for the 2003 Women's World Cup and the 2004 Olympic Games . However, Rosana was only used in the first group game of the final round, for which Brazil was automatically qualified. In the 3-2 win against Argentina , she contributed the third goal. Further missions followed at the football tournament of the Pan American Games , where she won the gold medal in the final against the Canadian U-23 team. She was then nominated for the 2003 World Cup in the USA and was used in the four games in which she scored a goal in a 4-1 win against former world champions Norway . Brazil reached the quarter-finals, in which they were eliminated against the eventual finalists Sweden .

In April 2004, she took part in three unofficial games in the United States, in which she scored a goal in every game. At the Olympic football tournament in Athens in 2004, it was also used in all the Seleção games. Brazil failed only in the final against the USA and celebrated the greatest international success to date with the Olympic silver medal. Rosana was unlucky in the third minute when a shot from her from 23 meters flew just over the goal.

Her next tournament was the South American Championship in 2006 , in which she was used in the first three preliminary round games and the three games in the final round. With a 2-0 defeat in the last group game against Argentina, they were only second behind the Argentinians for the first time after four titles in a row. So they had qualified for the 2007 World Cup, but to take part in the 2008 Olympic Games they had to run second in the South American Championship against the second in the Africa qualification. At the Pan American Games in 2007 , however, the title could be defended - this time against the US U-20 team . Rosanna had scored both goals in the semifinals for a 2-0 win against Mexico . She was then not used in the World Cup preparatory games against Swedish club teams and the Japanese national team, but was nominated for the World Cup in China . There she was only substituted on in the three group games and the final, which was lost 2-0 to Germany .

In 2008 she was used in the first game of the year, the playoff qualifier for the 2008 Olympic Games against Ghana (5-1 win), and in all official and unofficial games before the Olympic Games in Beijing, and was also nominated for the Games. In China, however, she was only used in the three group matches and as a substitute in the final. As in 2004, the Seleção failed in the final against the USA. Her teammates had previously defeated the reigning world champions Germany in the semifinals.

In 2009 it was not used again until December at the first four-nation tournament in São Paulo . At the South American Women's Football Championship in 2010 , she played all games in the preliminary round and two games in the final round, although she was sent off in the third group game of the preliminary round against Colombia according to RSSSF statistics . With the renewed South American title, the Brazilians qualified for the 2011 World Cup and the 2012 Olympic Games. At the end of 2010, they won the second four-nation tournament in São Paulo with Brazil.

At the 2011 World Cup , she scored the goal to win 1-0 in the first group game against Australia . She also scored a goal in the 3-0 game against Norway. In the quarter-finals against the USA, Brazil had to go to penalties after conceding a last-minute goal to make it 2-2 in extra time and lost it. At the Pan American Games 2011 the title could not be defended, in the final the Brazilians lost to the Canadians 3: 4 on penalties. In contrast, the title was defended at the four-nation tournament in São Paulo.

At the Olympic Games in London , she and her team were eliminated in the quarter-finals against world champions Japan. The title at the four-nation tournament in São Paulo was defended again in 2012, 2013 and 2014.

In June 2014, she made her 100th international match as the second Brazilian . For the South American Championship 2014 , which fell in the current Norwegian season, it was then not taken into account.

At the 2015 World Cup , Rosana was only used in the game against Costa Rica. Their team reached the round of 16 as the only team without conceding a goal, but lost it 1-0 to Australia and was eliminated. For the following Pan-American Games in Toronto , she was just as neglected as for the Four Nations Tournament in December, the Algarve Cup in 2016 and the 2016 Olympic Games in her home country . In 2017 she was used again in five games, most recently against Australia on September 19, 2017.

Podium at the 2007 Pan American Games