The Football Club Girondins de Bordeaux is a French football club from the southwestern French city of Bordeaux , the most Gironde is the estuary of the river Garonne mentioned - hence the club changed its name. He was at the turn of 1881 established / 82, its football department permanently, however, until 1919; the name changed several times due to mergers and bankruptcy (1991), but the part of the name "Girondins" was always retained. The club colors are dark blue and white.

The first football team played first in the Stade Vélodrome (later renamed Parc Lescure ) and then in the Stade Jacques-Chaban-Delmas . The Stade Matmut-Atlantique has been the new venue since mid-2015, offering space for around 42,000 spectators. The majority of shares in the association was owned by the private television broadcaster M6 , whose shares were taken over by the US investment fund GACP Sports (General American Capital Partners LLC).

The club was founded on October 1st, 1881 as a gymnastics and shooting club. Chaired by André Chavois, the club added rowing , horse riding , swimming and other sports to its activities. It was not until 1910, and after strong pressure from the club, especially by club president Raymond Brard, that football was added to the activities on a trial basis. The soccer experiment only lasted a year and was only restarted ten years later in 1919. The first official game was won 12-0 against Section Burdigalienne in 1920.

Bordeaux achieved its professional football status on July 2, 1936 through the merger with the neighboring Bordeaux sports club Girondins Guyenne Sport, which led to the club known today. Bordeaux's rise as a professional team coincided with the progressive professionalization of the French Football Federation, which did not exist before 1932. The club was assigned to the French second division and made its debut in the 1937/38 season. The club's first coach was the Spaniard Benito Diaz. This brought the Spanish players Santiago Urtizberea and Jaime Mancisidor to the club. The latter later served the club as captain. The club's most famous French players were striker Henri Arnaudeau and goalkeeper André Gérard. The first official game ended 2-1 and took place on May 23, 1937 against the Alpine club FC Scionzier. The first league game ended with 2: 3 against Toulouse. The first victory could be won against Nîmes Olympique . The season ended the club in 6th place in the final table. The disappointing conclusion meant that Bordeaux had to take part in the relegation relegation, but where the team was able to occupy a respectable 3rd place. A year later, Bordeaux moved to today's Chaban-Delmas stadium , previously known as Parc Lescure. The stadium was specially built for the 1938 World Cup and was then intended for Girondins Bordeaux. The club had previously played its games in the Stade Galin, which is now used as a training ground.

On October 15, 1940, Bordeaux merged with the local sports club AS Port and took over the tradition of the scapular , the triangle in the club's crest and on the shirts , which is still known today . Under the new name Bordeaux ASP, the club with the scapular ran in the final of the Coupe de France in 1941. The game, played in occupied France , was hosted at the Saint-Ouen stadium and ended 2-0 against SC Fives with Urtizberea scoring twice. The victory in the Coup de France was the club's first major triumph. In 1943 they were back in the final of the Coupe de France against Olympique Marseille. However, the game was lost 2-0. It was the first final defeat in a series of seven defeats that would last into the 1980s. After the liberation of France , Bordeaux rose again in the league and rose to the first division, after they previously occupied a 2nd place in the 1948/49 season. After the season, the then coach André Gérard hired the Dutchman Bertus de Harder . Through the players de Harder, Édouard Kargu and Camille Libar , Bordeaux won the first league title in the club's history in the following season 1949/50 in the first season of his membership in the first division. The pursuer Lille could be distanced with six points. The success justified the club in the participation of the Coupe Latine , in which he played 3: 3 in the final against Benfica Lisbon and was only defeated by the only goal of the day in stoppage time of the repeated game.

Two seasons after winning the title, Bordeaux secured their title claim by finishing second behind OGC Nice . In 1952 and 1955 the Coupe de France final could be reached. In the first attempt they failed again at OGC Nice in a match with eight goals, five of them in the first 40 minutes, with 5-3. Henri Baillot had meanwhile equalized to 3: 3. In the 1955 Cup final , Girondins was beaten 5-2 by Lille after Lille took a 4-0 lead after 35 minutes. The defeats of the Cup also radiated from the league when Bordeaux was relegated in the 1955/56 season. The renewed rise in the 1959/60 season was followed by immediate relegation as bottom of the table with only 21 points.

In the 1960s, Bordeaux, with the former player Salvador Artigas as coach, was able to find its way back to old strength. Under Artiga's direction, the promotion was made perfect in the 1961/62 season , followed by a respectable fourth place in the 1962/63 season. In the following season, Bordeaux was represented again in the final of the Cup, in which they lost again, this time with 2-0 against Olympique Lyon . Both goals were scored by the Argentine Nestor Combin . The second place at least entitled to participation in the trade fair trophy for the 1964/65 season . After a 4: 3 return match, they were eliminated from the competition early on against Borussia Dortmund . Four years later, the Coupe de France final could be reached again - the seventh participation in the cup final. Against AS Saint-Etienne they were not granted a triumph after a 2-1 win. The eighth participation, one season later, brought no change. Again they failed 2-0 against Olympique Marseille . Despite the arrival of Alain Giresse, the team experienced a severe qualitative decline during the 1970s. The team had to work with seven different coaches and ended up steadily in the lower half of the table. In 1979 the association was sold to the influential and ambitious real estate mogul Claude Bez, who set himself up as president.

In the summer of 1983 the club organized a tournament of the century. Bordeaux won 2-0 against FC Barcelona in the semi-finals of the tournament. In the final of their own tournament, however, they were beaten by VfB Stuttgart . 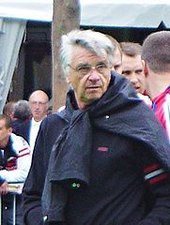 Led by the 1970s greats Giresse and Gernot Rohr , Bordeaux won its first championship title since 1950 in the 1983/84 season . At the end of the season they were tied with AS Monaco at the top of the table. Because of the direct comparison gained , Bordeaux was champion. In the following season 1984/85 the championship title could be won again with four points ahead of the runner-up FC Nantes . On the European stage they reached the semifinals in the European Cup in the 1984/85 season after victories over Athletic Bilbao , Dinamo Bucharest and Dnipro Dnipropetrovsk before losing to Juventus Turin . In the 1986 Coupe de France, Olympique Marseille could finally be beaten 2-1. Tigana and Giresse were the two goalscorers for Bordeaux. The victory in the final of the Coupe de France was the first after eight attempts and the first cup win since 1941. In the following season the cup was won again. Marseille could be beaten after goals from Phillippe Fargeon and Zlatko Vujović . Bordeaux closed the 1986/87 season by winning the championship.

After the successes of the 80s, the French championship was last brought to Bordeaux in 1999 and 2009 .

In the 2012/13 season of the Coupe de France, Girondins was able to win the final against the second division Evian TG 3-2 and win the cup again.

The league team was taken over by Willy Sagnol in summer 2014 . On March 14, 2016, the club announced that Willy Sagnol had been released as a trainer - the former French national goalkeeper Ulrich Ramé took over the team until the end of the season . At the end of May, Girondins introduced Jocelyn Gourvennec , who had previously worked for EA Guingamp for six years , as the new coach. He was removed from office on January 18, 2018 due to unsuccessfulness.

Trophy of the tournament for the centenary of Girondins Bordeaux

Essential players and coaches for the club in the past

Since mid-2015, a women's football department , the Girondines , has been part of the club for the first time . This was created by the transfer of the women of the neighboring Entente Sportive Blanquefortaise , whose starting place in the second division Bordeaux has taken over for the 2015/16 season. The teams in the youth and adult sector continue to train at the Stade Jean-Pierre Delhomme in Blanquefort , where they also play most of their games. For the 2016/17 season , the Girondines were promoted to the first French league , in which they have developed into a top team since 2018 .