The title of this article is ambiguous. Further meanings are listed under Coupe de la Ligue (disambiguation) .

The Coupe de la Ligue (German: League Cup ) was a French soccer cup competition , in which only men's teams were allowed to participate, which have professional status in the respective season; At the last event for the time being (2019/20) these were the 40 clubs from Ligue 1 and Ligue 2 as well as five clubs from the third- tier National 1 . It was organized by the Ligue de Football Professionnel (LFP). It was also only the third most important national title in French football behind the national championship and national cup (“Coupe de France”) . After the end of the 2008/09 season, consideration was given to abolishing the competition. The background to this was the desire of numerous clubs to no longer award the league cup winners, but rather the fifth in the Ligue 1 table a place in the UEFA Europa League . This would, however, have lost the basis for the 10 million euro contract with France Télévisions , which acquired the broadcasting rights. In June 2009 the station prevailed and in the following period the automatic qualification of the competition winner remained. The general director of the 2009 league cup winner Girondins Bordeaux , Alain Deveseleer, assessed the importance of the Coupe de la Ligue with the words:

"You are interested in this trophy from the semi-finals at the earliest and only when there are no other, more important games."

According to a non-representative survey, almost two thirds of French football fans also express the opinion that the league cup is nothing more than "a consolation round for clubs that have stumbled in the league" .

In September 2019, the LFP decided to hold the competition for the last time in the 2019/20 season, but kept the back door open to "revive it at a later date".

Origin and mode of execution

The national association FFF introduced the competition in 1991 - it is now organized by the Ligue de Football Professionnel (LFP) - after it had a forerunner, the Coupe de l'été ( Summer Cup), which was held only every two years in the early 1980s ), had given. However, the league cup was initially only a shadowy existence during the summer break, because the larger clubs in particular did not take part or only sent their reserve team. It was only when victory in this competition was upgraded with qualification for the UEFA Cup (1994/95) that the Coupe de la Ligue gained in sporting value. At least the finals (now regularly held at the Stade de France ) also attract large crowds: in 2007, 79,702 paying visitors exceeded the previous record (78,721 in 2005).

In the first round, the clubs of the third and second division were initially among themselves, while the first division only intervened in the round of the last 32 teams, in which 12 lower-class teams were then left. Up to and including the quarter-finals, the league cup was held before the winter break.
Otherwise, the league cup was played according to the "classic" cup mode; This means in particular that from the round of 32 onwards, the respective fixtures will be drawn without seeding lists or a pre-sorting of the clubs from all clubs still in the competition and only one game will be played, at the end of which a winner has to be determined (be it through overtime and penalty shoot-outs) who then qualifies for the next round, while the loser is eliminated. The right to the home is also determined by lot for each encounter.

However, the President of the LFP, Frédéric Thiriez , had already discussed some changes to the mode in 2006: according to this, four clubs should be set as "group heads" in the future, according to which draws can be dispensed with completely from the second round because - similar to World Championship finals - all fixtures up to the semi-finals have been determined. Thieriez 'proposal to give the two clubs that qualified directly for the Champions League the bonus of not having to intervene in the competition until the round of 16 has been practiced since 2007, although in France it was not only criticized by the "small" clubs was.

Most successful participant since 1995 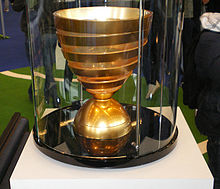 The association and media statistics only take into account the events from 1995 onwards. Paris Saint-Germain is a record winner with nine titles. Girondins Bordeaux, Olympique Marseille and Racing Strasbourg have each won the Coupe de la Ligue three times; Olympique Marseille were also the first club to defend the League Cup. The only second division team to win the trophy was FC Gueugnon in 2000.

Paris SG (ten times), Bordeaux and Olympique Lyon (six times each) were most often in a league cup final.