The DFL-League Cup (officially from 2005 Premiere League Cup until 2004 DFB -Ligapokal ) was a 1997-2007 existing football competition in Germany, as well one-week mini-tournament before the start of the Bundesliga season between mid-July to early August was held.

Although it was the third most important title in national club football after winning the German Championship and the DFB Cup , the sporting importance of the competition was minor. Financially, the event, officially called the Premiere League Cup after its title sponsor Premiere, from 2005 onwards and endowed with a total of 5.2 million euros in prize money, was quite attractive for the participating clubs.

There was already a league cup competition in the 1972/73 season. Hamburger SV was the winner of this one-time tournament to bridge the extended summer break due to the Olympic Games in Munich .

League cup competition 1972/73 due to the Olympic Games

In the 1972/73 season , a league cup competition was held for the first time. With the tournament taking place at that time, the summer break, which was extended to mid-September due to the Olympic Games in Munich, was to be bridged. The 32 teams taking part in the competition were divided into eight regional preliminary round groups, which played out their respective winner, who qualified for the quarter-finals, in a round-trip round held during the summer break. After the later league cup winner Hamburger SV prevailed first against Eintracht Braunschweig and then against FC Schalke 04 during the quarter and semi-finals during the rest of the season , he defeated Borussia Mönchengladbach 4-0 in the final on June 6, 1973 .

Replica of the official DFL trophy

Until a league cup was reintroduced in 1997, the DFB Supercup , which from 1987 onwards was played between the German champions and the DFB cup winners immediately before the start of the season , as well as the one from 1986 as an unofficial preparatory tournament during the summer break in smaller towns in the "soccer province" taking place Fuji Cup . Since the Fuji Cup advanced into a dimension that the official Supercup of the DFB had not yet reached, the DFB first introduced a clause that stipulated that cup winners and champions would not be invited to the Fuji Cup tournament at the same time in order to avoid a premature Supercup game. For the 1997/1998 season, the two competitions were finally replaced by the newly created DFB League Cup.

The first tournament started with a surprise when Karlsruher SC defeated Bayer 04 Leverkusen, the favorites, 2-2 after 90 minutes and 6-5 on penalties in the preliminary round . In the semifinals, however, the KSC failed at the cup winner VfB Stuttgart . In the second semi-final, champions FC Bayern Munich won 2-0 against Borussia Dortmund , so that the first final of the league cup was VfB Stuttgart against Bayern Munich. In the Leverkusen BayArena , the audience saw a varied final, in which Giovane Élber, who had recently moved from Stuttgart to Munich, scored a goal against his ex-club and thus won the record champions their first title of the season with a 2-0 victory in the final League Cup title ever secured.

After Bayern Munich also won the competition in the three following years, Hertha BSC prevented Bayern's fifth league cup success in 2001, when they defeated the defending champion and newly crowned Champions League winner 1-0 in the semifinals and thus for the first Defeat of Munich in the League Cup competition at all caused. Hertha BSC finally won the final against cup winners FC Schalke 04 4-1 and thus secured their first title since 1931. In 2002 the final pairing was Hertha BSC against Schalke 04, and again the Berliners prevailed 4-1 and defended the title.

The meaning of the league cup in its form was repeatedly debated between 1997 and 2007. In May 2003 it was discussed whether a league cup with 32 teams (18 first division and 14 second division) should be carried out from the 2004/05 season. The game should be played in the months of July (with a return leg), December (from then on only knockout rounds), January, March and April (finals). At that time, consideration was given to granting the winner a place in the UEFA Intertoto Cup or the UEFA Cup .

After only 23,195 and only 27,650 and 40,000 spectators for the semi-finals found their way into the stadiums in 2006, Karl-Heinz Rummenigge criticized the low level of audience interest in the league cup. Rummenigge also suggested moving the league cup to Asia in order to better market FC Bayern Munich and the entire Bundesliga there. An increase to 16 clubs and a staging of the competition parallel to the Bundesliga was also considered, which, however, could not have been implemented until 2008 due to the contract with the name sponsor Premiere .

In 2007, the idea was put forward to have the competition redesigned in winter from the 2008/09 season. Models of thought were a tournament with 16 (first division only) or 36 teams (all first and second division) and an international starting place (UEFA Cup) for the winner. The plan was to have the final on Boxing Day. The plans to expand the league cup from the 2008 season to 16 clubs and a playing time that includes the entire summer break met with criticism from the DFB and the second division clubs. The DFB feared a devaluation of the DFB Cup, while the second division clubs called for an expansion to all professional clubs. In the autumn of 2007, DFL President Reinhard Rauball announced that the competition would not be held in the summer of 2008, mainly for scheduling reasons. Other reasons were that on the one hand the three-year contract with the previous namesake and sponsor Premiere had expired in 2008 and on the other hand the DFL wanted to make a fundamental decision on whether the competition should be abolished in general or whether it should be held again in a new mode from 2009.

In 2008, the league cup was considered as a possible source of money, in addition to increasing the Bundesliga to 20 clubs. In a poll by "Kicker", 18 of the 36 professional clubs voted for the increase, 24 were for the league cup. Four clubs stated that they only wanted to support one of the two possibilities. In September 2008, the majority of the managers of the First and Second Bundesliga were in favor of the reintroduction of the League Cup. The shape of the new format, however, never became concrete. According to Holger Hieronymus, there was only a "model of thought" according to which all professional clubs should take part in the competition. This should be played according to a seeding list that should reflect the final table of the previous season. In the first round, the 20 "worst" teams should play against each other. In the second round, the ten winners would have met the ten higher ranked teams. The internationally represented clubs would only have joined in the third round. Overall, the league cup should be played in six rounds. There was also talk of a "Supercup" between the champion and the league cup winner. A possible starting place in the UEFA Cup was not intended for the winner of the league cup.

There was also a model from the company Sportfive , which provided for a league cup with seven rounds. This model should also be based on a seed list from 1-36. The first two rounds would have taken place in July, while in round 1 the twelve worst second division clubs would have met. The six winners would have met the six best second division teams in round 2. In January, the winners from the second round would have met the ten worst Bundesliga clubs in round 3. The eight victorious teams would have met the European Cup participants in the round of 16. The final was also planned for January in Leipzig. In addition, a game of the League Cup winner against the fifth in the Bundesliga for a UEFA Cup starting place was planned. In the same year it was decided to suspend the league cup for 2009 as well.

In May 2010 there were again discussions about increasing the number of national leagues and reintroducing the league cup. However, both ideas were not implemented.

Most recently, in February 2016 , Klaus Allofs brought up a league cup competition in order to react to the English TV billion contract. He also called for the clubs and the DFL to be opened up further. He also brought in a reform of the Supercup.

After the 2008 league cup was canceled, the club boards of Bayern Munich and Borussia Dortmund (champions and cup finalists from the previous season) decided to revive the Supercup instead. However, the request to host this game was rejected by the DFL. Therefore, the Supercup 2008 only took place in an unofficial setting as the T-Home Supercup , Dortmund won 2-1. The league cup did not take place in 2009 either because the DFL wanted to clarify a possible increase in the first and second Bundesliga before reforming the league cup. According to an agreement between champions VfL Wolfsburg and cup winners Werder Bremen , the Supercup was once again played in one game in the Wolfsburg Volkswagen Arena for the Volkswagen SuperCup . Bremen won 2-1. The DFL Supercup has been officially held again since 2010 .

Also in 2009, before the start of the season, the Telekom Cup (2009 as T-Home Cup , 2010–2012 as LIGAtotal! -Cup ), an unofficial invitation tournament with four teams (similar to the Fuji Cup before 1997) sponsored by Deutsche Telekom , held annually since then. In contrast to the league cup, the placement in the past Bundesliga season is only partially decisive for participation and the playing time is only twice 30 minutes and once 45 minutes (since 2015). Nevertheless, the tournaments are often referred to as the league cup (successor) in the media.

The German champions, the runners-up, the next three best-placed clubs in the final table of the Bundesliga of the previous season and the DFB club cup winners took part in the league cup. If the cup winner was among the top five in the final table, the sixth also took part. Teams that competed in the UI Cup have also been allowed to take part in the League Cup in recent years.

In 2007 the champions of the 2nd Bundesliga took part in the Premiere League Cup. This lost the place for the fifth in the first division.

The game was played in the knockout system with two preliminary round games, two semi-finals and one final. The champions and cup winners only intervened in the semifinals. If the DFB Cup winner was also a champion, he was replaced by the loser of the cup final. In the event of a tie after the end of regular time, there was an immediate penalty shoot-out.

Central Stadium Leipzig before the 2007 final

In the past, the venues were mostly cities with traditional football clubs, which only played in the third division or lower (for example Jena , Aue , Osnabrück , Dessau , Aalen or Koblenz ). The final has so far mostly been played in a second division or smaller first division stadium. 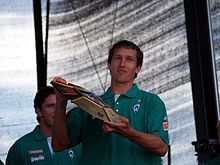 Following the final, the winner of the competition also received the league cup as a trophy . The trophy created by the jewelry atelier Tom Munsteiner in Stipshausen in the Hunsrück when the competition was reintroduced in 1997 is designed as a hexagon, which represents the subdivision of a football in a stylized form. The six Brazilian rock crystals located in the middle of the ten kilogram trophy symbolize the six teams that play the competition among themselves. On the outer edge grouped around the rock crystals are the names and club crests of the winning teams, as well as the logo of the Bundesliga .