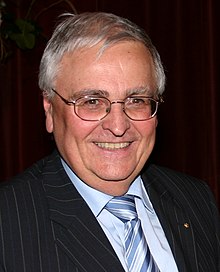 Theo Zwanziger attended the Tilemann School in Limburg an der Lahn and passed his Abitur there in 1965. In the same year he began training as a tax inspector (University of Finances Edenkoben), which was followed by studying law and legal clerkship. From 1976 to 1980 he was employed in the administration of the Westerwaldkreis in Montabaur and received his doctorate in 1978 at the University of Mainz with a thesis in tax and constitutional law. jur. PhD. Then Zwanziger was active as an administrative judge from 1980 to 1985. In the following years he was a member of the Rhineland-Palatinate state parliament as a CDU member until 1987 . From 1987 to 1991 he acted as district president of the then Rhineland-Palatinate district of Koblenz and finally as an administrative judge at the tax senate of the Koblenz Higher Administrative Court. In 1991, Zwanziger founded a law firm in Jena and later a second in Altendiez. The law firm Dr. Theo Zwanziger & Collegen is based in Hermsdorf and Gera in Thuringia .

Theo Zwanziger is married and has two sons. He is evangelical. Zwanziger's son Ralf is manager for women's football at TSG 1899 Hoffenheim . On June 19, 2011, he was seen in a cameo at Tatort Im Abseits .

Career as a football official

Until 1975 he played himself for VfL Altendiez and was then a member of the board of the small club to which he still belongs today. Further stations were the chairmanship of the Rhineland Football Association and, from 1992, the DFB board, where he held the post of treasurer between 2001 and 2004 . Within the organizing committee for the 2006 World Cup , Zwanziger has been Vice President of Finance, Human Resources and Legal Affairs since 2003; He was also an ambassador for the 2006 World Cup for people with disabilities in Germany.

On July 6, 2004, he declared that he would run against Gerhard Mayer-Vorfelder in the next election as chairman of the DFB . In order to prevent a fight vote two years before the World Cup, an agreement was reached on July 9, 2004 on a double leadership, which was decided on October 23, 2004 at the 38th DFB Bundestag in Osnabrück . Mayer-Vorfelder was elected there as president and Zwanziger as executive president; the areas of responsibility were divided between the two. Even before the election, Mayer-Vorfelder agreed internally not to run again at an extraordinary DFB Bundestag in 2006. On September 8, 2006, Zwanziger was unanimously elected (sole) president. On December 2, 2011, he announced that he would step down from this post in October 2012, as he did not want to run again in 2013. Ultimately, on March 2, 2012, he handed over the official duties to Wolfgang Niersbach . Zwanziger himself had spoken out in favor of Erwin Staudt as his successor.

A legal dispute between Zwanzigers and sports journalist Jens Weinreich caused a stir in 2008 and 2009 , from whom Zwanziger demanded a declaration of cease and desist due to the description of an “unbelievable demagogue”. He was defeated in five courts against Weinreich before the opponents reached an out of court settlement. In 2010, Zwanziger founded the “Theo Zwanziger Foundation”, which is dedicated to promoting sport, in particular to promoting girls' and women's football. As an ambassador, Theo Zwanziger supports the Respekt! No place for racism . He is an avowed fan of Borussia Mönchengladbach .

Zwanziger was a member of the FIFA Executive Committee from 2011 to 2015 .

In June 2015, he made headlines as a critic of the award of the 2022 World Cup to Qatar . He described Qatar as the "cancer of world football". In April 2016, the Düsseldorf Regional Court dismissed a corresponding lawsuit on the grounds that its designation fell under freedom of expression . In the affair surrounding the award of the 2006 soccer World Cup for a black box office , he accused his successor in office at the head of the DFB, Wolfgang Niersbach, of lying.

On November 3, 2015, the Frankfurt am Main public prosecutor announced that it was investigating Zwanziger on suspicion of tax evasion. In 2007, Zwanziger, as DFB President, signed the tax return for the 2006 World Cup, in which participation in the cultural program was listed as operating expenses. In May 2018, prosecutors brought charges against Zwanziger. However, in October 2018 the Frankfurt Regional Court rejected the opening of main proceedings for tax evasion against the two former DFB Presidents Theo Zwanziger and Wolfgang Niersbach as well as the former DFB General Secretary Horst R. Schmidt. In July 2019, he returned the two Federal Merit Crosses that Zwanziger had received in 2005 and 2012 to Federal President Frank-Walter Steinmeier on the grounds that he did not want to be honored by a state whose Hessian officials in the tax investigation department and the In his opinion, the public prosecutor's office confused dutiful administration with uncontrolled zeal for persecution.

The Swiss Federal Prosecutor's Office has initiated a criminal case against twenties on suspicion of fraud, dishonesty, money laundering and embezzlement on 6 November 2015 and finally in August 2019 indictment of the former DFB officials Horst R. Schmidt , Theo Zwanziger and Wolfgang Niersbach and the Swiss Urs Linsi charged. Commenting on the indictment, Theo Zwanziger said:

“This entire Swiss campaign is desolate, vicious and will fail completely because I have nothing to blame myself for. These incompetent investigators rush their heads against a wall - in the end the wall always wins. The whole thing has long been a judicial scandal and no really accusable behavior towards the accused. "

The defendants' lawyers requested the suspension or suspension of the trial due to the COVID-19 pandemic , among other things , but the court denied this on March 5, 2020. A first instance judgment had to be passed by the end of April 2020 in order to avoid the statute of limitations. On March 17, 2020, the process was suspended by the Federal Criminal Court and the statute of limitations entered into effect on April 27.

During his time as chairman of the German Football Association, Zwanziger was honored with various awards:

District President in the Koblenz district

President of the German Football Association