The Düsseldorf Regional Court is a court of the ordinary jurisdiction of the state of North Rhine-Westphalia .

The regional court (LG) has its seat in Düsseldorf . The judicial district is located in the west of North Rhine-Westphalia.

The Düsseldorf Regional Court, together with the Düsseldorf Local Court , has been housed in a new building built in 2009 at Werdener Strasse 1 in the Oberbilk district since March 2010 . The gross floor area is around 62,000 m². Until then, both courts were located in three historical buildings, some of which were connected, in Düsseldorf's old town on Mühlenstrasse. 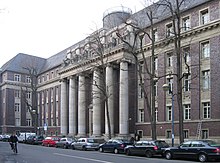 Former building of the Düsseldorf Regional Court on Königplatz (built in 1859, inaugurated in 1871)

The Düsseldorf Regional Court has existed under this name since 1820. The French judicial organization continued to apply in the Prussian Rhine Province at that time . The Cologne Court of Appeal had the function of the Court of Appeal there . The courts subordinate to him were not called district courts , but regional courts. The following civil courts were subordinate to the Düsseldorf Regional Court as courts of first instance:

In addition, the following peace courts were added in 1820, but in 1834 they were assigned to the then newly founded district court of Elberfeld :

With the introduction of the Reich Justice Laws , the Düsseldorf Regional Court remained in existence. The peace courts were dissolved and replaced by district courts, including the district court of Düsseldorf .

In 1871 the district court building on Königplatz (today Martin-Luther-Platz) was inaugurated. Today the headquarters of the Ministry of Justice are located here . In 1913 construction began on the current justice building on Mühlenstrasse. After a resolution of the provincial administration passed in November of the war year 1915, the modestly planned building was considerably expanded. This was particularly evident in the monumental entrance area. The outer walls have been faced with Rhenish clinker bricks in the colors light red to blackish purple. Like the cornices and parapets, the huge pillars on the front are made of Kirchheim shell limestone . Six figures about three meters high are enthroned above the entrance portal. They symbolize the classical and Christian virtues, but not the virtue of justice. This can be found in the building itself in the form of the gilded head of Justitia above the gateway to the main staircase. The second floor of the front ends with the heads of “legal scholars and wise men of antiquity”.

The Düsseldorf Regional Court enjoyed international attention from 1975 to 1981 when the third Majdanek trial was being heard there. From the end of October to the end of November 2006, the new version of the Mannesmann trial took place, which ended with a multi-million dollar investment. The Federal Court of Justice had previously overturned the acquittals of all defendants on appeal by the public prosecutor.