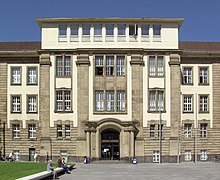 The district court of Duisburg belongs to the ordinary jurisdiction of the German state of North Rhine-Westphalia . With him are chambers for commercial matters set. Furthermore, a reparation office and a reparation chamber have been set up, both of which are responsible for the entire state.

The district court has its seat in Duisburg . The judicial district includes the cities of Duisburg, Oberhausen , Mülheim an der Ruhr , Dinslaken , Voerde and Wesel, as well as the communities of Schermbeck , Hünxe and Hamminkeln, in the west of North Rhine-Westphalia and the Ruhr area . Approximately 1.1 million court residents live in the district .

The building complex was built in three sections. In 1874–1876 the first building with the front facing Königstrasse was erected. In 1878 there was an extension on Landgerichtstrasse. The wing on König-Heinrich-Platz was built between 1909 and 1912.