The title of this article is ambiguous. For the former municipality of Schermbeck in Lower Saxony, see Luhden .

The municipality of Schermbeck is located between the Lower Rhine region and the Westphalian Münsterland in the north-west of North Rhine-Westphalia . The municipality in the Wesel district belongs to the Düsseldorf administrative region and is a member of the Euregio Rhine-Waal .

The community of Schermbeck is about 8 km from Dorsten and 18 km from Wesel and 17 km each from Dinslaken and Bottrop. The entire municipal area is part of the Hohe Mark-Westmünsterland nature park , which includes the Loosen Berge , Dämmer Wald and Lichtenhagen nature reserves in the west , and the Üfter Mark as part of the August forest area in the east . Both the Lippe and the Wesel-Datteln Canal cross the municipality for around 4 km of their course.

The community of Schermbeck has a total area of ​​110.74 km². Its maximum north-south extension is 12.90 km, from west to east 17.80 km. It is divided into the eight districts of Altschermbeck , Bricht , Damm , Dämmerwald , Gahlen , Overbeck , Schermbeck and Weselerwald .

Remains of the city wall 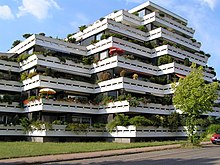 The name "Scirenbeke" as the origin of today's place name appeared for the first time in documents from 799 . In it, Liudger assigned the farms “Scirenbeke” and “Ruscethe” (from which the name of the current district of Rüsten developed) to the Werden monastery . Liudger is also believed to be the builder of the church in Altschermbeck.

With the Treaty of Verdun in 843, the area around the later Schermbeck became part of the Lotharii Regnum under Emperor Lothar I , while the later Altschermbeck fell to Eastern Franconia under King Ludwig . In the year 900 the district of Gahlen was first documented as "Galnon", whereby it was also a donation to the Werden monastery. The documentary mention of the other districts followed in the centuries that followed, for example, in the oldest surviving book of the dead of the Xantener Viktorstift "Damme" (today's district Damm) was mentioned. The farm "Wisele" (today Weselerwald) was first mentioned in a document from 1122. The first written reference to Bricht comes from the year 1163. A parish was first mentioned in 1184 , which was probably established by the Werden monastery.

In the beginning of the 13th century, Schermbeck benefited above all from the trade route leading through the village. Schermbeck Castle was first mentioned in 1319, followed by the parish of Schermbeck in 1372 and Gahlen as a parish in 1380. At the beginning of the 15th century, the city fortifications with two gates and eight towers were built and completed around 1416. In the following year Schermbeck was first mentioned in a document as a city, whereby the granting of city ​​rights must have already taken place. In 1417, the Schermbeck chapel community was separated from the previous Drevenack parish and raised to the status of an independent parish.

After the Duchy of Kleve had granted religious affiliation, the communities in Schermbeck and Gahlen converted to Lutheranism between 1550 and 1580 . The division of Schermbeck, which has existed since 843 , was first documented in 1559 in the name “Olden-Schermbeck” in contrast to “Neu-Schermbeck”.

As a result of the Jülich-Klevischen succession dispute , Schermbeck came to Brandenburg-Prussia and was occupied by Spanish troops in 1615 during the Eighty Years' War . A troubled time followed: in 1631 the plague broke out, in 1636 Hessian troops camped in the Damm district during the Thirty Years War . According to reports, they " lodged themselves in and lied there for about five days, during which time they ruined everything ". In 1636, Schermbeck was occupied by imperial troops until large parts of it burned down again on June 28, 1640. In 1643 the office, castle and town of Schermbeck were pledged to Alexander Freiherr von Velen for 50,000 Reichstaler and only redeemed 20 years later. The castle went into private ownership in 1662.

On October 9, 1685, the citizens of Schermbeck celebrated the inauguration of the first Reformed church on Mittelstrasse, which was destroyed in the fourth city fire in 1742 (like around 30 percent of the houses), caused by Hanoverian troops billeted in Schermbeck during the First Silesian War . The destroyed church was replaced by a chapel. As early as 1718, the walls and towers of the old city fortifications had been partially removed.

The modern history of Schermbeck began with an economic upswing, mainly due to the manufacture and sale of cloth . In 1800 there were 56 spinning and weaving mills .

In 1830, the Lutheran and Reformed congregations united in Schermbeck. At the same time, the Catholics Schermbeck, Bricht and Overbeck were parished to Altschermbeck, where on October 19, 1841 a new Catholic church was consecrated. In 1858 Wilhelm Schoel and E. Fischer built the first mechanical brickworks in Schermbeck, the successor of which still exists today in the form of the Nelskamp roof tile works . In 1870 the local hospital was put into operation.

In 1874 the first section of the Haltern-Venloer Bahn , which was completed in the same year, was opened with the section from Haltern via Schermbeck to Wesel . The Deutsche Bundesbahn gave up passenger traffic on the route in September 1962. From 1974 Schermbeck was the western end point from the direction of Haltern, in 1985 the station was also given up. Thirteen years later, 19 "colonists" initially founded the Lühlerheim workers' colony in the Weselerwald district, before Schermbeck experienced a renewed economic boom at the end of the 19th century thanks to the flourishing pottery . Between 25 and 30 master potters worked in Schermbeck during this time, and their goods were mainly sold in the nearby Ruhr area . In the period that followed, a new office building (today the Old Town Hall ) was built in 1910 and today's Ludgerus Church in Altschermbeck was inaugurated in 1915.

During the Second World War , especially on March 23, 1945, Schermbeck was the target of Allied bombing attacks, in which 70 percent of the town center was destroyed.

History of Schermbeck after 1945

In 1965 the office of Schermbeck joined the Hohe Mark-Westmünsterland Nature Park, which was founded in 1963 . The indoor pool opened in 1978 and the local history museum in 1987. In the same year the Marien Hospital was converted into a nursing home for the elderly. On October 30, 1993, the new town hall with a meeting center was officially opened. In 1999 Schermbeck celebrated its 1,200th anniversary.

Since then Schermbeck has been a municipality in the Wesel district.

According to the 2011 census , 43.9% of the population in 2011 were predominantly Roman Catholic , 36.9% Protestant, and 19.2% were non-denominational , belonged to another religious community or did not provide any information. Historically, Schermbeck is more Catholic (Diocese of Münster) than Protestant.

The presence of Jews in Schermbeck was first recorded in 1676 . During the time of Prussian rule, a special right was introduced for Jews, in which they were issued letters of protection providing evidence of a certain amount of assets. Jews worked as cattle dealers and butchers . In 1810 the small Jewish community built its own synagogue . There was also a mikveh and a Jewish cemetery. From 1820 the Jewish population increased. In 1855 there were 97 people of Jewish faith in the village, around 10% of the population. Thereafter the number decreased continuously until 1927 only 13 Jews were counted. On the night of the pogrom of November 9, 1938, the synagogue was not burned down because of the feared fire risk for the outbuildings, but its interior was devastated and furnishings were thrown into the garden behind the church, where they were burned the next day. While some families were able to save themselves in time by emigrating , other Jewish families found death in various concentration camps . Since 1982 a memorial plaque commemorates the synagogue that was destroyed in 1938.

Mayor of the municipality of Schermbeck since the abolition of dual leadership in North Rhine-Westphalia:

The municipal coat of arms has its origins in the time of Schermbeck's elevation between 1410 and 1417. The oldest known seal of the city at that time bears the inscription " sigillum opidi schirenbecke " (German: seal of the city of Schermbeck) in a document dated May 15, 1500 . The silver heart shield and the lily reels and bars are taken from the coat of arms of the Counts and Dukes of Kleve due to the former territorial affiliation of the former city of Schermbeck to the Duchy of Kleve. The three wavy bars in the lower part of the coat of arms indicate the place name adopted by the Grenzbach, now known as Mühlenbach, “ Scirenbeke ”. Furthermore, the wave beams symbolize the Issel , the Lippe and the brooks as geographically connecting elements of the municipalities that were previously independent in the Schermbeck office.

The municipal coat of arms was approved by the district president in Düsseldorf with a certificate dated December 21, 1977.

Schermbeck had a train station on the Haltern - Wesel - Venlo line from 1874 to 1985 . There have been no passenger trains here since 1962. Freight trains continued to Wesel via Drevenack until 1974 . The empty station building was destroyed by arson in 1978 and then demolished. In 1985, the Deutsche Bundesbahn also shut down the eastward section of the route from Schermbeck to Hervest-Dorsten .

The tariff of the Verkehrsverbund Rhein-Ruhr (VRR) applies and the NRW tariff applies to all tariff areas .

The football department of SV Schermbeck , the largest Schermbeck sports club, was promoted to the Oberliga Westfalen in 2003 ; in which the 1st team took 6th place in 2018/19.

The formation "The dancing rebels" of the dance club Grün-Weiß Schermbeck has been dancing in the first division of jazz and modern dance since 2013 .

The 1st men's team of the handball department of SV Schermbeck achieved promotion to the regional league in 2007. In 2008 he was promoted to the association league.

The Weselerwald Golf Club has existed since 1988 and has around 750 members. The golf course includes an 18-hole tournament course and a 9-hole short course .

The TC Altschermbeck tennis club was founded in 1970. It provides 7 ash places for a good 132 members.

Other personalities who worked in Schermbeck

“In a shallow basin on the Lower Rhine, between wooded and heathery heights, there is a village whose signature is a short, clunky brick church tower and whose main street is called Mittelstraße, which is accompanied on both sides by Kaffeestraße and Kirchstraße and is connected to them through several little streets, the official names of which can only be heard in the local history lessons at the school; later they are forgotten and the streets are named after some sort of prominent local resident.
The residents, however, tend a little towards cretinism and have a peculiar malicious and biting joke ahead of their neighbors - otherwise they live their day like them and know nothing of the transcendent ideality of time, the negation of the will, the pathos of distance and would be as happy as their cattle, if they didn't have the malicious joke and were so inveterate in the image of their god. "

Cities and communities in the Wesel district