This article deals with the Borken district from 1975 until today; for the predecessor group of the same name, see Borken District (1816–1974) .

The district of Borken is a regional authority in Westmünsterland and is located on the Lower Rhine Plain in the north-west of North Rhine-Westphalia . It was created on January 1, 1975 in the course of the district reform through the Münster / Hamm Act , belongs to the Münster administrative district and is a member of the Westphalia-Lippe Regional Association . The seat of the district is the city of Borken . The largest city in the Borken district is Bocholt .

The district of Borken in Westmünsterland has a 108 km long border with the Netherlands in the west . The maximum north-south extension is 57 km, the maximum west-east extension is 61 km. The highest point is a foothills of the Baumberge called Schöppinger Berg at 154 m above sea level. At 14 m above sea level, the Issel valley near Anholt is the lowest point in the district. 42.8% of the area of ​​the district of Borken (608.4 km²) is designated as a landscape protection area, 48.4 km² is a nature reserve . 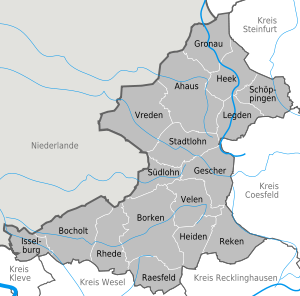 The district of Borken borders clockwise to the north, beginning with the Lower Saxony district of Grafschaft Bentheim (2 km) and the districts of Steinfurt (33 km), Coesfeld (51 km), Recklinghausen (29 km), Wesel (45 km) and Kleve (10 km). In the north-west it borders over 108 km on the Dutch provinces of Gelderland and Overijssel .

In the course of the municipal reorganization , the previous districts of Ahaus and Borken were dissolved on December 31, 1974 and together with the independent city of Bocholt , the district city of Isselburg (formerly Rees district ) and the communities of Erle (formerly Recklinghausen district ) and Gescher (formerly Coesfeld district ) merged with effect from January 1, 1975 to form the new Borken district. The municipality of Dingden , which had previously belonged to the old district of Borken, was attached to the newly formed municipality of Hamminkeln in the new district of Wesel .

In 1975 the district of Borken consisted of nine towns and eight municipalities. In 2012 the municipality of Velen was elevated to a city.

Population development in the Borken district from 1975 to 2015

Since the 2014 local elections, representatives from seven parties and two groups of voters have been represented in the district council of Borken . The CDU holds the majority of the mandates.

Currently there is the following distribution of seats according to parliamentary groups in the district council (as of September 2014):

In the past election periods, the district council was composed as follows:

Coat of arms, banner and flag

The coat of arms of the old district of Borken, which was approved on May 10, 1955, lost its validity when the district was re-established. Therefore a competition was organized in 1975, the result of which, however, was not well received. The heraldist Waldemar Mallek was commissioned to revise an old draft from him.

The Borken district museum is located in Vreden . Until the end of 2014 it was called the Hamaland Museum . After extensive renovations as part of the Regionale 2016 , it was reopened in 2017 under the new name kult - Culture and Lively Tradition Westmünsterland . It is the largest cultural history museum in western Münsterland. The previous permanent exhibition showed exhibits on the history of the region, on church history, on nature and handicrafts, handicrafts and housekeeping. The outstanding exhibit is the Sixtus chasuble , a sacred garment from the 7th century. The chasuble is one of the oldest preserved textiles in Germany. The museum also regularly shows special exhibitions and offers an extensive museum educational program. From April to October a historical courtyard complex consisting of ten buildings can be visited, which is located about 200 m away in the city park of Vreden.

In 2005 the Borken district was the location and host of the Sculpture Biennale Münsterland .

Private and business flyers can use the Stadtlohn-Vreden airfield . Borken-Hoxfeld airfield is also available to glider pilots and powered aircraft .

The Borken district is accessed by five railway lines:

The district of Borken is accessed by two federal motorways and six federal highways:

In the 2016 Future Atlas , the Borken district was ranked 198th out of 402 districts, municipal associations and urban districts in Germany, making it one of the regions with a “balanced risk-opportunity mix” for the future.

The textile industry, with large spinning mills, weaving mills and sewing mills, had a major impact on industrialization in today's district. The textile museum in Bocholt reminds of this.

Today, it is mainly small and medium-sized companies and craft businesses that shape the economy in rural Westmünsterland. The central location between the Dutch Achterhoek , the Westphalian Münster and the Ruhr area offers great potential . As a result, various logistics companies have discovered the location for themselves. In the cities of Ahaus, Stadtlohn and Vreden, the graphics and printing industries are of noteworthy importance. In the area of ​​furniture production and sales, the Hülsta company based in Stadtlohn should be mentioned. The numerous farms and the many companies directly and indirectly associated with agriculture also support the economic strength of the district. The economic development of the district of Borken was honored in the competition Grand Prize for medium-sized companies in 2006 as “Municipality of the Year”, in 2012 as “Premier Municipality” and in 2018 with the “Premier Honor Plaque”.

International companies are also represented in the circle. Gigaset Communications operates a factory in Bocholt for the production of cordless telephones and Flender GmbH (formerly "A. Friedr. Flender AG") (now part of the Siemens group ) is the world market leader in drive technology. The Urenco Group operates Germany's only uranium enrichment plant in Gronau .

The largest contiguous industrial area in North Rhine-Westphalia is the Bocholt industrial park with more than 200 companies and over 6,000 employees.

A department of the Westphalian University of Applied Sciences Gelsenkirchen Bocholt Recklinghausen is located in Bocholt . The following courses can be found in the modern campus building on Münsterstrasse: information technology, international management, mechatronics, economics, industrial engineering and business informatics. The bionics course has also been offered since the 2010/11 winter semester.

The State Music Academy of North Rhine-Westphalia is located in Heek- Nienborg as the state central institution for musical training, further education and training. With courses, seminars, conferences, concerts and projects, it is aimed at amateur musicians, music educators from all areas, young musicians and those interested.

Wikisource: Statistical representation of the district of Borken  - sources and full texts

Cities and municipalities in the Borken district