This article describes the Baumberge in Münsterland; for the sand dune landscape of the same name in Berlin see Baumberge (Berlin) .
p1

Landscape in the tree mountains

The Baumberge in the North Rhine-Westphalian district of Coesfeld - located between the independent city of Münster and Coesfeld as the district town of the district of the same name - are 188.7  m above sea level. NHN the highest mountain range in the Münsterland .

The hilly landscape is characterized by a number of geological , hydrographic and architectural features . It has various types of protected areas .

The name Baumberge goes back to the term Bomberg , which in turn is a fusion of the old German word bo , synonymous with house / yard , and the deity Odin .

The Baumberge are located in the Kernmünsterland between the cities of Münster in the east and Coesfeld in the west. They are divided into the Bomberge , the Osterwicker Platte , the Coesfeld-Daruper Heights and the Schöppinger Ridge . The Altenberger Ridge to the northeast , which is no longer counted among the tree mountains , is set apart from them by the Hohenholter Depression . Centrally in the Baumberge, where Bomberge, Osterwicker Platte and Coesfeld-Daruper Heights meet, is the Billerbeck resort in a very central location in the Berkel Valley .

The Bomberge between Billerbeck, Havixbeck , Nottuln and Horstmar are a flat undulating high plateau in which with Westerberg ( 188.7  m ), Bomberg ( 182.3  m ), Billerbecker Berg ( 172.1  m ), Luseberg ( 183.9  m ) and Hoheberg ( 181.8  m ) the highest heights of the mountain range can be reached. The latter two are located in the south-west of Havixbeck against Tilbeck pulling Stever mountains .

Beyond the connecting road Nottuln – Billerbeck ( Landesstrasse  577), the height up to 165.2 m (elevation west of the farmstead ) is only vaguely  separated by a saddle at 131.4  m (street point north-northwest of the fish ponds at the Nonnenbach near the Schulze Bisping homestead) Frieling ) high Coesfeld-Daruper heights as the southwest foothills of the southern part. Towards Coesfeld, the Coesfelder Berg moves , which reaches a height of 152  m on the Ludgerirast above the Gerleve monastery .

To the north, the Bomberg Mountains are joined by the Schöppinger Ridge, which, after flattening at a little more than 100  m, reaches a height of 157.6  m with the Schöppinger Berg .

In terms of area, the Osterwicker Platte in the west is the largest of the four sub-units of the Baumberge. It reaches a height of 128.4  m south of Osterwick and drops to the northwest. It is separated from the Schöppinger Berg by the Vechte , from the Coesfeld-Daruper heights by the valley of the Berkel.

The tree mountains and their immediate foothills are naturally assigned as follows - with heights in meters above mean sea ​​level:

The surveys of the tree mountains and their foothills (*) include - sorted by height in meters above sea ​​level (NHN):

Within the framework of the Baumberge watershed, the Baumberge form a kind of wedge, especially between the rivers of the Rhine and Ems . Due to their proximity to the sea , the ridge has a share in the catchment areas of some rivers . The Hagenbach and the Stever , which rises there and flows south, are tributaries of the Lippe , which in turn belongs to the Rhine. The Münstersche Aa flowing to the east is part of the Ems electricity system. The Vechte , which rises near Darfeld at the foot of the Baumberge and flows north-west into the Netherlands , forms its own small current system with the Dinkel . The westward flowing Berkel has its confluence with the Dutch IJssel .

The subsoil of the Baumberge consists of sand-lime brick, which is well permeable to water. As a result, the rainwater on the plateau seeps into great depths. For centuries, the existing farms had to get their drinking water from 40 m to 50 m deep wells - more often, however, was the supply from rainwater cisterns - before they were connected to a drinking water pipe in the early 1970s. The rainwater that has seeped away then emerges at the edges of the tree mountains in spring horizons , whereby entire streams can emerge within a few meters. Well-known examples of high spring discharges are Schwarthoffs Quelle and the Leerbachquelle near Leer (Horstmar) on Schöppinger Berg. Some other characteristics of a karst mountain range such as stream shrinkage and sinkholes can also be found in the tree mountains . 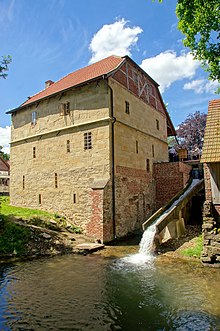 The subsoil of the Baumberge is formed by a sandstone , which is very popular in construction , which is bound with lime . This material is pale yellow in color, is very easy to work with and defines the image of the cities in the whole area.

For example, the St. Paulus Cathedral and the town hall of Münster are built entirely from this stone material. Other prominent examples of the use of this building material is the provost Church of St. Ludger in Billerbeck , the interiors of between Billerbeck and Coesfeld located Gerleve Abbey and the Baumberge Club maintained Longinusturm on the Westerberg. Baumberger sandstone was already very popular as a material for sculpting work in the Middle Ages , figures made of this stone from this period can be found throughout the Hanseatic region , examples include Lübeck and Riga .

Parts of the Baumberger sandstone are very soft and very sensitive to environmental influences such as acid rain and other air pollution, which has led to this stone's reputation as a building material. However, the position in which the material is installed is decisive for the susceptibility of the stone to weathering : workpieces that are installed in the same position as the raw material was removed from the quarry are significantly more resistant. In contrast, material placed on a gap weathers very quickly; this basic rule was not adhered to, especially in the new buildings of the 19th century, so that there is an increased need for repairs here in particular . The local stonemasons currently deliver a large number of workpieces that have to be replaced because of this damage.

The Baumberger Sandstone Museum in Havixbeck documents the geology and history of natural stone quarrying in the tree mountains as well as the stonemasonry and stone carving trade in the region .

The Baumberge tower over the otherwise flat landscape by up to 100 m and reach a height of 187.6  m on the Westerberg ; its summit is crowned by the Longinusturm . Characteristic for this landscape is a relatively flat and forest-free plateau with steep and, from a certain height, wooded edges. The plateau is without closed settlement because of its lack of water .

The sitters on the Coesfelder Berg

In the area of ​​the Coesfelder Berg east of Coesfeld lies the Sitter , an area of ​​partly wooded, steep dry valleys that formed in the last Ice Age. Etymologically, the word sitter is derived from the pagan deity Ziu ; Ziutir means "honor of the Ziu".

In the part of the Baumberge, which extends between Schapdetten , Tilbeck , Nottuln and Havixbeck , there is an extensive Landwehr facility, the Tilbecker Landwehr . This form of border fortification, which dates back to the Middle Ages, consists of two parallel ramparts that stretch several kilometers through the mountains of trees.

The Grinkenschmied sits in Detter Berg near Schapdetten and forges plow irons, shod the horses, does all the blacksmithing, but receives no payment for it, only a roast; especially for this wage you lend your skewer at weddings. That happened once, and when the wedding is over, the farmer sends his servant back to Grinkenschmied with a spit and roast; But the servant eats the roast on the way, and when Grinkenschmied says: "Dat's min spitt, aver where is min braden?" the servant freshly replies: "Da wett ik nist van." Was di, ik sall minen braden wull kregen. ”When the servant who was on horseback heard this, he hurried off; but when he got home his horse had ripped a large chunk out of the heap; that was Grinkenschmied's roast.

The A 43 leads south past the Baumberge at a minimum of 2 km (south of Schapdetten) and the A 1 to the east at 8 km . The northern part of the ridge is separated by the Baumberbahn as a railway line . The landscape can be hiked through on forest paths and paths as well as on dirt roads.

The Baumberge-Verein (BBV) was founded in 1896 and is based in Münster . Its first chairman was Friedrich Westhoff . It signs and maintains hiking trails, including the Baumberger Ludgerusweg , the Hollandgängerweg and the Westfälische-Friede-Weg . In addition, the association maintains seven circular hiking trails starting at the Longinusturm with a total length of 53 km and 58 local circular hiking trails with a total length of 605 km. The association publishes hiking maps and literature about the Baumberge.