The Longinusturm is a 32 meter high observation tower on the Westerberg ( 188.7  m above sea level.  NHN ), the highest point of the NRW Westmünsterland located tree mountains . It is not far from Baumberg, a farming community in the Nottuln municipality in the Coesfeld district .

The tower was built by the Baumberge Association between 1897 and 1901. Baumberger sand-lime brick , which is still quarried in nearby quarries, was used as building material . The tower offers a view of the Baumberge and the Westphalian Bay, for example .

The Longinusturm served military purposes from 1944 to 1945, the last two years of the Second World War . It was confiscated on the basis of the Reich Services Act. Positioning devices ( radar ) for the early detection of approaching enemy air force units and formations were installed on the observation platform at a height of 24 m . The command was the Luftwaffe-Nachrichten-Regiment 2 in Münster-Gremmendorf . With the advance of the Americans and the occupation of the Baumberge, the tower on the northwest corner received an artillery hit.

Badge for the first television reception 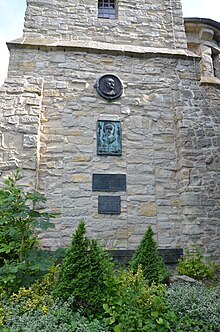 Plaques at the base of the tower

At the beginning of the 1950s, the Longinusturm for the telecommunications system was supplemented by an architecturally unsuitable structure with an integrated viewing platform and antenna systems. In 1952, master television technician Reinhold Holtstiege presented television to the public for the first time in West Germany on the tower . Since the tower had no power connection at the time, the device was powered by a converter that was fed by a car battery. The regular broadcasting of radio and television programs later did not take place from the Longinusturm itself, but from the Nottuln station in the immediate vicinity . The program modulation was transmitted by cable from the radio station in Cologne to Münster and received from there via a provisional directional radio link with antennas on a wooden frame on the Longinus Tower, from where it was again transmitted via cable to the VHF transmitter a few hundred meters away. The radio link was later replaced by a telephone cable.

On the evening of January 18, 1979, right-wing criminals carried out an explosive attack on the Longinus Tower to prevent the four-part American television film Holocaust - The History of the Weiss Family from being broadcast on the third television program . Peter Naumann , right-wing terrorist and now a politician of the NPD , and two accomplices detonated two explosive devices on the Longinusturm and on the radio mast of the station in Koblenz while the introductory documentary Endlösung was being broadcast . There was considerable material damage to the equipment of the Longinus Tower used by the Deutsche Bundespost with telecommunications equipment. The attack had no effect on the television program at the Nottuln location, as no programs were broadcast from here; Nationwide, however, around a hundred thousand televisions were affected by a program failure at the station in Koblenz. The bomb attack is considered to be one of the first right-wing terrorist actions in post-war Germany .

In 1991 the Longinusturm was entered in Nottuln's list of monuments and in 1992 a wind measuring system was attached to the tower. Between 1993 and 1994 two wind turbines and a further transmission system were built in the neighborhood.

Extensive renovation work has been carried out on the tower step by step since 2007. According to the "tower warden", the cost of the renovation work between 2007 and 2014 was around 400,000 euros. The Baumberge-Verein received support from the NRW Foundation in raising the financial resources .

In addition to various telephone providers, the federal and state police also use the tower's antenna system, which rises up to 38.5 meters in height, which means that the Baumberge-Verein can generate several thousand euros in revenue every year.

The 18 | 97 Café at Longinusturm opened in spring 2016 . The Baumberge-Verein invested 180,000 euros in the necessary renovation work.

From the viewing platform of the Longinusturm, an all-round panorama opens up far beyond the tree mountains. Among other things, the following towns, regions and landmarks can be seen: