The mountains , also called Borken-Ramsdorfer Berge and mostly just mountains , in the Borken district in North Rhine-Westphalia are one to 107.4  m above sea level. NHN high mountain range and ecologically partially valuable sub- natural area of the Hohe Mark unit (with Reken peaks) in the main unit Westmünsterland .

The mountains are located about 11 km (as the crow flies ) southeast of the German - Dutch border on the northern edge of the Hohe Mark-Westmünsterland nature park flanking the Ruhr area to the north . Its hilly landscape rises between Ramsdorf in the north, Velen in the northeast, Heiden in the south and Borken and Gemen in the west. Most of the mountains , which are about 4.7 km long in east-west direction and around 2 km wide in north-south direction, are located on the bottom of the municipality of Velen. A few offshoots belong to the town of Borken and the municipality of Heiden. The federal highway 31 runs a little to the east. North of the mountains , the Bocholter Aa flows past in an east-west direction .

The mountains are the westernmost part of the Rekener Kuppen or the northwesternmost foothills of the natural spatial unit Hohe Mark (with Rekener Kuppen ) - see the local natural structure . The L 829 between Heiden (south) and Velen (north) separates them from the east-south- east adjoining Reken Mountains, which are slightly higher up to 133.4  m . 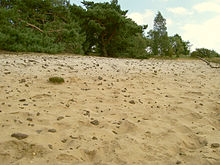 The mountains represent the westernmost part of the geological Haltern Sands , which continue in the Reken mountains to the east-southeast. Both mountain ranges were created by reversing the relief of loose material from the Upper Cretaceous and are covered with debris from the Lower Cretaceous. What is noticeable is their gentle slope to the south with the significantly more steep northern slope.

The presence of debris deposits, caking of iron, clay and small stones prevented the otherwise loose sands from being eroded by millions of years of continuous erosion . So the hills were preserved. The area is also characterized by large, well-preserved Podsol and Pseudogley Podsol deposits. These are typical soils of former commons and heather areas.

The mountains are characterized by a very varied vegetation. In addition to a wide range of tree species, there are many different grasses and shrubs.

Today the mountains are almost completely covered with coniferous and mixed forests, with species-poor pine forests , especially in the eastern area, taking up a large part of the area. The pine does not occur naturally in this region. The existence of this tree species is explained by the afforestation efforts since around 1840.

In the western part in particular, however, there are now signs of development towards dry oak-birch forests . These probably represent the typical vegetation for this natural area. Other important tree species occurring in the mountains are red beech , red oak , larch , mountain ash , spruce , alder and late bird cherry . The latter could endanger some native plant species through displacement in the future due to constant spread. 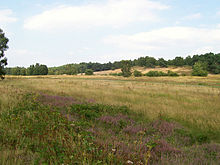 Lean lawn and heather rest on the Fliegerberg

In the past an extensive heathland with Calluna heather and juniper stretched on the hills. Today only remnants of the heather are preserved in some clearings and on the edges of the forest. In the western part of the mountains , however, valuable grassland areas have developed over time , including the largest in the Borken district with an area of ​​20  hectares (ha). The grasslands consist of, among other things, sorrel , red spörgel and field grove . Also noteworthy is the occurrence of Marsh Quendel , Marsh Horsetail and Hairy Gorse .

In addition to these, the various natural areas in the mountains also offer a habitat for a number of plants that are on the red list of endangered species. These are, for example, sand vetch , spring pörgel, dwarf feltwort, early Schmielenhafer, and farm mustard .

In addition to typical small game species, there is a large group of rare animal species in the mountains , some of which are also on the red list of endangered species.

Many of the above-mentioned plant and animal species are threatened in North Rhine-Westphalia primarily by nutrient inputs into the soil and by land destruction. In order to preserve biodiversity, two nature reserves have now been designated in the mountains .

On the one hand, there is the 208 hectare NSG "Lünsberg und Hombornquelle". This nature reserve, which is located in the western part of the mountains , protects various forest, heather and silicate dry grass areas as well as the four source islands of the Reiningbach. Particularly noteworthy in this area are the presence of rare spring inhabitants, a flat moor and typical spring meadows that have developed in an erosion valley up to 8 m deep. The forest areas consist mainly of coniferous forests and an oak-birch forest in which beeches are interspersed.

Another nature reserve is the approx. 21 hectare NSG "hill grave field near Ramsdorf" on the Hövelsberg. It is located north of the Tannenbültenberg and protects in particular acidic pine and oak forests with old wood stocks of red beech and alder. In between, a shrub layer made of buckthorn and elderberry has developed. There are also two ponds in the area, which are fed by several springs. The nature reserve got its name because of the 120 barrows from the most recent Stone Age to the older Bronze Age as well as the 5 wall tombs from the period from 1800 to 500 BC, which are within its scope.

In addition to the nature reserves, several forest areas form protected landscape components . There are also some wild meadows and a natural monument in the forests. Standing and lying dead wood can be found here and there. 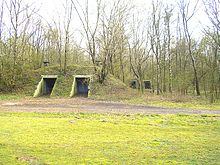 In earlier centuries there were large areas of hides and allotments on the mountains, and plague swept the heathland. From around 1840, the areas were partially reforested to ensure the supply of wood to the nearby Ruhr area . In 1931 the “ Borkener Glider Flying Group” opened a glider airfield in the hilly landscape west of the Tannenbültenberg. The Fliegerberg served as the launch site for the gliders. Since 1957 the Hendrik-de-Wynen barracks stood on a small part of the former forest area. The Bundeswehr used since the seventies, until the closure of the barracks end of 2006, an east adjacent to the barracks, about 230 hectare area, as a training area . This had a shooting range and an ammunition depot. In the meantime, a large part of this area has been converted into the 208 hectare nature reserve “Lünsberg and Hombornquelle”, including the neighboring “Hombornquelle” nature reserve. An industrial area has been created on the site of the former barracks. The eastern part of the mountains is used in particular for wood production and is therefore predominantly made up of forests. In between, some fields and wild meadows loosen up the otherwise closed forest. There has also been an elevated tank of the “Velen-Ramsdorf” waterworks on the Tannenbültenberg since 1957 . In some areas sand excavations took place in this part. South of the federal highway 67 there is a small holiday home area with a campsite.

Numerous marked hiking trails lead through the vast forests. There are also marked cycle and riding trails. These paths provide easy access to the various special features such as the hill grave field near Ramsdorf. Furthermore, in the area of ​​the former training area there are former tank roads and individual paved paths that lead to parking spaces for hikers. The mountains are crossed in a north-south direction by the county road  55, which connects the villages of Ramsdorf and Heiden. To the south part of the area is crossed by the federal highway 67 .

The elevations of the mountains include - sorted by height in meters (m) above sea ​​level (NHN):

Commons : The Mountains  - Collection of images, videos and audio files