Location of the former Dauphiné province 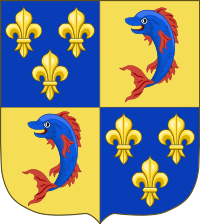 The Dauphiné [dofiˈne] (also: das Dauphiné; French: le Dauphiné, grammatically masculine ; German outdated: Delfinat ) is a historical landscape in southeast France , between the Rhone and the Italian border, south of Savoy and north of Provence . Its inhabitants are called Dauphinois ; also is the name of the dialect spoken here, which is part of the Franco-Provencal language .

The Dauphiné corresponds to the current departments of Isère , Drôme and Hautes-Alpes . The dolphin (French: dauphin ) is still the heraldic animal of these three departments.

Well-known areas are the Dauphiné Alps with the Pelvoux , which is bordered by the valleys of the Romanche , the Durance and the Drac , and their pre-Alps with the regional nature parks Vercors and Chartreuse . They are well developed for tourism, while the flatter Niederdauphiné (Bas-Dauphiné) southeast of Lyon is used more for agriculture.

The largest cities in the Dauphiné are Grenoble (as an agglomeration over 500,000 inhabitants), which on the southern edge against the Provence lying Gap and west of the Vercors the city Valence .

Description : Three golden lilies and a blue, red-rimmed dolphin in the blue and gold emblem .

The Dauphiné goes back to the Dauphiné de Viennois (Delphinat von Vienne), a largely independent feudal state that emerged between the 11th and 14th centuries and its partly French, partly Occitan-speaking territories to the Kingdom of Burgundy / Arelat and thus indirectly to the Belonged to Holy Roman Empire . Before 1044, the Archbishop of Vienne dissolved the County of Albon as a separate fiefdom from what was then County of Vienne . Grenoble became the seat of the estates of this territory . Count Guigues IV of Albon called himself Delfinus ("dolphin") for the first time in a document from 1122 and also had one in his coat of arms. His successors took over this title, which was translated into French as Dauphin . In 1219 the capital Grenoble was hit by a catastrophic flood when a natural dam on Lac de Saint-Laurent broke.

In 1349, the childless last Dauphin Humbert II , founder of the University of Grenoble , sold the Dauphiné to the French heir to the throne Charles , abdicated and became a Dominican . The treaty determined the Dauphiné to the rule of the respective heir to the throne, which in fact became part of the Kingdom of France. Hence the tradition that the respective French crown prince received the Dauphiné and thus the title " Dauphin " when he was born . In 1356 the new Dauphin Emperor Charles IV took the feudal oath. His son, the later French King Charles VI. , was appointed Imperial Vicar for the Kingdom of Burgundy in 1378. A century later, the Dauphiné was incorporated into the crown domain ( Domaine royal ) and thus de jure ceased to be part of the Roman-German Empire.

Almost all royal dauphins only carried the title pro forma, but had no particular reference to the area. The later King Ludwig XI. was the only designated heir to the throne who - during an exile from 1447 to 1456 imposed by his father Charles VII - actually resided in the Dauphiné and administered it himself. In this phase he founded the University of Valence in 1452 and in 1453 established the Parlement of the Dauphiné as a sovereign court.

The Dauphiné is one of the cradles of the French Revolution . As early as 1763 she began to revolt against royal taxes and protect her regional freedoms. In 1788 the residents of Grenoble successfully defended their parliament (court of law) on the day of the bricks against royal troops, who ordered King Louis XVI. should enforce to close all sovereign courts of justice in the kingdom and replace them with new, instructed high courts. The old French style parliament lasted until 1791, when it was dissolved without resistance by the revolution. This year the Dauphiné was divided into the three departments of Isère, Drôme and Hautes-Alpes.

During the Second World War, the German advance stopped at the Isère in 1940 , and after the armistice the Dauphiné became part of the unoccupied "free zone" of France ( zone libre ), which was largely occupied by Italian troops. When the German defeat began to appear after the fall of Stalingrad , parts of the Dauphiné, especially the inaccessible Massif des Vercors , became one of the most important bastions of the now growing resistance movement, the Resistance . In June 1944, after the Allied invasion of Normandy , voluntary paramilitary units, which were supplied with weapons and materials by the Allies from the air , tried to relocate German troops north. They were then trapped by two mountain troop divisions and wiped out in hard fighting.