Westfälische Nachrichten ( WN ) is a regional daily newspaper for the Münster area , the Münsterland and the Tecklenburger Land . It is published by Aschendorff Medien GmbH & Co. KG .

The sold circulation of the main edition Münster was 92,286 copies in 2014, the time of the last separate report to the IVW . This corresponds to a decrease of 5 percent compared to 1998. Since then, the circulation has only been reported together with the Münsterschen Zeitung . Both newspapers have been able to maintain their circulation in recent years. The number of copies sold has fallen by an average of 1.2% per year since 2014. Last year the decrease was 2.2%. It is currently 105,782 copies. The share of subscriptions in the circulation sold is 82.8 percent.

In association with the partner publishers of the Münsterland newspaper group (ZGM), the Westfälische Nachrichten is the daily newspaper with the highest circulation in the region with a circulation of 198,017 copies.

More than half of the population (56.4 percent) of over 14-year-olds reads the Westfälische Nachrichten or a title of the ZGM group every day (media analysis 2014). 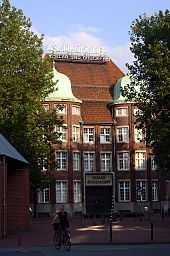 Publishing house Aschendorff, headquarters until 2008, today the seat of the book publisher

15 different local editions of the Westfälische Nachrichten are printed for the Münsterland and Tecklenburger Land. Including the partner publishers, there are 19 different booking units for advertising and insert customers.

The newspaper offers a complete range of news from politics, business, culture and sport from the region. This is supplemented by target group-specific offers such as the children's page “Yango”. The Westfälische Nachrichten also includes the leisure and events magazine “WN live”, which is enclosed with all WN issues once a month (on Fridays). In addition, the magazine is available free of charge at around 400 delivery points.

The Westfälische Nachrichten offers information on various channels (print, online, mobile). The editorship of the Westfälische Nachrichten, set up in a news desk organization, works according to the “ online first ” principle: The news portal www.wn.de, which has been available since 2007, has more than 1 million individual users and an average of more than 16 million mobile and stationary page views per month. The interplay of articles, photo series, videos and live tickers results in a multimedia regional news offer.

Since October 2012, all local editions of the Westfälische Nachrichten have also been offered in digital form as "WN ePaper". It can be used via a conventional browser and via the WN ePaper app for iOS and Android. In addition to the WN ePaper app, Westfälische Nachrichten launched the WN News apps for smartphones and tablets (also for iOS and Android) in April 2016.

Former branch of the Westfälische Nachrichten on the Prinzipalmarkt in Münster.

From 1852 to 1937 the Münsterische Anzeiger was published , which was expropriated without compensation by the Nazi rulers in 1937 at the time of National Socialism . This was the forerunner of today's Westfälische Nachrichten .

After the Second World War , the British occupation authorities granted Aschendorff Verlag the license to publish a new newspaper. The first license holders of the Westfälische Nachrichten were the former Reichstag member Franz Bornefeld-Ettmann, Gottfried Hasenkamp and the co-owner of the Aschendorff publishing house, Friedrich Leopold Hüffer.

In 1950, the Westfälische Nachrichten merged with local publishing houses in the Münsterland region to form the "Zeitungsverlagsgesellschaft Nordwestdeutschland" (ZENO), now the "Zeitungsgruppe Münsterland" (ZGM).

On August 1, 2014, it became known that the WN publisher Aschendorff also wants to take over Münster's smaller local newspaper, the Münstersche Zeitung (MZ), as part of a restructuring merger. Observers fear that the diversity of the press will decrease significantly in Münster and that the takeover of the less conservative MZ by the WN could lead to a political shift to the right in local reporting. The Federal Cartel Office exceptionally approved the takeover because the bankruptcy of the competing newspaper would also have resulted in a monopoly for WN.

All the pages ever published in the newspaper were scanned in at the beginning of the 21st century . With more than a million pages, it was the largest scanning job ever placed in Germany. Today the complete archive with 60 newspaper volumes is available in digital form.