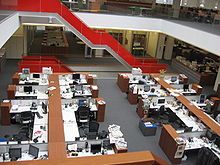 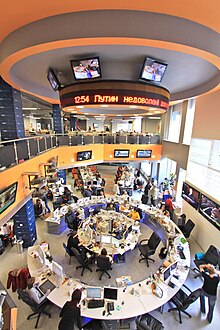 Newsdesk (English term for "news table") also newsroom , central production unit or, colloquially, bar actually designates the workstation at which current reports are received. Derived from this, it means a new form of organization in the editorial offices of newspapers , in which department heads from different departments sit at a common table and define and place the topics and news, i.e. produce the newspaper. Often several newspapers from the same publishing house and also its digital media such as websites, TV and radio news are covered by the newsroom. The journalists who write the articles are partly separate from this .

Newsrooms come from the USA . The daily newspaper The Philadelphia Inquirer said to have established one of the first in the fall 1994th

One advantage of this solution, which is being adopted by more and more newspaper editors, is better coordination between the departments. However, it restricts the independent work of the classic departments and enables greater control of work processes and contributions. A prerequisite for setting up news desks is an editorial system that enables access to all newspaper pages and digital media that are being created at any time. Such editorial systems have been introduced since the 1990s. More and more daily newspapers organize their online and print editions from a single newsroom, such as the Süddeutsche Zeitung and the Frankfurter Rundschau . In the newsroom of the Axel Springer tower block in Berlin are since 2002. The world and Welt am Sonntag and by the end of 2013, the Berliner Morgenpost and until the end of 2019. The World Compact designed by a newsroom with temporarily up to 400 employees. Around 200 people work in the Blick publications newsroom in Zurich.

One point of criticism of the newsroom concept is that it saves editorial positions. The articles come more and more frequently from freelancers and no longer from permanent reporters and local journalists . So has z. For example, on Labor Day on May 1, 2008 , the federal chairman of the German Association of Journalists, Michael Konken, sharply criticized the threat to the independent press posed by more and more temporary work in the editorial offices: "Some publishers are doing everything they can to degrade journalists to cheap wage clerks". He referred to more than a dozen newspaper publishers in Germany who, according to him, only permanently fill qualified editorial positions with temporary workers.

Editors who work on news desks also complain about the lack of space and disruptions to their work due to noise in an open-plan office .