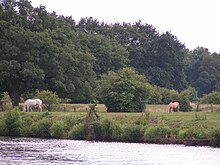 Rural cultural landscape on the Ems near Haren

The Emsland is the landscape name of a region on the middle course of the Ems in western Lower Saxony and northwestern North Rhine-Westphalia . There are different definition for the region: A wide, less common, starts from the river course and includes the present-day Lower Saxon counties Emsland and Bentheim , together as a Hanoverian Emsland called, and the North Rhine-Westphalia Steinfurt , as Westphalian Emsland referred . This definition is hardly widespread any more: the term Emsland is usually identified with the district of the same name. In particular, the inhabitants of the county of Bentheim do not feel that they belong to the Emsland. In the past, only the northern two thirds of today's district were referred to as Emsland , i.e. the areas that belonged to Niedermünster in the Old Kingdom , although the term Emsland was not accepted in this way, especially in the east, but in Emsland i. e. S. and the Hümmling was shared. Both parts of the landscape are divided by (former) bog areas, a different soil structure and (formerly) different political and social conditions. The south of today's district was called Linger Land or Niederlingen .

In the cultural and historical sense, the Emsland is characterized by an interplay of Catholic influences from Münster and Dutch influences, which are not least reflected in court and field names .

After the last Ice Age , when hunters and gatherers lived here, the region was founded around 4000 BC. Was included by the funnel cup culture in the arable farming sector of north-central Europe. From 3500 BC The megalithic systems , which have been preserved in particularly large numbers, were built here . Numerous relics have also come down from the Bronze and Iron Ages .

A Germanic settlement of the Emsland can be assumed since the 2nd millennium before the turn of the times. At the time of Emperor Augustus, Roman sources mention the Ampsivari, named after the Ems (Latin Ambesis) . After the middle of the 1st century, however, they were expelled from the neighboring Chauken to the east and can no longer be proven as an independent tribal association. Charlemagne subjugated the Emsland as part of the tribal duchy of Saxony in the Saxon Wars .

In terms of the structure of the early medieval tribal area of ​​the Saxons and the division of the Guelph Duchy of Saxony by Friedrich I. Barbarossa , the north of the Emsland, which is today in Lower Saxony, is also part of Westphalia in terms of cultural history. The Lower Rhine-Westphalian Empire then even included East Frisia. During that but always maintained his independence, the area now was the district Emsland before the time of Napoleon closely tied politically to the Prussian later became parts of Westphalia; Until 1803 it belonged essentially to the Niederstift Münster , a part of the Duchy of Münster , which also belonged to the areas south of today's Emsland district. From 1803 to 1810, most of today's Emsland district was assigned to the short-lived Duchy of Arenberg-Meppen , from 1810 to 1815 to the French Empire , from 1815 to the Kingdom of Hanover and finally from 1866 to Prussia .

During the first two decades of the empire, the Emsland districts, together with the county of Bentheim, formed the empire-wide "Meppen" constituency of the center leader Ludwig Windthorst. During this time the Emsland developed into a stronghold of the Catholic Center Party, also at the imperial level. The Center Party and its closely related press, which dominates the region, fought the NSDAP in the Weimar Republic, so that the National Socialists were only able to set up very few local groups here until 1933. The northern Emsland districts in particular were among the German districts with the lowest votes for the National Socialists.

During the National Socialist dictatorship from 1933 to 1945 the 15 so-called Emsland camps were set up: concentration camps, penal camps and prisoner of war camps. Twelve of them were in today's Emsland district, the remaining three in neighboring communities in the county of Bentheim.

After the Second World War, Polish troops occupied the region from 1945 to 1947 as part of the occupation service of the British Army . These were soldiers of the Polish government-in-exile who fled to Great Britain in autumn 1939 from the National Socialists and the Soviet occupation of Eastern Poland and who were unable to return to the now communist People's Republic of Poland after the war because of their anti-communist attitude . History had reached a political impasse. Numerous German families were resettled to make way for the 20,000 Polish soldiers and their families, the majority of whom finally left the Emsland for Canada in 1948 .

A view over the Bourtanger Moor

The Emsland is best known for its low-lying moor areas , which are largest around Papenburg . Part of the western Emsland is part of the Bourtanger Moor-Bargerveen International Nature Park .

In the region, however, there are also geest ridges . The two most important are the Hümmling north of the river Hase and the less known but somewhat higher Lingener Höhe further south. The third important river in the region besides Ems and Hase is the Sater Ems , because it is named after the old administrative center Sögel , which is called Leda in East Frisia and which flows into the Ems at Leer .

Counties and municipalities in Emsland

In Emsland is still often Low German spoken. However, this language is increasingly threatened with extinction in the larger cities such as Lingen , Meppen and Papenburg . Only in the country is the language still common language, at least in the older and partly middle generation. However, a study from 2011 shows that the younger school children only have rudimentary language skills. The Emsland lies in the transition area between two large Low German dialect groups. The dialects in the south, the Lingener Platt , are usually included in the Westphalian Platt . They belong to the subgroup of peripheral Westphalian dialects , which are characterized by the fact that the typical Westphalian refractive diphthongs were adopted for an earlier time, but were later replaced by short vowels, so that one says better instead of Westphalian bite . They are therefore now regarded as transition dialects to North Lower Saxony , like many dialects in the East Netherlands and in the northern Osnabrück region. The (actual) Emsland, which can still be divided into the North and South Emsland, and the Hümmlinger Platt are traditionally part of North Lower Saxony, but here we also find after-effects of the Westphalian vowel refraction: Many Westphalian rising diphthongs appear here as falling diphthongs, while the ( other) North Lower Saxony monophthongs. This is also the case in South Oldenburg and East Frisian. Characteristics of all dialects in the Emsland are some conspicuous conservatisms in the vocabulary, such as Paosken for “Easter” or Saterdag for “Saturday” as well as lexical adoptions from Dutch.

The Emsland was formerly known as the “poor house of Germany” because apart from the moors for peat extraction it had hardly any industries. In 1951 the German federal government decided on the so-called Emsland Plan for regional economic development , through which the infrastructure of the region was expanded and new companies settled. Existing companies received funding. Important companies and institutions are Meyer Werft , UPM Nordland Papier , Wavin GmbH, ANF ​​(Advanced Nuclear Fuels) GmbH (fuel element manufacturer, subsidiary of Areva ), the car test track , the Emsland nuclear power plant , the Transrapid test track and the Bernard Krone Holding (agricultural machinery and commercial vehicles) and since 2012 Enercon in Haren / Emmeln. For a long time, the former Krupp shooting range, now the WTD 91 military technical department , was a major employer. Since December 2004, the federal motorway 31 has been completely completed and opened for traffic. Its construction was supported - so far unique in Germany - with private donations and enables fast connections between the North Sea and the Ruhr area .

The Lower Saxony Emsland has developed from an unknown label into a leading region from a tourist perspective in recent years. In 2009, the “brand” Emsland ranked in the upper middle field at state level ( Lower Saxony ), ahead of the Weser Uplands and the Hanover region and behind East Frisia .

One reason for the increase in the number of overnight stays can be seen in the closing of the gap on the A 31 in 2004, which connects the Ruhr area with the North Sea coast .

The main focus of tourism is on cycle tourism . Investments in the expansion of tourism-relevant infrastructure such as B. the expansion of the cycle path network, which now covers around 3,000 kilometers, has paid off with the significant growth in the number of overnight stays. The variety of routes, various service offers such as luggage transfer, free GPS tracks and route planners serve the development.

The Emsland was the home and place of work of the artist Beringer Altmann , who died in 2010 and who , in his pictures and graphics, used the moor landscapes of that area as an opportunity to reflect on people and nature. 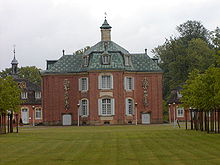 Portal: Emsland  - Overview of Wikipedia content on the subject of Emsland