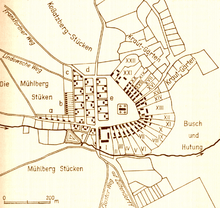 Map of Gottenheim with field names (1883)

Map with field names of the Saterland

Receipt of the field name Bavaria in 1982

A field name , in Austria, Ried name , the roll-call name (corridor designation) for a small-scale part of the landscape ( corridor ). Field names divide the area and help with orientation and identification. Field names identify the smaller and smallest geographical units, such as mountains and peaks , valleys (which also belong to the oronymika ), forests , pastures , meadows , fields and floodplains , paths , tubs , corridors.

Field names are geographical names (in Switzerland: local names ) that were coined by the local residents and often passed on in local language without written down. The name group of field names has a large variety and a versatile testimony value. The appellative vocabulary they contain is richer and more differentiated than z. B. for settlement names ( place names in the sense of the word). The field names research or Flurnamenetymologie is part of the place names Research ( toponymy ), the general preoccupation with names in the geography .

In surveying , a field name in the narrower sense refers to groups of land used for agriculture or forestry ( parcels , parcels) in the districts of the municipalities , which form a unit in their field form. This definition, based on property and community law and boundaries, differs from the original historical one, in which neither property rights nor land, community or even national boundaries are generally relevant. In the cultural landscape characterized by use, the two terms often meet (for example in the name of a special field, a piece of forest or an alpine pasture).

The field name as a common name

Field names are and were mainly common names . As a rule, they are only known within a city or village. Only by clearly identifying management (to register ), ownership ( land registers ) or land use ( usage ) to be controlled. Field names are used to clearly identify the location, i.e. the location of a parcel within the district . Here is an example from Central Hesse.

This was especially true for parcels that were subject to real division and therefore often belonged to the same owner for only one generation. If, on the other hand, the right of inheritance was exercised, the land remained undivided. Then the owner was not named and the property was only linked to the name of the farm / house.

Field names of a farm are among the most common etymological roots of family names in German. In rural areas, especially in the Alpine region and the foothills of the Alps, these farm names are still recorded in telephone books today.

Requirements for the spelling of field names on plans and maps

Large-scale field names or location names have mostly been handed down over centuries. Field names that go back to prehistory and early history are rather rare, apart from river names or names of prominent mountains. Sometimes a very old designation still shines through in the final syllables.

All historical and linguistic developments are reflected in the field names. Many small-scale field names emerged only after the abolition of the three- field economy and after the abandonment of the field and pasture management, as well as after the abolition of the common land after 1800. In the regions where real division of property was practiced, many new and additional field names were created. In particular the attributes at, on, over, under, in front of and behind indicate a division of property. If, on the other hand, the property was only passed on to one heir ( inheritance right ), additional names were not required. Therefore, there are comparatively fewer field names in these districts.

The topographical conditions are also reflected in the field names . Small-scale structured landscapes require more field names. In mountain regions, for example, where even small differences in the location of a parcel require different agricultural treatment (sowing time, mowing, etc.), there are also smaller-scale field names.

Field names can only be explained etymologically if one deals with the time of their creation. Anyone who wants to interpret more than just simple terms from the field names is usually wrong. Every field name is based on a naming motif, a characteristic that is attached to this particular location. At the time of its creation, this feature was described using the vocabulary that was common at the time. That is, the name originated from the local dialect and was handed down and passed on in this way. The meaning of the name was retained, but the vocabulary, pronunciation and spelling have changed.

When the field names were set down in writing in the 19th century ( cadastral spelling), bad mistakes were made - from the etymologist's point of view. Names were disfigured and thus became unusable for research, as they lead to nonsensical interpretations in the "spoiled German" form. In most cases, the meaning of the name for the layer of younger field names with the local dialect can still be sufficiently clarified.

On-site surveys of older farmers who are familiar with the area and who still speak the dialect are often excellent sources (see Oral History , the collection of oral traditions). This problem also includes the environment of the " Germanizations " and corresponding processes in other languages, which are based on the political conflicts of the last centuries.

Various field names or their components have, depending on the region, an Old High German , Old Low German , Romance or Slavic origin - in rare cases there are even references to Celtic linguistic material - and are therefore hardly understandable for the general public, especially since they may have diverged greatly depending on the dialects of the region .

The field names are recorded in the official maps .

The names of settlements and streets in new development areas in cities and municipalities that are being built on areas that were formerly used for agriculture are often based on the respective field names.

Other field names can also be found in the lists in the article Place Name .

For general information on place names, see the references to the article Toponomastik .