The diocese of Münster ( Latin: Dioecesis Monasteriensis ) is a non-contiguous Roman Catholic diocese in the Münsterland and on the Lower Rhine ( North Rhine-Westphalia ) and in the Oldenburger Land ( Lower Saxony ). As a suffragan, it is part of the church province of Cologne .

Today the diocese of Münster comprises:

A secular rule was connected with the bishopric of Münster until 1803, the duchy of Münster . It was divided into the Oberstift, which roughly corresponded to today's Münsterland , and the Niederstift , which corresponded to today's Oldenburger Münsterland and today's Emsland district . The area of ​​the secular diocese was larger than that of the ecclesiastical until 1666, as the Niederstift ecclesiastically belonged to the diocese of Osnabrück .

Since 1815, today's Emsland district has been part of the Osnabrück diocese again , while the Oldenburger Münsterland remained part of the Münster diocese.

The diocese of Münster is divided into three regions in North Rhine-Westphalia, which consist of a total of seven district and one city dean's offices , and in Lower Saxony into eight dean's offices , which form the official district of Vechta.

The pastoral care regions in NRW are each headed by an auxiliary bishop as a regional bishop without their own administration and jurisdiction:

Another auxiliary bishop heads the Oldenburg official district as an episcopal official and in this function has extensive autonomy from the vicariate general in Münster.

Until Auxiliary Bishop Dieter Geerlings retired in November 2017, the district deans of Coesfeld and Recklinghausen formed their own region, which was dissolved.

Institute for the History of the Diocese of Münster

Association of Catholic Adult Education in the Diocese of Münster

Youth education centers in the diocese of Münster

In addition to the regular budget, which must be accounted for, the Diocese of Münster does not have to account for the “Episcopal See” as long as no public funds are used in it. The financial assets of the Episcopal See in October 2013 were around 2.37 million euros. This does not include the real estate assets of the diocese, which are primarily used for official purposes. For the first time since its inception, the Münster diocese published its financial situation.

The budget for 2020 for the North Rhine-Westphalian part of the Münster diocese amounts to 676.9 million euros.

For 2025, the diocese expects a deficit of 32.7 million euros, after which the budget deficit will tend to grow due to demographic change . In January 2020, the diocese announced staff reductions and personnel changes in the Episcopal General Vicariate and associated offices, as well as a short-term savings and strategy process.

Kirche + Leben is the weekly church newspaper in the diocese of Münster.

The libraries in the Diocese of Münster are open to everyone - regardless of age, nationality or religion.

More than 5,300 mostly volunteer employees have a wide range of offers ready:

The St. Paulus Cathedral in Munster

The mother church is the St. Paulus Dom in the heart of Münster. It is already the third cathedral at this point. In 1225 the foundation stone was laid for today's cathedral, which was consecrated in 1264 . It was badly damaged during the Second World War. The former main portal, which was not rebuilt, was replaced by a new wall with round windows arranged in a circle. The consecration for the rebuilt cathedral took place in 1956. All important church services (e.g. ordinations) take place in the cathedral. In 1987 John Paul II prayed at the grave of the former Bishop of Münster, Clemens August Cardinal von Galen . Von Galen is buried in the cathedral's Ludgerus chapel. His grave is the focal point for many believers.

For the medieval and early modern minster in Westphalia , two developments can be noted, concerning the diocese and the city. 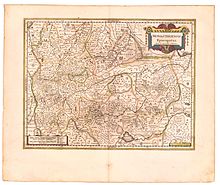 The diocese , which was ordered by Ludgerus, also called Liudger and founded by Charlemagne , initially remained at the disposal of the Liudgerid bishops Gerfried (809-839) and Altfried (839-849) , who were associated with Werden . The formation of a comprehensive parish organization up to the 10th century contrasted with noble and royal (women's) monasteries such as those in Vreden (from around 839) and Freckenhorst (from around 856). The High Middle Ages saw the Münster bishops largely on the side of German royalty.

In the turmoil of the investiture dispute (1075–1122), Münster fell victim to an attack by the Saxon Duke (and later Roman Emperor and German King) Lothar von Supplinburg (1106–1137) (1121). As reparation, Lothar's comrade Gottfried von Cappenberg , Count of Dreingau , signed over his possessions to the diocese in the following year.

In the later Middle Ages and the early modern period, the bishops became sovereigns of a territory between Ems and Hunte , of the (high and low) monastery of Münster, which also included the county of Ravensberg and with the subordination of the nobility and the formation of the three estates of Cathedral chapters , knights and cities was increasingly more firmly organized.

However, there were shocks, such as the Münster collegiate feud (1450-1457), in which two candidates and their parties faced each other in the fight for the bishopric, the introduction of the Reformation (1524) or the Anabaptist Empire of Münster (1533 / 1534-1535) demonstrate.

In the early modern period, after the Reformation and Counter-Reformation , after the Thirty Years War (1618-1648) and Westphalian Peace (1648), the bishopric of Münster as the main, fortress and garrison town center of a bishopric, a Catholic confessional state of the absolutist ruling prince bishops , under including a Christoph Bernhard von Galen (1650–1678) who took part in the campaign against Bremen-Verden in the Swedish-Brandenburg War as commander in chief or a Ferdinand II von Fürstenberg (1678–1683).

The Reichsdeputationshauptschluss (1803) then ended the existence of the episcopal state. A large part fell as the Hereditary Principality of Münster to Prussia , which took possession of its territory and capital as early as 1802. The size of the diocese remained unchanged until 1822. During the reorganization in 1822, the then Grand Duchy of Oldenburg came completely to the diocese, while the now Hanoverian shares fell to the diocese of Osnabrück . This structure is still in place today, although Oldenburg has not existed as a state since 1946.

In December 2018, local bishop Felix Genn called for the statute of limitations for sexual abuse to be abolished and for sex offenders to be punished more severely. The background was the case of a priest in the diocese who had sexually harassed adults several times and relapsed, although expert assessments had forecast the opposite.

When it comes to the role of the German bishops in National Socialism, critics criticize the fact that the complaints of the Catholic Church in Germany were always aimed at violating Catholic interests, not the National Socialist system as such. For a long time during the 1930s and during the Second World War, the German bishops had limited themselves to protesting against grievances by submitting petitions to the Reich government, as there was a protracted conflict and a leadership crisis among the bishops, as well as differing views on how to proceed. Protests by the German bishops against the judicial murders of their opponents, against the persecution of liberals, democrats and communists did not take place. There was no protest by the bishops against Hitler's attack on Austria, Czechoslovakia, Poland, Denmark, Norway, Belgium, Holland, France or the Soviet Union, nor was there a protest against pogroms against the Jews, the destruction of synagogues, the deportation and gassing of Jews.

The diocese of Münster was no exception. The then Bishop of Münster (1933–1946), Clemens August Graf von Galen, described the National Socialist government as a lawfully installed authority and supported Germany's striving for great power. Apart from the commitment of Galens against the destruction of so-called unworthy life and the disenfranchisement of Catholic institutions, numerous episcopal and ecclesiastical statements from the diocese of Münster testify to approval of Hitler and his goals. In a vademecum for the Catholic soldier , which was given the imprimatur of the episcopal ordinariate (November 8, 1938) before the war began , it says: “The Führer embodies the unity of the people and the empire. He is the supreme bearer of state power. The Christian German is bound in his conscience to obey him as such, even without an oath [...]. Is it made easy for the German soldier to pledge such loyalty to his Führer and Supreme Commander, because he recognizes in him the example of a true soldierly character and soldierly loyalty, because he gives his loyalty to a man who gives the meaning of his life in the increase of size and If he sees the honor of his people and himself sets the example of loyalty day and night, then the Christian soldier will be able to speak his vow with seriousness and joy of heart because his faith teaches him, in the person of the ruler, about the purely human abilities and Achievements in addition to recognizing and recognizing the glory and honor bestowed on him by God. ”A prayer that the Catholic clergy of the diocese had to say on the occasion of the German bombing raids on Warsaw in autumn 1939 on the instructions of Bishop Count Galen was:“ Almighty Eternal God ! We ask you to take our fatherland under your constant protection: enlighten its rulers with the light of your wisdom, so that they may recognize what is for the true welfare of the people and what is right in your power. Protect all members of our armed forces and keep them in your grace, strengthen the fighting [...]. "

On April 29, 2020, the German bishops commented on the relationship of the German Catholic bishops to the Second World War in a “word about the end of the Second World War 75 years ago” entitled “ German Bishops in World War II ”. They criticized the failure of the German bishops to protest openly against the Nazi war of extermination both when the war broke out in 1939 and afterwards, and described the behavior of their predecessors as "difficult to understand, if not wrong." The bishops continued to write in 2020: “Even against the monstrous crimes against others who were discriminated against and persecuted as 'non-racial' and persecuted, especially the Jews, hardly a voice was raised in the church in Germany.” Only after an impetus from patient murders and “ monastery storms ” had individual bishops dared open contradiction.

“Ultimately, the bishops found no way out of the tension that arose from the shared idea of ​​patriotic obligation in war, the legitimacy of state authorities, the resulting obligations of obedience and the obvious crimes. [...] By not saying a clear 'no' to the war, but rather strengthening the will to persevere in most of them, they made themselves complicit in the war. "

The following pilgrimage sites are known in the diocese of Münster:

In the diocese of Münster, the regional calendar for the German-speaking area is supplemented by the following celebrations (followed by the rank and the liturgical color ).

Dramatically declining church tax revenues and the number of Catholics as well as a shortage of priests are forcing not only to merge parishes and to form pastoral care units, but also to close churches. The buildings are used for other church purposes, possibly also converted as living space, given to other Christian denominations or demolished.