The ecumenical central cemetery in Münster , Westphalia, is the city's main cemetery. Located in the immediate vicinity of the Aasee , it offers space for around 32,000 grave sites on an area of ​​14 hectares. The area, which is largely under nature conservation and monument protection, with a total of 41 monuments is on the one hand a place of remembrance and prayer, on the other hand a place to relax and go for a walk in the immediate vicinity of the city center.

View along one of the main paths

The cemetery was inaugurated in 1887 in the so-called "Kingdom of Heaven" west of the city in the direct vicinity of the old zoo . The original size of the "old part" was 10 hectares. The design was carried out by the Cologne architect Hilger Hertel the Elder , who had been the cathedral master builder of Münster since 1857. The first burial took place on February 2, 1887.

The construction of the new "Central-Kirchhof" became necessary after the population in Münster, as a Prussian garrison and administrative location, increased steadily at the beginning of the 19th century and the capacities of the three inner-city cemeteries "Kirchhof vor dem Neuthore" and "Kirchhof vor dem Hörsterthore" "And" Kirchhof vor dem Aegidiithore "were no longer sufficient. The administration took over the "Central-Kirchhofs-Commission", which is still responsible for the administration as the "Central Cemetery Commission". The central cemetery was to remain the city's only main cemetery until 1942, when the Lauheide forest cemetery was opened.

In 1914 there was an extension to the northwest of the “old part” by the “new part” in order to be able to identify further grave sites. The so far last and at the same time smallest expansion of the central cemetery was made in 1943, when it was added to the north-west corner between the slightly offset old and new part by the part "north-west". The area was leased by the city of Münster and was intended for the victims of the bombing war.

The Second World War also left its mark on the Central Cemetery after Münster was subjected to heavy bombing by the Allies . Towards the end of the war it was littered with 120 detonators. All mausoleums, many gravesites, monuments, buildings and trees were lost in the hail of bombs. Although the cemetery was closed between July 1, 1944 and July 31, 1947 and searched for duds, there are still a few bombs found more than 60 years after the end of the war.

The main entrance to the cemetery area is on Robert-Koch-Straße, a side street off Hüfferstraße.

The organ of the cemetery chapel was built in 1994/95 by the organ builder Peter Vier (Friesenheim). The slider chest instrument has 14 stops on two manual works and a pedal. The playing and stop actions are mechanical.

Tomb of the Sisters of Mercy

The old part of the central cemetery is both a listed building and a nature reserve. Its rectangular shape is surrounded by a 1,200 m long wall. The site itself is divided into 32 rectangular cemetery fields, which are assigned to the respective parishes or the evangelical church district of Münster as owners. The old part is accessed by two main paths that cross at right angles in the middle and that divide it into four sections. In the north-east-south-west direction there is another cross-connection to the north and south of the main road. In the north-west-south-east direction there are three cross connections to the west of the main route and four cross connections to the east. There are a total of 39 monuments in the old part of the central cemetery.

Like the old part, it is divided into special areas for the various parishes. There are a total of 574 victims of the world wars in three separate areas. Contrary to the usual right of use of 30 years, they are entitled to an eternal resting place in the central cemetery.

The north-west part of the central cemetery, which was inaugurated in 1943, initially served to expand the capacities in order to be able to provide urgently needed grave sites for the victims of the bombing war. The site has been leased by the city of Münster since 1943. Since 1984 a memorial commemorates the 1284 bomb victims from Münster during the Second World War. 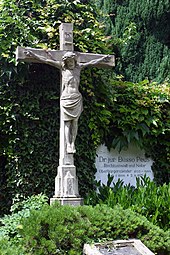