After attending the old grammar school in Bonngasse, he studied natural sciences and mathematics at the University of Bonn from 1842 , with a semester in Berlin in between. 1846 Hittorf was in Bonn at Julius Plucker with the essay "Proprietales sectionum conicarum ex aequatione polarize deductae" of the area conic sections doctorate . Hittorf was from the Prussian Minister of Education for the chair for physics and chemistry at the University of Münster , which had been orphaned since 1840 - at that time the Royal Academy of Münster i. W. - has been suggested. After his habilitation with an experimental thesis on the galvanic production of oxides of precious metals in August 1847, nothing stood in the way of his appointment to the Philosophical Faculty in autumn 1847. After the rejection of the call to the professor of Physics to Bern Hittorf in 1856 full professor. In 1879 the reorganization of the academy, which is largely his work, brought him the desired relief by creating a special professorship for chemistry, while Hittorf was able to limit his teaching activities to physics. The college that served his life's work owes him a lot. It was through him that she became famous.

In the winter semester of 1888/89, Friedrich Paschen was Hittorf's assistant. Hittorf was one of the first to introduce practical exercises in 1850/51. Hittorf was friends
with the Africa explorer Heinrich Barth .

In Münster, Hittorf initially worked on the elucidation of electrical conductivity. Research for certain physicochemical behavior sulphides (He spoke in this important treatise of sulfur silver and half copper sulphide .) Led Hittorf the important realization that these sulphides not metallic , but electrolytic lead. At the same time he introduced the term “metallic” into science for the first time and thus clarified Faraday's way of speaking of the “actual line”. The knowledge gained enabled Hittorf to observe the shift in the chemical equilibrium between Cu 2 S and CuS, which 16 years before Guldberg and Waage's law of mass action opened up a remarkable approach to research into this fundamental principle in chemistry. Investigations into the conductivity behavior also enabled Hittorf to substantially elucidate the phenomenon of allotropy of the chemical elements through research on phosphorus and especially selenium . He recognized that the change in the amorphous - crystalline modification takes place in exactly the same way as with the already known changes in the physical state , especially at a defined transformation temperature and with a certain heat tone .

Between 1853 and 1859, Hittorf carried out pioneering research into the mobility of ions in electrolysis . He had found concentration gradients on the electrodes and interpreted them by moving different ions at different speeds. By measuring, he was able to assign so-called characteristic transport factors to them, the Hittorf transport numbers named after him today . The work initially encountered opposition from important scientists. They appeared in the Ostwalds Klassiker series.

Together with Plücker, Hittorf researched the spectra of many chemical elements in gas discharge tubes - as an alternative or a necessary replacement to the flame spectrum. It was shown that allotropic modifications can result in different spectra.

The advances in experimental technology made it possible for Hittorf to go beyond Faraday 's research on electrical conduction phenomena in highly diluted gases. He carried them out in gas discharge tubes of various shapes, some with potential probes , and developed the Hittor tube .

In 1868/69, Hittorf observed the shadowing of the fluorescence on the glass wall by material obstacles and thus discovered the cathode rays and their linear propagation in the absence of a magnetic field . With this he created the basis for the development of X-ray tubes and cathode ray tubes . In 1869, Hittorf himself spoke of "the straight lines or the rays of glow". The characteristic change in the shadow cast by a magnetic field led Hittorf to compare it with a material electrical conductor. “If I am not mistaken, then these relationships are extremely favorable to allow us to draw conclusions about the process of the electric current itself; It is not impossible that the gases in our field, as in the theory of warmth, will most easily reveal the essence of phenomena and free modern physics from their last imponderables, the electrical ones thirty years later the investigation of the carrier of negative electricity was successfully completed.

Hittorf's gas discharge work had "gone completely unnoticed", William Crookes said ten years later that he was the first to describe the phenomena observed by Hittorf. Eugen Goldstein coined the term cathode rays in 1876; Philipp Lenard first experimented with these electron beams after JJ Thomson (1897) around 1894 outside of the Hittor tube.

Hittorf was a member of learned societies at home and abroad and an honorary member of the London Physical Society. The order Pour le mérite for science and arts since 1897 and the Bavarian Maximilian Order for science and arts counted him among their members. Hittorf holds an honorary doctorate in medicine and natural sciences, and he was one of the first of two technical universities to be awarded an honorary Dr.-Ing. appointed. In 1914 the city of Münster granted him honorary citizenship. 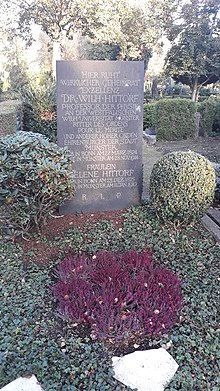 The grave of Wilhelm Hittorf and his sister Helene in the Münster Central Cemetery.