An electron beam, made visible as a colored trace by collisions with diluted gas. A magnetic field bends the beam into a circle.

An electron beam , formerly also a cathode beam , is a technically generated bundle of electrons . Since electrons in the air in the atmosphere lose their energy very quickly, electron beams require a vacuum or at least a gas pressure that is significantly lower than that of the atmosphere . With beta radiation in contrast, the unbundled natural electron or positron radiation referred from radioactive decays.

Electron beams form the basis for the picture tubes with which televisions , computer monitors and oscilloscopes were operated for a long time .

Technically generated bundles of electrons are known as electron beams. The beam generation is usually done technically with an electron gun , a radiation system, as it occurs in the cathode ray tube (Braun tube and picture tube). The electrons are released from a hot cathode and accelerated by an electric field. A further acceleration can take place with particle accelerators ( linear accelerator , betatron , microtron , synchrotron ).

When the cathode rays were discovered, rays emerged through an opening in a (positive) anode opposite the cathode and caused luminous phenomena. These rays obviously emanating from the cathode were therefore called cathode rays. In contrast, the rays of a gas discharge that arise when the cathode is cold are referred to as channel rays . Only later was it recognized that the former consisted of electrons and the latter of (positive) ions .

Shadow cross tube in operation. On the left side of the tube a shadow of the cruciform anode can be seen in the luminous phenomenon. 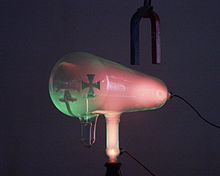 A magnetic field shifts the shadow of the anode - in this case downwards.

The investigations were stimulated by the search for the smallest particles of electricity as they should exist according to Faraday's laws . Therefore, electrical processes in dilute gases were investigated and luminous phenomena were found. Julius Plücker used gas discharge tubes in which cathodes were heated. He and his student Johann Hittorf discovered that

William Crookes , who invented the shadow cross tube for these investigations , found in 1879 that these rays also appeared in highly evacuated tubes in which otherwise no glowing phenomena of the gas discharge could be seen. He also recognized that they heat solids and exert pressure . This led to the discovery that cathode rays consist of particles .

Cathode rays were first systematically examined by Philipp Lenard in the 1890s. For this he built the so-called Lenard window , which consisted of a grid with an applied metal foil , and realized that the cathode rays could pass through a foil made up of several thousand atomic layers. Lenard also found that cathode rays can expose photographic plates and cause phosphorescence with suitable materials .

The beam can be deflected with suitably arranged electrodes under electrical voltage or with coils through which electrical current flows. Electrodes are also suitable for accelerating or braking the electrons. One speaks then of an accelerated or decelerated electron beam. In addition to the speed, electrodes can also be used to influence the divergence of the beam. The electrodes used to expand or focus the beam form the electron optics .

Lenard found the law of scatter:

= Number of electrons in front of the film,  = absorption coefficient,  = film thickness.

The first notable technical application was the electron beam as a directed beam in the Braun tube , which was developed by Karl Ferdinand Braun in 1897. The cathode ray is visible on a fluorescent screen inside the tube when it hits it. Applications are the cathode ray oscilloscope and the picture tube .

Accelerated pulsed deflected electron beams with relativistic speed are used at synchrotrons and the like. a. as a source of electromagnetic radiation ( synchrotron radiation ) from infrared to soft gamma radiation (see also free-electron laser ).

Electron beams interact strongly with matter, for example a solid heats up when it is irradiated with electron beams. This is used, among other things, to melt materials for example in electron beam melting or as a heater in electron beam evaporators . Structures in the micrometer range can also be easily influenced using an appropriate beam guide, e.g. B. Resistance adjustment .

According to Louis de Broglie, the electrons of an electron beam can also be assigned wavelengths according to their energy, but they are not themselves an electromagnetic wave . Their de Broglie wavelength is far below a nanometer for typical energies. Electron beams therefore have no limitations in their resolving power due to diffraction phenomena . Due to the pronounced interaction with matter, electrons are used to image and analyze the internal structure and surface of solids (see electron microscope , photoelectron spectroscopy and electron beam microanalysis ). They are also suitable for producing the finest structures in the nanometer range, for example in electron beam lithography .