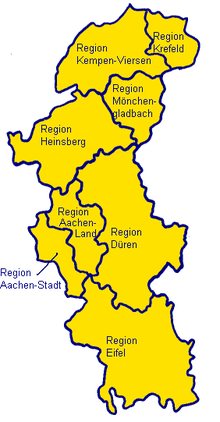 Overview map of the Diocese of Aachen by region

The diocese of Aachen ( Latin Dioecesis Aquisgranensis ) is a Roman Catholic diocese in the German church province of Cologne . The bishop's seat is the city of Aachen and the cathedral church of the High Cathedral in Aachen , which in 1978 was the first German monument to be included in the list of UNESCO World Heritage Sites . Heinrich Mussinghoff was the diocesan bishop from 1994 until his retirement on December 8, 2015 . On September 23, 2016, Pope Francis appointed the auxiliary bishop of Trier, Helmut This, as the new bishop of Aachen . He took office on November 12, 2016.

The diocese of Aachen is divided into the eight regions Aachen-Stadt, Aachen-Land, Düren, Eifel, Heinsberg, Kempen-Viersen, Krefeld and Mönchengladbach with a total of 71 communities of the communities . The level of the deaneries was abolished on January 1, 2007. 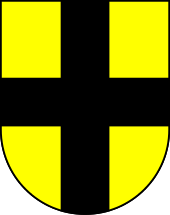 Coat of arms of the diocese of Aachen

Already at the beginning of the 19th century there was a diocese of Aachen for a short time. Its history is shaped by Napoléon's power politics and the reactions of the Holy See. It was established in 1802 by Napoléon, who composed it from the left bank of the Rhine area of ​​the Archdiocese of Cologne and parts of the Diocese of Liège and smaller parts of the Dioceses of Utrecht , Roermond and Mainz . In 1808 it was expanded to include the Wesel area. The first bishop was Marc-Antoine Berdolet , appointed by Napoléon. After Berdolet's death (August 13, 1809), Napoléon raised Jean-Denis-François Camus , known as Le Camus, as his successor, who, however, did not find approval from the Vatican . Pope Pius VII wanted to show the limits of the emperor's authority. After the end of French rule, the diocese was dissolved by the Pope with the bull De salute animarum de jure on July 16, 1821 and incorporated into the Archdiocese of Cologne. The final dissolution of the first Aachen diocese then took place on 24/25. March 1825 after the last session of the cathedral chapter .

Today's diocese of Aachen was established on August 13, 1930. First, in 1929, the Prussian Concordat between the Holy See and the Free State of Prussia was signed by Nuncio Pacelli, who later became Pope Pius XII. , and the Prussian Prime Minister Otto Braun . With the papal bull Pastoralis officii nostri on August 13, 1930 and the decree of the Apostolic Nuncio in Germany, regarding the cathedral chapter Circumscripto of the diocese of Aachen , the re-establishment was carried out. Joseph Heinrich Peter Vogt was ordained bishop.

In recent years, a process of amalgamation of parishes and the formation of pastoral care units in the diocese of Aachen has been initiated. The background to this is the declining numbers of priests and parishioners and the resulting need to save.

In the New Year's Eve sermon 2017, Bishop This announced a synodal discussion and change process that should last until 2021. Encounters, then discussion forums and individual sub-process groups are set up with the strong participation of interested laypeople in particular.

The patroness of the diocese of Aachen and the Aachen Cathedral is the Mother of God Maria under the title of her acceptance into heaven (August 15).

In the Diocese of Aachen, the regional calendar for the German-speaking area is supplemented by the following celebrations (followed by the rank): 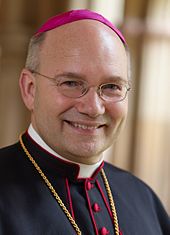 Helmut has been the seventh bishop of Aachen since 2016 . He succeeded Heinrich Mussinghoff , who held the office of bishop from 1994 until his retirement in 2015. 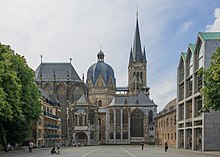 Aachen Cathedral
See also : List of profane churches in the Diocese of Aachen

→ Main article : Episcopal Academy of the Diocese of Aachen

The diocese's balance sheet total in 2017 was EUR 808.2 million with income of EUR 346.9 million, of which EUR 252.4 million (75.8 percent) was church tax , that of the Episcopal See was just under 8, 7 million euros. The Episcopal See Aachen is an independent corporation under public law . The balance sheet total of the cathedral chapter in Aachen amounted to a good 26 million euros in 2017.