Erwin Ringel (born April 27, 1921 in Timișoara , Kingdom of Romania ; † July 28, 1994 in Bad Kleinkirchheim , Carinthia ) was an Austrian doctor and representative of individual psychology .

Ringel was a specialist in psychiatry and neurology as well as a suicide researcher . Erwin Ringel set up the world's first suicide prevention center in Vienna in 1948. In 1954 he became head of the women's psychiatric ward in Vienna , where he founded the first psychosomatic ward in Austria.

Erwin Ringel was born in Timișoara on April 27, 1921 . The parents lived in Hollabrunn , but according to the customs of the time, his mother went to her parents' house in Timișoara for the delivery. He spent the first years of his life in Hollabrunn.

"A long and significant period in my life was that I grew up under very happy conditions, that my parents had a wonderful marriage, and what is particularly important, taught me a lot of their values."

In 1926 the family moved to Annagasse in Vienna. The father worked as a middle school teacher at the Hegelgasse teacher training college . The proximity to the Vienna State Opera and the major theaters made it easier for the extremely curious child and young people to acquire a profound knowledge of opera and theater literature. One of his favorite games was quick-witted quoting classics. From 1931 to 1939 he attended the academic high school . In 1939 he was taken into custody by the Gestapo for a few weeks because he had worked as a parish youth helper at the anti-Nazi rally on October 8, 1938 at Stephansplatz .

In 1939 he began studying medicine, but was repeatedly drafted into the German armed forces . In the last two years of the war he was able to work as a doctor in reserve hospital 11 A (Rudolfspital).

After receiving his doctorate in 1946, Ringel trained as a specialist in psychiatry and neurology at the Psychiatric University Clinic in Vienna. In 1948 the first suicide prevention center in Europe was set up within the framework of Caritas Vienna . In 1975 this “care for the tired of life” became the “Crisis Intervention Center”, independent of the Church, which still exists in Vienna today. In 1953, Ringel described the “ presuicidal syndrome ” after examining 745 rescued suicides . Today this is considered a milestone in suicide research.

From 1953 to 1964 he was entrusted by his boss Hans Hoff with the management of the women's department at the Psychiatric University Clinic in Vienna. In 1954, Ringel set up the first psychosomatic ward in Austria. As a pioneer for psychosomatic medicine, he had to overcome a lot of resistance. Through numerous lectures he has done important educational work in the population, and he gradually gained acceptance for psychosomatics among the medical profession . Since 1987 doctors have been able to receive the "Diploma for Psychosomatic Medicine" through special training in psychosomatic medicine.

In 1960 Ringel founded the "International Association for Suicide Prevention" (IASP). He became its first president until 1969 and later honorary president. Today more than 50 countries belong to the IASP. In the USA, Erwin Ringel was affectionately known as “Mr. Suicide".

From 1960, together with Walter Spiel and Kurt Baumgärtl, Ringel rebuilt the Austrian Association for Individual Psychology , which had shrunk to a few members as a result of the ban on individual psychology in the Third Reich . From 1960 to 1988 he was president of this association. At the instigation of his student and colleague Gernot Sonneck , Ringel began systematically to take care of the training of young individual psychologists. Today the "Austrian Association for Individual Psychology" is an important depth psychology school. Erwin Ringel also saw one of his important tasks in reconciling the “Freudians” with the “Adlerians”.

In 1961 Ringel achieved his habilitation . In the same year he was awarded the Karl Renner Prize of the City of Vienna for his services in suicide prevention. In 1968 he was appointed associate professor at the University of Vienna . In 1971, Ringel was a founding member of the International College for Psychosomatics. In 1978 he founded the Austrian Society for Clinical Psychosomatic Medicine and was elected President.

In 1981 Erwin Ringel was appointed full professor for medical psychology. As a 60-year-old, he built up something new. Because the subject “Medical Psychology” was only included in the medical curriculum in 1981. He was an enthusiastic teacher who could also inspire some of his students. He finally had the opportunity to speak to all medical students about the importance of the mental state of sick people and the importance of the doctor-patient relationship. He was the head of the institute until his retirement in 1991. 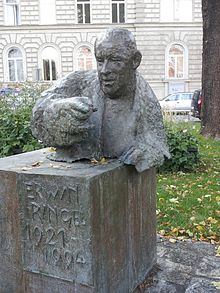 Monument to Erwin Ringel by Josef Zenzmaier on Schlickplatz in Vienna

From 1984 to 1994 Ringel was chairman of the Association for Probation Assistance and Social Work. In 1984 his book Die Österreichische Seele brought great media success, but also numerous hostilities. In this context, he received many nicknames: from "soul doctor of the nation" to "nest defilter".

In 1986 Ringel received the Austrian Cross of Honor for Science and Art, 1st Class, as well as the Golden Decoration of Honor for services to the State of Vienna . In 1987 he published his book "The First Years Decide", in which he points out the importance of a loving and good upbringing. In 1991 he was made a citizen of the City of Vienna .

Erwin Ringel died of heart failure in Bad Kleinkirchheim on July 28, 1994. He is buried in a grave of honor in the Vienna Central Cemetery (group 33 G, number 3).

On May 12, 1998, the park at Schlickplatz was renamed Erwin-Ringel-Park by a municipal council resolution and a monument designed by Josef Zenzmaier in honor of Erwin Ringel was erected there.

Over 250 publications, books and lectures on the topics of suicide prevention, psychosomatics, neuroses, social psychology, art, politics and religion: