When the grammar school was founded, the University of Vienna had the privilege of deciding on the establishment of teaching establishments. In March of 1553 the Jesuits received the university 's permission to establish the Academic Gymnasium.

The primary teaching goals of the exclusively Jesuit faculty were to impart religious knowledge, to practice the Catholic faith and to strengthen the religious attitudes of the students. At the time of its foundation, the academic high school was housed in the Dominican monastery opposite the university at the time. The language of instruction at that time was Latin.

The abolition of the Jesuit order in 1773 by Clement XIV led to a change in the teaching staff and the educational goals. The new focal points were history, mathematics, German, literature and geography. The management of the high school was transferred to the Piarist order . As a result, the high school was run in a more cosmopolitan manner and the spirit of enlightenment prevailed among both the teachers and the students. Likewise, new didactic and pedagogical measures and later also the school fees were introduced.

As a result of the grammar school reform in 1849, the eight-class grammar school with the final Matura examination was developed. The humanistic aspects crystallized more and more, the main focus of the lessons were mainly linguistic-historical, whereby the mathematical-scientific aspects were not neglected. The first high school graduates took their final exams at the end of the school year 1850/51.

The Academic Gymnasium building has been located on Beethovenplatz in the first district of Vienna since 1866 . It was built by Friedrich Schmidt , who later planned the Vienna City Hall , in the neo-Gothic style typical of the architect . The house was opened on October 17, 1866 in the presence of Anton von Schmerling and Andreas Zelinka , Mayor of Vienna.

The first female student graduated as an external student in 1886. Another girl graduated the following year, and since the school year 1896/97 there have also been high school graduates almost every year; there has been a general admission of girls since 1949/50.

The years after the First World War were extremely stressful for the grammar school, because it was only just possible to avoid a closure, the cause of which was a sharp decline in the number of students. The educational institution threatened to lose its good reputation and its attractiveness.

Memorial plaque for Jewish students of the Vienna Academic Gymnasium

After the “Anschluss” of Austria in 1938, the Jewish students and three teachers had to leave the school and were placed in another grammar school in the 2nd district of Vienna in Leopoldstadt on April 28, 1938 , but some of the students had already de-registered before this date . The total loss was almost 50 percent of the pupils, since the school was attended the most of all Viennese grammar schools by children of Jewish families. Today several memorial plaques on the outer facade of the grammar school remind of the retraining and the horrors of National Socialism . A well-known victim of the measures at that time was the later Nobel Prize winner Walter Kohn , who had to leave school in 5th grade.

Wolfgang Wolfring (1925–2001) made the grammar school known from 1960 onwards as the site of classical Greek dramas in the original Greek language . Every year there were performances of classical Greek dramatic literature, including King Oidipus , Oidipus auf Kolonos and Philoctet by Sophocles , the Oresty by Aeschylus and The Trojans and Alcestis by Euripides . The protagonists of these performances were the later lawyers Josef and Eduard Wegrostek, Liliana Nelska , Doris Dornetshuber, Gerhard Tötschinger , but also Gabriel Barylli , Paulus Manker , Konstantin Schenk and others in smaller roles .

Over the years, the high school regained its old reputation and enjoyed high access rates. More and more emphasis was placed on humanistic education, which was demonstrated to the general public by the wide range of languages, school theater performances at a high level and numerous musical events by the school choir. From 1979 to 1991, the teaching staff also included the philosopher Konrad Paul Liessmann (history and philosophy / psychology / education).

Students of the grammar school taking lessons outdoors on Beethovenplatz

The focus is still on a broad linguistic foundation, which also includes training in languages ​​such as Latin or ancient Greek . The school offers both French and English from first grade. The other of the two languages ​​does not begin until the 3rd grade.

In addition, various projects are organized and non-binding exercises are offered. The aim of the Academic Gymnasium is general education , which in turn is intended to prepare for a later university course.

One problem is the lack of space in the school. Since there is a great demand for school places, but the school building cannot be expanded for financial reasons and those of the monument protection, school places are not available for all applicants.

The Akademisches Gymnasium has produced a large number of well-known personalities in its history: 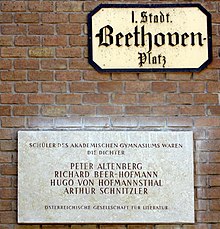 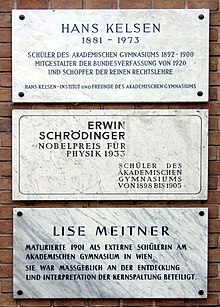