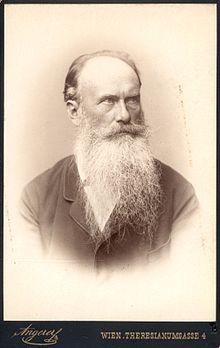 Friedrich (Wilhelm) Schmidt (born October 22, 1825 in Frickenhofen in Württemberg ; †  January 23, 1891 in Vienna ) was an architect of the Ringstrasse era who established the neo-Gothic style. He was an honorary citizen of the city of Vienna and was allowed to call himself Friedrich Freiherr von Schmidt from January 22, 1886 .

Memorial in the birthplace of Frickenhofen 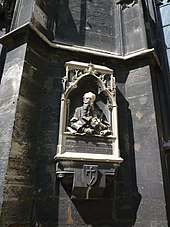 Memorial plaque on the south tower of St. Stephen's Cathedral in Vienna

Baron coat of arms of Schmidt with stonemason mark , 1886

Friedrich Schmidt, the son of a pastor , came after at Adolf Breymann at Polytechnic Stuttgart completed study (1840-43), which he simultaneously by the Steinmetz teaching as well (using independent) studies of the Gothic buildings in Swabia added that in 1843 in the cathedral workshop Cologne , where he rose to the position of foreman . In 1848 he passed the master craftsman's examination as a bricklayer and stonemason, in 1856 the master builder examination at the Berlin Building Academy . From 1847 onwards, he developed extensive design and construction activities, which included small architectural objects as well as restorations and conversions with a focus on the sacred sector. From 1851 he ran a private construction company. Schmidt's fondness for the Gothic, which was allegedly already expressed in his youth, consolidated into special expertise around the middle of the century, but he was denied a further career within the cathedral builder due to disputes with the cathedral builder Ernst Friedrich Zwirner , but not least because of his Protestant faith. An attempt to appoint Schmidt as a teacher at the architecture school of the Karlsruhe Polytechnic in the winter of 1854/55 failed due to the contradiction of the former position holder Heinrich Hübsch , a little later he said goodbye in Cologne when he was filling the position of cathedral builder in favor of the younger Richard Voigtel was passed over.

The commission for a memorial for Austrian soldiers who died in 1794 in Bensberg , made in 1854/55 according to his design, had already opened up contacts to Austria for Schmidt, which deepened in 1855 when he emerged from the competition for the Vienna Votive Church as one of the prize winners. Archduke Ferdinand Maximilian became aware of him and had him appointed to the Academy in Milan in 1857 by the Minister of Education Leo von Thun and Hohenstein , where Schmidt (until 1859) was in charge of medieval architecture. In 1859 Friedrich Schmidt converted to Catholicism.

In 1859 he came to the Academy of Fine Arts in Vienna as a professor of medieval architecture , where he took over the architecture school from 1865 (together with Karl Roesner and August von Sicardsburg ) , which he led until the end of his life (among other things as rector of the academy in 1872 -74, 1876-78, 1882-84). An important basis for his teaching activities was the extensive inventory of medieval architectural drawings, which had been in the academy's possession since 1837.

After overcoming initial resistance, Schmidt soon developed into one of the leading artistic personalities of the Ringstrasse era in Vienna and achieved decisive recognition in both sacred and profane neo-Gothic architecture. In 1860 he became a member of the building commission of St. Stephen's Cathedral as well as the kk Central Commission for the research and preservation of architectural monuments , in 1862 he took over the management of the building works of St. Stephan and the chairmanship of the Wiener Bauhütte association , in 1863 he became master builder of St. Stephen's cathedral . Right at the beginning of his cathedral construction work, one of his decisive measures was the rebuilding of the south tower helmet, which had been demolished for structural reasons; the completion of the north tower projected by him was omitted. In the years 1866–68, 1870–72, 1874–77, 1879–81, 1883–85 he was in charge of the Austrian Association of Engineers and Architects .

The restoration of Runkelstein Castle near Bolzano , which was carried out between 1884 and 1888, was one of the outstanding works in the field of medieval secular construction . This restoration represented an intervention in an object with a complex architectural history, whereby Schmidt treated the preserved medieval remains with astonishing respect for his time.

Many of his designs were implemented in Vienna by the Bohemian master builder Josef Hlávka . Among the most important students of Friedrich Schmidt are his later collaborator Franz von Neumann and Frigyes Schulek , Imre Steindl and Valentin Teirich .

Friedrich von Schmidt died on January 23, 1891 in the atonement house he had designed a few years earlier and was given an honorary grave in the Vienna Central Cemetery (group 14 A, number 54). The massive stone plate, which is the grave covered from the house break the brothers amelin in Kaisersteinbruch cut. In the year Schmidt died, August Reichensperger published his first biography about him.

The square behind one of his main works, the Vienna City Hall , was named Friedrich-Schmidt-Platz in his honor in 1927 ; there is also his monument, which was created by Edmund Hofmann von Aspernburg and Julius Deininger and unveiled on May 28, 1896.

He was an honorary member of the German Reading Club at the Technical University of Vienna.

Friedrich von Schmidt's importance is based primarily on three areas of activity: as an international architectural artist, as a monument conservator and as a teacher with a significant school impact. The artist and the restorer cannot be separated in their work, which makes some works appear ambivalent despite their greatness, as the creative often predominates in the redesigns (St. Stephen's Cathedral, Klosterneuburg Monastery, Vajdahunyad Castle , etc.). Schmidt is primarily regarded as a Gothic, but this is not to be understood in a doctrinal way, since not only do divergent Gothic traditions intersect in his oeuvre, but also various stylistic idioms that relativize the specialty, some of which belong to the Neo-Renaissance and Neo-Romanesque . The Italian experiences, the impressions of the South German and Southeast European late Middle Ages and even the Baroque were added to the foundations of the Cologne period, which included French and Dutch . Accordingly, he interlaced the - nevertheless dominant - strictly historical style elements with both romantic tendencies and late historical features. The parish churches not only stand out numerically in sacred buildings. Schmidt used the tradition of neo-Gothic brick building established for Vienna by Hermann von Bergmann (1817–1886) and elevated this to the dominant mode (St. Othmar 1863, etc.). The highlight was the Church of Maria vom Siege in Vienna (1868–1875), in which the Gothic style merges with the baroque central dome.