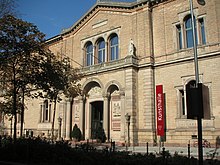 Entrance to the Speyer Cathedral 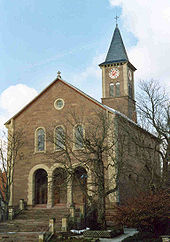 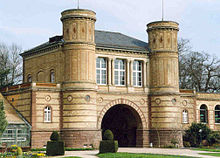 Heinrich Hübsch (born February 9, 1795 in Weinheim , † April 3, 1863 in Karlsruhe ) was a German architect , university professor and construction clerk in Karlsruhe for the Grand Duke of Baden . The advocate of the round arch style was the chief construction officer and leading architect of the Grand Duchy of Baden, succeeding his teacher Friedrich Weinbrenner .

Heinrich Hübsch grew up in Weinheim an der Bergstrasse as the son of the royal Thurn and Taxis post administrator Karl Samuel Hübsch (1768–1842) and his wife of the pastor's daughter Friederike Pagenstecher (1773–1849).

After attending the grammar school in Darmstadt, which at that time was under the direction of the pedagogue IG Zimmermann, Heinrich Hübsch enrolled at the Ruprecht-Karls-Universität Heidelberg in spring 1813 , where he studied philosophy and mathematics . The student's academic training did not satisfy the student; rather, his interest in art awakened through his occupation with works by Johann Wolfgang von Goethe and Friedrich Schlegel as well as the old German painting collection of the brothers Sulpiz Boisserée and Melchior Boisserée (1786–1851).

After joining Friedrich Weinbrenner's building school in Karlsruhe in 1815, Hübsch first had to put aside his own artistic ambitions. In 1817 he went on a trip to Italy , where he lived, preferably in Rome , the center of German art life, during his three-year stay . Hübsch studied ancient architecture and after a trip to Athens and Constantinople in 1819 (with Joseph Thürmer and Franz Heger ) published two works on Greek architecture in Heidelberg in 1822. More important for its development, however, was dealing with the artists living in Rome.

In Rome, Hübsch also got to know the early Christian basilicas , in which he recognized models for his own work. The Gothic of Upper and Central Italy, which on the outward journey had seemed imperfect compared to the German Gothic, also gained decisive importance for him on his return home.

In 1820 Huebsch passed the state examination with Friedrich Weinbrenner and returned to Rome in 1822 to complete his studies because there was no suitable field of activity for him in Karlsruhe. On the recommendation of the historian Johann Friedrich Böhmer , in the spring of 1824 he got a job as a teacher at the vocational school of the newly founded Städel Institute in Frankfurt am Main . He received his first major construction contracts with the main Protestant church in Barmen (1825–1829) and the orphanage in Frankfurt (1826–1829).

After Weinbrenner's death in 1827, Hübsch was appointed to the Baden state service as a member of the building commission and architect of the residential city of Karlsruhe. His appointment as a member of the building management team in 1828 was followed a year later by the appointment as building officer, in 1831 as senior building officer and in 1842 as building director. As the highest construction official in the state, he had a great influence on the construction process in Baden.

In 1832, Hübsch was appointed head of the Karlsruhe Building School, where he taught until 1854. This building school, which had been headed by Weinbrenner as a private institution since 1800, had been part of the newly founded Polytechnic School in Karlsruhe since 1825, which later became the Technical University of Karlsruhe or what is now the Karlsruhe Institute of Technology .

The sculptor Karl Friedrich Moest created a monument to the architect for the palace garden in Karlsruhe .

He married Luise Heller in Freiburg im Breisgau in 1828 , a daughter of the archbishop's office director Heinrich Heller . The couple had a daughter who died young.

After his acceptance into the Baden state service, Hübsch erected the two guard houses of the Karlstore (which were removed for traffic reasons in 1912 and 1967) in Karlsruhe as his first public building contract from 1828 to 1830 , with their three arched arcades reminiscent of the Loggia dei Lanzi in Florence. After his appointment to the Polytechnic School, founded in 1825, he received the order for the new university building, today's main building of the Karlsruhe Institute of Technology, which he designed in the form of an Italian palazzo in the arched style (expanded in 1864 by Friedrich Theodor Fischer to include a new central building and an eastern wing).

The buildings in the Karlsruhe palace district were an important area of ​​responsibility for Hübsch. The first building he erected was the Finanzkanzlei (today's Karlsruhe regional council) on Schlossplatz as a sober exposed brick building with sandstone structures and a staggered structure with a raised central section (closed on three floors during the reconstruction after 1945 ). From 1837 to 1846 the building of the Kunsthalle was built , which programmatically represents the architectural style propagated by Hübsch through the use of the arched windows and the Venetian window or "Serliana". From 1851 to 1853, the previous building built by Friedrich Weinbrenner caught fire and was followed by the Court Theater (destroyed in 1944, demolished in 1964), which was completely vaulted for fire protection reasons. As with buildings from the Italian Renaissance, its decor consisted of terracotta reliefs. From 1853 to 1857 he built the orangery , in which he realized the principle of polychromy achieved by choosing different stones in the sense of the material aesthetics he propagated, while the buildings of the Botanical Garden with their city gate-like central structure were created in the sense of late romantic historicism.

Outside of Karlsruhe, Hübsch built the Baden-Baden drinking hall between 1837 and 1840 . It is characteristic of his conception of architecture that he replaced the classic structure of the column front with horizontal beams with a segmented, self-supporting construction. The Bruchsal penitentiary, built in 1841-48, was planned according to the then modern system as a star-shaped four-wing complex starting from a central octagonal building, surrounded by a fortress-like polygonal wall with battlements and a crenellated wreath and a classic-shaped access portal with rustic cuboids.

Church buildings represent an important aspect of Heinrich Hübsch's building work. On the basis of the early Christian churches that he examined and published in Rome ( The Early Christian Churches , 1863), he developed a church style in the form of flat-roofed basilicas with manageable interiors. His first work was the Unterbarmer main church in Wuppertal , which was built from 1828 to 1832 . The St. Cyriakus Church in Karlsruhe- Bulach , built from 1835 to 1837, followed from 1858 to 1862 by the Church of St. Ludwig in Ludwigshafen am Rhein, has programmatic significance in his work .

His numerous country churches show that he reassembled materials and constructions for each assignment. This resulted in a striking variety, which in addition to round arches also segmented and pointed arches ( Evangelical Church in Zaisenhausen , 1834–36), as well as vaults and flat ceilings (St. Laurentius in Kronau, 1860–61; St. Michael in Bühlertal, 1862–63 ), along with stone and wooden supports (Evangelical Church in Gondelsheim, 1838–42). In doing so, he refuted the narrowing to the round arch style associated with his name.

In addition to the new building projects, Hübsch dealt with the restoration and reconstruction of medieval churches. The relocation of the Tennenbach Monastery church , which was rebuilt as the Ludwig Church in Freiburg by order of Grand Duke Ludwig, posed a challenge . After Friedrich Eisenlohr had made a construction survey of her in 1829 before her demolition, her reconstruction began in Freiburg, whereby Hübsch reversed later changes in the sense of a desired style purity.

In the construction of the neo-Gothic tower structure of the Constance Minster (1851-1853), Hübsch was only involved in his supervisory role as Baden's construction director; the planning was carried out by building officer Ernst Oehl. The rebuilding of the western building of the Speyer Cathedral , which Hübsch undertook from 1854–1858 on behalf of the former Bavarian King Ludwig I, in the spirit of early historicism , was more decisive. A follow-up order was to rebuild the towers of the Berchtesgaden collegiate church , the construction of which could only be completed after his death in 1864.

In his book In Which Style Should We Build, published in 1828 ? Hübsch developed a program for a new architectural style. The most important requirement was to overcome Weinbrenner's classicist architecture in favor of a new style language, as has already been achieved in the visual arts. He identified the essential elements of the style: ceiling and walls; Pillars and pillars; Doors and windows; Roof and main cornice. Decisive are the demands of the climate and the available building materials, which in Central Europe exclude the use of ancient forms and materials (marble) and instead demand sandstone and brick construction in visible use. Instead of the classic system of columns and architraves, pillars and round or segmented arches would have to be used. The Gothic pointed arch, on the other hand, should be rejected because of its unfavorable height development, especially for multi-storey buildings. Since the round arch has otherwise predominated in the entire architectural history, for example in the Roman, the early Christian, the modern Greek (Byzantine), the Romanesque and even in the baroque architecture, this should also be used for the new construction of the round arch style .

Although he used the concept of the round arch style only hesitantly and then retrospectively in this early and short script on historical buildings, it has since been identified with Heinrich Hübsch. In his main theoretical work "Architecture and its relationship to contemporary painting and sculpture" the term is completely absent; In it he now propagated a balanced, factual approach even more comprehensively and clearly, which explicitly allowed the trying out different possibilities, as he himself demonstrated in his building practice.

The buildings and literary work of Hübsch exerted a decisive influence on the architecture of the mid-19th century. The fixation on the word of the round arch style has long blocked the view of the creative diversity in his work. As was only shown in the new literature, he by no means drafted a dogmatic style theory, but rather a broad basis in order to think through the respective order in all directions and to find the most suitable form for it. The central goals of this approach were the most efficient construction possible, the sensual appearance and color of the building materials and the equal inclusion of works of art, especially wall paintings, reliefs and sculptures, with which the architecture should merge into a unit: "sensual, material-loving and addicted to beauty".

In this consequence, Hübsch's conception of architecture remained unique, which can be explained by Hübsch's individual career between the romantic philosophy and the rationality of his teacher Friedrich Weinbrenner, and therefore also from the cultural tradition of the state of Baden. That is why she was able to find a faithful echo there in the work of his pupil and successor Jakob Hochstetter.

But it also had an impact beyond that. Friedrich von Gärtner followed in Munich, Karl Friedrich Schinkel and the subsequent Schinkel School in Berlin , Conrad Wilhelm Hase in Hanover and the Hanover School of Architecture founded by him in the direction opened by Hübsch. His ideas also exerted a significant influence on Gottfried Semper's work The Style in the Technical and Tectonic Arts or Practical Aesthetics (published 1860–1863) and on the subsequent architecture of Historicism, which, however, was oriented towards concrete historical architectural styles, namely Gothic , was increasingly negative about the rather sober concept of Hübsch and the simplicity of the buildings that he called for.