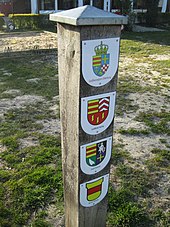 South-eastern border of the Oldenburger Münsterland on the Dümmer . Border post with current and historical coats of arms

Gerbert Castus monument at the parish church of St. Vitus in Visbek: Depicted are the abbot Gerbert Castus , the priest Folcard (a colleague of the first Bremen bishop Willehad ) and a companion of the two, Count Emmig

Typical OM landscape on the Krimpenforter Berg: a cross between the road and a harvested maize field ; in the background a cold store building

From Visbek , Abbot Gerbert Castus - the apostle of the Oldenburger Münsterland - led the Christianization of the Saxons a . a. in Lerigau , Hasegau , Venkigau , possibly also in northern Dersagau , i.e. in the Oldenburger Münsterland. By a certificate from 1 September 819 Emperor to Louis the Pious the fiscbechi of Castus mentioned Abbey and the churches under him have granted full duty exemption. However, this document is now regarded as a total forgery from the late 10th century.

Before that, from 780 AD, Charlemagne (* probably April 2, 747 or 748; † January 28, 814 in Aachen) had established nine mission districts to Christianize the subject Saxons , one of which was the Benedictine abbey cellula fiscbechi (Visbek) educated. The first church of the mission district, the so-called original church, was built in Visbek. The first parishes in the Oldenburger Münsterland were founded from the Visbek mission cell. Among them were u. a. in Lerigau probably the parish churches Krapendorf , Altenoythe , Bakum and Emstek , in Hasegau the Gaukirche Löningen , and the Gaukirche Freren in Venkigau . Even Lohne in northern Dersagau should be a Visbeker foundation.

At the time of the Reformation under Bishop Franz von Waldeck, the area was dominated by Lutherans for around 70 years from 1543 to 1613. At that time, the Protestant reformer Hermann Bonnus worked in this region . In the course of the Counter Reformation , led by Bishop Ferdinand of Bavaria , the region was re-Catholicized. In this context, it is of great importance that Christoph Bernhard von Galen , then Bishop of Münster, bought spiritual sovereignty over what is now Oldenburger Münsterland from the Diocese of Osnabrück in 1668. Only then was he able to exert considerable, sustained pressure on his subjects to confessional pressure, from which only the country nobility in the region were protected. Nevertheless, after 1613 there was still a minority of non-aristocratic Protestants in the outskirts of the Oldenburger Münsterland. In the district of Cloppenburg, 346 of 32,663 inhabitants were Protestants in 1846, and of 35,254 in 1996 in the district of Vechta. In the 1920s, received in accordance with the then denomination ratio in the division of Wulf Auer Mark seven Catholics and five Protestants Kolonat . In Goldenstedt, Wulfenau and Cloppenburg, Protestant Christians were given their own houses of worship in the middle of the 19th century. Protestant churches were built across the board after the Second World War because there were a large number of Protestant Christians among the refugees and displaced persons who found a new home in the Oldenburger Münsterland.

The bishop of Münster remained the spiritual , if not secular, head of the Catholics in the Oldenburger Münsterland even after the Reichsdeputationshauptschluss of 1803 (secular head was the - evangelical - duke, later Grand Duke of Oldenburg). Since the 1820s, the episcopal official in Vechta has been his permanent representative for the entire area of ​​the Oldenburger Land , which according to the law of the Catholic Church still belongs entirely to the diocese of Münster. As a worldwide unique institution in terms of state church law, the Bischöflich Münstersche official office with regionally defined competence represents the executive power (potestas executiva) of the bishop like a vicariate general. Auxiliary Bishop Wilfried Theising , titular bishop of Minadas, has held the office of official in Vechta since January 2017 .

Calvary at the Church of St. Bonaventura in Mühlen

A visible sign of a lively traditional popular piety in the Oldenburger Münsterland is the multitude of wayside shrines , wayside crosses and crossroads in the open air. There are more than 100 wayside crosses in the area of ​​the city of Lohne alone.

The Oldenburger Münsterland has traditionally been a stronghold of the CDU since its inception . Since 1947 the respective constituency candidates of the CDU have been directly elected in all elections to the Lower Saxony state parliament and since 1949 in all federal elections, and the CDU received an absolute majority of the votes in all elections.

At the moment the area of ​​the Oldenburger Münsterland is congruent with that of the Bundestag constituency Cloppenburg - Vechta , while the layout of the Landtag constituencies overlaps with the area of ​​neighboring districts. In elections to the Lower Saxony state parliament, the town of Wildeshausen and the community of Großenkneten in the district of Oldenburg belong to the constituency of Cloppenburg-Nord , and the town of Damme and the community of Neuenkirchen-Vörden in the district of Vechta were assigned to the constituency of Bersenbrück . The constituencies of Cloppenburg and Vechta are located entirely in the Oldenburger Münsterland area .

Johann Gottfried Hoche , Protestant preacher and travel writer from Halberstadt, traveled from Hunteburg via Damme, Holdorf, Quakenbrück, Essen, Molbergen and Ellerbrock near Friesoythe to Saterland in 1798 and published his travel impressions in Bremen in 1800. It says:

“The whole line of land from Quackenbrück via Vechta, Kloppenburg, Frisoyta to the Soeste, from there over the Ems and back up to the Hase is not only one of the worst in Westphalia, but in all of Germany. You think you are in the steppes of Siberia when you wade through the Haiden ... Everything is barren and quiet, not a bird sings its morning song and delights the wanderer's ears. Not a tree, not a bush offers him shade ... Sometimes you walk on unsteady ground, sometimes you struggle to get your foot out of the sand, then you walk through a half-starved grain, in a field that has stolen the Haiden and approaches a small village where this picture finds even brighter colors. The creation seems to be here still unfinished. "

However, these impressions were largely not true; because the Cloppenburg doctor Joseph König corrected the description of Hoches shortly afterwards:

“Take the chart of the former Nieder (stift) Münster and look at the route our author noted on it and hear and read what he says here, (and indeed) says as firmly as if he had weeks and moons all over the country Traveled through and through. Strange: He has not seen a tree, and we find not one but several individual farmers who own for 2, 3 and 10 thousand Reichstaler in oak alone. He also says of half-starved grain ... (But) where does it come from that we only have deficiencies when there is really bad growth and that we can also carry out grain at all times? "

The Oldenburg Münsterland is centrally located in North-West Germany in the metropolitan area of North West and is defined by the Federal Highway 1 with the metropolitan regions Rhein-Ruhr and Hamburg connected. Thanks to this favorable long-distance traffic connection, the Oldenburger Münsterland was able to develop into an up-and-coming region in Lower Saxony in the 1990s.

The unemployment rate in the Oldenburger Münsterland was 4.5% in 2014, around 2 percentage points below the national average, and the home ownership rate of over 80% is one of the highest in Germany.

Stables at Hemmelte
→ Main article : Agriculture in the Oldenburger Münsterland

The Oldenburger Münsterland is still above all agriculturally embossed region and has the largest concentration of processing plants of poultry , pork and beef farms ( factory farming ) in the Federal Republic of Germany. In addition to the processing, the regional fruit and vegetable production with cultivation areas of over 4500 hectares is an important economic factor.

Many industries have settled in the “atmosphere of arable farming and cattle breeding”: agricultural machinery manufacturers, manufacturers of stable and feeding systems, vegetable processors, plastics and packaging companies. As a result (and not only through agriculture and the agricultural industry itself) the Oldenburger Münsterland has become one of the boom regions in Germany.

North bank of the Thülsfeld dam

Wehlburg court complex in the museum village of Cloppenburg

The Oldenburger Münsterland offers many opportunities for tourists. It is divided into five vacation and recreation areas. Here are the densely wooded Dammer Mountains with the Dümmer water sports center , the Thülsfelder Talsperre archipelago area rich in fish and birds , the extensive moorland areas in the northern district of Vechta with the humid lowlands of the Aue and Twillbäke streams and their watermills in the Bäken der Endeler and Holzhauser Heide nature reserve in the municipality Visbek , as well as the river landscape of the Hasetal . In the far north of the Oldenburger Münsterland lies the Barßel - Saterland water territory . The 306-kilometer pit stop route is a long - distance cycle path through the aforementioned recreation areas. By the Oldenburger Münsterland leading holiday routes Route of Megalithic Culture , Lower Saxony Asparagus Route , Lower Saxon Mill Road , German Fehnroute and Industrial Heritage Trail in the northwest .

The museum village of Cloppenburg , one of the oldest and largest open-air museums in Germany, is of great importance for the region . The rural culture of the north-west, which was shaped by the Saxons and Frisians , is shown here. The museum village wants to research the rural monuments of the state of Lower Saxony and document them realistically in authoritative examples. Although it is not the aim of the institution to attract as many visitors as possible, the museum village of Cloppenburg recorded the highest number of visitors (250,000) of all museums in Lower Saxony in 2009.

Both districts have a public district music school as well as numerous urban or regional private music schools. Furthermore, the music of the Oldenburger Münsterland is very much influenced by brass music, so that there are traditional brass bands in every community and larger villages . The churches in the region are responsible for numerous choirs as well as some Protestant trombone choirs . In addition, the brass quintet BrassEvolution brings together young, talented brass players from the entire Oldenburger Münsterland.

Summarized fertility rates in Germany by district and urban district.

The names of the two largest newspapers, the Oldenburgische Volkszeitung (Vechta) and the Münsterländische Tageszeitung (Cloppenburg), refer to the name Oldenburger Münsterland . Both newspapers merged to form the OM media group in 2020.