Selm is a city in North Rhine-Westphalia , Germany . It is located in the southern Münsterland north of the Lippe . Selm has been part of the Unna district and the Ruhr Regional Association since 1975 .

Selm lies within the large landscape of the Westphalian Bay in the main natural area of the Kernmünsterland on the southwestern border. The district of Bork in the south borders on the Lippe , the Ternsche farmers in the northwest on the Stever . The Ministerial Conference for Spatial Planning determined that Selm lies within the Rhine-Ruhr metropolitan region . Accordingly , Selm is officially assigned to the urban agglomeration of the Ruhr area . The city of Selm therefore also took part in the large-scale cultural project Ruhr.2010 .

Coal -bearing carbon lies beneath the Cretaceous marl layers in Selm . In the description of the northern migration of the Ruhr mining industry , the Selms area is included in the Lippe zone. Today coal mining takes place exclusively in this zone, which extends into the Münsterland. The degradation Selm was most recently done by the Ost colliery of the German hard coal AG .

The original community area was formed from the farmers' communities of Dorfbauerschaft, Beifang, Ondrup, Ternsche and Westerfelde and has changed very little from 1815 until the incorporation of Borks.

The highest point in the city is at 111.7 m above sea level on the corner of Borker Strasse / Cappenberger Damm / Freiherr-vom-Stein-Strasse.

The lowest point at 44.0 m above sea level is in the Dahler Holz on the Lippe.

The first traces of settlement date from the Neolithic Age after excavations in the Ternsche peasantry.

The place was first mentioned in the year 858 as paying interest to the Reichsabtei Herford with the name "Seliheim". The current name “Selm” later developed from this via “Selheim” and “Selhem”.

From the beginning of the 19th century until 1946 Selm belonged to the Prussian province of Westphalia . After 1815, the Bork mayor's office was formed from the parishes of Bork, Selm and Altlünen . In 1843, with the introduction of the Westphalian rural community order, the mayor's office became the Bork office with the communities of Bork, Selm and Altlünen . The office belonged to the Lüdinghausen district until the end of 1974 .

In 1906 the sinking of the Hermann colliery began in bycatch. The industrialization brought an increase in the population of the community Selm from 2,000 to 10,000. The colliery employed up to 3,500 people. The high number of unemployed due to the closure of the mine in 1926 put the community in an economic emergency.

After the Second World War, many miners - especially the miner Achenbach colliery in the Brambauer district of Lüner  - and retired miners lived with their families in Selm-Bycatch. Over time, the community developed into a residential area for many people who work in the Ruhr area. In 1958, Selm celebrated its 1100th anniversary.

Selm achieved nationwide fame through the campaign “(K) ein Schild in Selm” carried out by ADAC and MSC Bork in 1997, during which 600 of the 1100 traffic signs in Selm were covered with a yellow bag for a week. The aim of this campaign was to draw attention to the growing forest of signs. After the action, 43 percent of the signs were removed. This campaign is still referred to in various media today. The ADAC even speaks of the "Selmer Model" when cities try to contain their forest of signs. 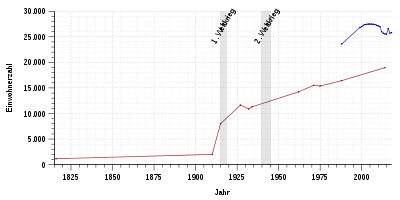 Population development of Selm from 1815 to 2017. The lower red curve shows the area status from 1975 as in the first table. The upper blue curve corresponds to the second table

On December 31 (1987 and 2011: results of the census) the city of Selm had the following population figures:

According to the 2011 census , in 2011 30.1% of the population were Protestant , 49.1% were predominantly Roman Catholic and 20.8% were non-denominational , belonged to another religious community or did not provide any information. The number of Catholics, and especially Protestants, has fallen since then. According to the municipal statistics (as of January 31, 2019) 27.1% (7,282) were Protestant, 44.0% (11,836) were Catholic and 28.9% were communityless or without information.

The main political body of the city is the city council, which decides on the affairs of the municipality.

After the local elections on May 25, 2014 , the distribution of the 32 seats in the city council was as follows:

Only parties and voter communities that received at least 1.95 percent of the votes in the respective election are shown in the list.

The coat of arms shows a golden linden tree in red, in the shield head above it in gold three red roses with golden lugs and green sepals. This coat of arms was approved by the district government in Arnsberg in 1977.

The linden tree, symbol of the Vemlinde in Selm, comes from the old Selmer coat of arms. The picture was already part of a coat of arms created in 1966 for the municipality of Selm. Underneath was the gate entrance and the village driveway to today's old town. The Vemeststätte in the Westerfelde peasantry in Selm is the oldest evidence of municipal legal activity on site. Of the 23 leaves in today's coat of arms, eight can only be seen with the tip in the outer leaf wreath, thirteen can be seen in full in two lateral groups of five and in a group of three above. Two half can be seen in the lower leaf area. These two lower leaves are only added to the left and right of the summer linden tree in today's coat of arms. The color of the linden tree was changed for today's city coat of arms.

The three roses come from the coat of arms of the von Stein family . The heraldic rose has been a symbol of a coat of arms used throughout Germany since the 12th century. The color red comes from the basic color of the Westphalian coat of arms. The yellow was added since the ecclesiastical rule. The colors correspond to the historical colors of the Prince-Bishop of Münster , who exercised the power of rule in the area of ​​today's Selm until his deposition (1803). At the same time, there are the historical colors of the coat of arms of Cappenberg , which goes back to the Counts of Cappenberg.

In Selm there is the Cappenberg Castle Theater .

In the main and side wings of Cappenberg Castle , some rooms are used as a museum. The LWL State Museum for Art and Cultural History has a permanent exhibition on the history of Cappenberg and Baron vom Stein in the side wing. The district of Unna presents changing art exhibitions in the main building of the castle. Currently closed for renovation work.

A fire brigade museum is housed in a building of the former brewery in the district of Cappenberg.

→ Main article : List of works of art in public space in Selm 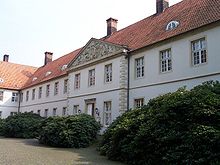 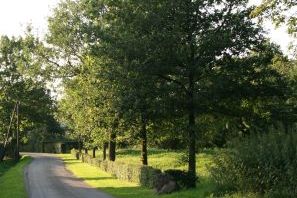 The Heimatverein Selm was founded on November 13, 1925 by H. Pennekamp, ​​director of the Selm Rector's School.

Art Prize of the City of Selm

The City of Selm Art Prize was awarded to Heinz Cymontkowski in 1988.

Culture award of the city of Selm

Economic and cultural promotion award of the city of Selm

Since 2014, the Wikult has been taking care of the award with the help of the citizens.

There are three train stations in the town of Selm on the Dortmund – Enschede railway line :

The following federal (B) and state roads (L) run through Selm :

In Selm there is a regional line R19, which connects Selm with the neighboring cities of Lünen and Lüdinghausen and is operated by the transport company Kreis Unna .

All-day care is offered at all Selmer primary schools, which has been organized and carried out by the Ganz Selm eV association since the end of 2011 .

The building of the former Luther school in Beifang was demolished in September 2018.

The city of Selm does not have its own hospital. The St. Marien Hospital in Lünen takes care of the medical care. There are also general hospitals in the neighboring cities of Lüdinghausen, Werne, Lünen-Brambauer and the children's clinic in Datteln.

Bicycle station in the Selm-Beifang train station (Dortmund – Enschede railway line), entry point between the Ruhr area and Münsterland, as well as a connection to the attractive cycling routes 100-Schlösser-Route and Römerroute . The city is a popular destination for day and weekend trips. A campsite is located on the nearby Ternscher See .

The research and technology center for load securing opened in February 2014. This has an area of ​​123,500 square meters on which driving tests with motor vehicles are carried out, for. B. to investigate driving behavior on wet roads or new technologies for securing loads.

Cities and communities in the Unna district