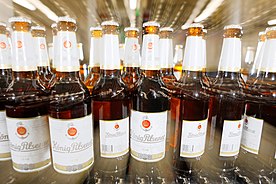 König Pilsener bottles in the bottling of the König brewery

The König-Brauerei is a brewery in Duisburg - Beeck , in which the "König Pilsener" (colloquially also: KöPi ) is brewed. Around 1.1 million hectoliters of beer are brewed every year.

Theodor König , born in the farming community of Übbenhagen (today Selm - Cappenberg ) in 1825 , founded the brewery in 1858 in the rural community of Beeck, which was not yet part of Duisburg . The König brewery's first annual output was 206 hectoliters. With the beginning of the industrialization of the Ruhr area in the 19th century, the brewery also grew. At the turn of the century, the output was already 50,000 hectoliters (2016: around 1.1 million hl).

The brand name “König Pilsener” can be verified for the first time in 1911. The beer, formerly known for its hoppy tartness, was refined in its recipe and increasingly adapted to the taste of the masses. The First World War and the economically and politically unstable conditions of the Weimar Republic hit the König brewery. Nevertheless, the brewery sold its top product König Pilsener in the 1920s beyond the Duisburg area.

During the Second World War , the brewery was almost completely destroyed in an air raid in November 1944. After the end of the war, the company began to rebuild and built one of the most modern breweries of its time.

From 1950, König Pilsener was established as a national beer brand and in 1980/81 took over the market leadership in the Pilsner sector and among private breweries. In 2000, the owner family sold the König brewery to Holsten Brauerei AG. The Holsten Group was sold to the Danish brewing group Carlsberg in 2004 , which broke it up and sold the König brewery to Bitburger Holding . The König brewery has been part of the Bitburger brewery group since 2007 and is marketed in large parts of Germany.

König Pilsener is a bottom-fermented full beer with an alcohol content of 4.9% by volume and an original wort of 11.5%.

König Rotbier is a bottom-fermented full beer with 100 percent aroma hops and special malts. The alcohol content is 5.2% by volume and the original wort is 12.4%.

TH. König Zwickl is a bottom-fermented, unfiltered Zwickl beer with an alcohol content of 5.3% by volume and an original wort of 12.8%.

König-Alt, a variant of Altbier brewed in the 1970s , has been discontinued. König Export and König- Malz are also no longer part of the product portfolio .

The products of the König-Brauerei are available in a variety of container forms :

The König brewery with its König Pilsener brand is one of the pioneers in German beer advertising . It was the first German brewery to launch national advertising campaigns back in the 1950s. Even later, König Pilsener was advertised with great effort on German television, for example with the “König-Treuen” campaign in the 1960s and 1970s with Hermann-Josef Abs and Maria Schell or at the beginning of the 1980s with the “Lady with the Red Cap".

From 2005 to 2010 König Pilsener advertised with the slogan "The King of Beers". Under this motto, the campaign presented celebrities from different walks of life. Til Schweiger , Boris Becker , Charles Schumann , Dieter Müller and Herbert Seckler appeared as brand ambassadors . In 2011 spots with the slogan “Today a King” were produced, from which advertising motifs were derived. In autumn 2016 the slogan was changed to “And now a king”.

The current König Pilsener campaign started in July 2017. At the same time, König Pilsener renewed the entire brand identity and brought the anchor back into the logo. It was part of the logo from 1911 to 2003.

In addition to football activities, König Pilsener is also a sponsor of the EV Duisburg and Moskitos Essen ice hockey clubs . The brand is also the namesake of the König-Pilsener-Arena in Oberhausen .